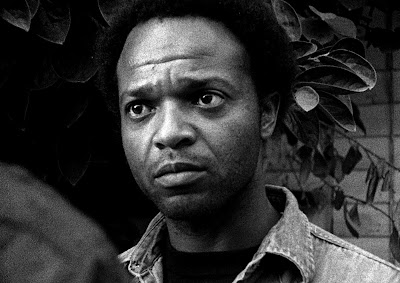 I’ve been asked several times why I am pursuing a goal such as completing this entire list of movies. It’s a fair question, and it’s one I ask myself when I force myself to struggle through 150 minutes of silent melodrama. There are a number of reasons to struggle on, though. One of them is films like Charles Burnett’s Killer of Sheep. There is no way I’d have picked this off a library shelf if it wasn’t on a list, but it’s films like this that make the list worthwhile.

Briefly, this is the story of Stan (Henry Gayle Sanders), a man who works in a slaughterhouse. He helps herd the sheep into the line, hangs them up, kills them, and skins them. We see a bit of this throughout the film. He is attempting to make a life for his family and for himself, and he is constantly knocked back and knocked down by the everyday struggle of existence.

Stan and his family are poor, a reality he tries to avoid admitting to himself by saying that he gives things away to the Salvation Army, and poor people can’t afford to do that. Nevertheless, he is always short of money and always trying to think of a way to come up with more. What he’d really like is a different job, one that wasn’t such a boring and painful daily slog through skinned sheep. He and his wife (Kaycee Moore) barely get by, and every step forward is joined by an equivalent step backward.

For many people, this is reality. For Stan, though, there feels like there should be more. Stan has a poetic soul. He finds what enjoyment he can in his time outside of work—his kids, the feel of a china cup against his skin. But he has no time for himself really, or for relaxation. The house needs constant repairs, and when he is not at work, he is fixing something, trying to keep ahead of the entropy that he sees both in his house and in the surrounding neighborhood.

Like many films of this sort, there isn’t a tremendous amount of plot to deal with. Stan goes to work, comes home, deals with a setback, and moves on. Instead, this is a character study of the man himself. Stan is smart enough to see that there should be more to his life, and poor enough to realize that there probably never will be. Even trying to relax ends up with the minor tragedy of a flat tire, the realization that he hasn’t been able to afford a spare, and the limp back home, his day off wasted with something he didn’t want to have to deal with.

What we discover is that Stan has no control over his own destiny. He is instead boxed into the life he lives, much like the sheep he kills. No matter how he tries to escape—finding a new job, fixing the roof of the house—nothing he does to gain control lasts, or even moves him a step forward. His life, such as it is, is his life and always will be.

While certainly relevant for the Black experience in 1977, Killer of Sheep resonates even more fully today, in a world in which the economy doesn’t seem to ever get any better and everyone seems to be doing everything he or she can to merely tread water and stay in place. Stan’s plight is the plight of most of us, locked into places we’d like to escape from, knowing that the value of our own lives and souls is more than we are being paid for them.

Many of the performances in this film are amateurish, which comes from the fact that Burnett was forced by his minimal budget to use amateur actors. This can be easily overlooked based on the strength of other performances. Sanders is especially strong. He is expressive, pained, and easy to identify with, and is surprisingly nuanced throughout. While many of the peripheral and tertiary characters are wooden and say lines like they are reading them, for the most part it isn’t too noticeable.

All of this leads me to the title of this film. On the surface, it’s simply a statement of what Stan does for a living. He works in a slaughterhouse and he kills sheep. It’s not a difficult stretch, though, to equate Stan to those very sheep that he slaughters. He’s less the killer and more the victim, lining up in the pen and awaiting his turn to be trussed and hung from a hook while the cruel world skins him and takes from him everything he has to offer, using up everything but the bleat. Stan is emotionally and physically crushed before our eyes, and has as much hope of getting away as the sheep do. Life, or society, or his existence, is the killer of sheep, and Stan’s fate is that of all of us.

Ponder that for 10 minutes and then go enjoy your day.

Why to watch Killer of Sheep: A portrait of real life and real struggle.
Why not to watch: Skinned sheep heads.
Posted by SJHoneywell at 11:55 PM