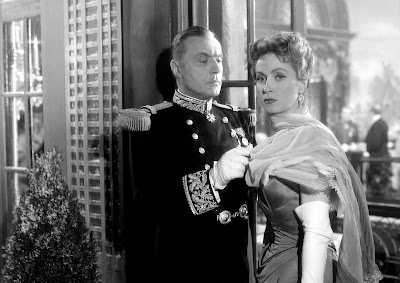 There are plenty of movie tropes that I don’t fully understand. One of these is the romance between two people who are each married to the wrong person. It’s not simple infidelity; it doesn’t surprise me that movies go back to that particular well time and time again. No, it’s actual full-blown romance between people two people married to others that I don’t understand. Movies are full of this story. Brief Encounter is nothing but this, and Now, Voyager certainly touches on this as well, and these are merely two examples in a list of at least dozens. These days, often the characters are merely engaged or involved with the wrong person when the right one comes along, but the trope lives on. A very good example of this is Madame de…, more commonly known in the U.S. as The Earrings of Madame de…

In many ways, Madame de… is a variation on Othello, substituting earrings for a handkerchief and attempted infidelity for assumed transgression. In movie terms, this is a posh, society version of Winchester ‘73 with a pair of earrings as the focus instead of a rifle.

Madame Louise de… (Danielle Darrieux), whose last name is never mentioned, has debts she needs to pay off and would prefer her husband not know. Looking through her jewelry and expensive clothing, she determines that the best course of action is to sell her heart-shaped diamond earrings back to the jeweler from whom they were purchased. Normally, this would not be noteworthy except that the earrings in question were given to here as a wedding present by her husband, General Andre de… (Charles Boyer).

To cover the sale, Louise pretends to lose the earrings at the opera, causing her husband to involve the police; he believes them stolen and would like them returned. The jeweler brings them back to the general, who buys them again and gives them to his mistress, who is leaving for Constantinople. Once there, she promptly loses the earrings at the roulette wheel. Placed in a jeweler’s window, they are purchased by Baron Fabrizio Donati (Italian director Vittorio de Sica) and brought back to France.

And it is here that the only-in-a-movie coincidences begin. Donati meets Louise, since she is the wife of Andre. The two immediately become involved with each other, evidently with the full knowledge of the general, since he warns Donati about the flirtatiousness of his wife. The two find themselves running in the same circles and in a very interesting montage, we see them dancing together at various functions commenting on how long it’s been since they’ve seen each other.

Naturally, he gives her her own earrings as a gift, and since they have come from him this time, now Louise loves them and will not give them up. She conspires again, this time to “find” them in one of her drawers, not knowing that her husband had already purchased them a second time and given them away.

We go through several more permutations of this before the end of the film, the same jeweler getting them back a few more times and both successfully and unsuccessfully attempting to sell them back to the general. What’s interesting here is how the earrings have changed as a symbol. Where at the start of the film they were the easiest thing for Louise to part with, they become something worth sacrificing everything for by film end simply because of who gave them to her. Initially a symbol of her relatively loveless marriage, they become a symbol of her eternal dedication to Donati.

There are some interesting things going on in this film. While it is unquestionably a romance at its core, initially I almost classified it as a comedy. There’s certainly many comedic elements to the film, particularly in the first act when the general buys the earrings back from the jeweler and believes he has curtailed the entire problem and his wife’s potential embarrassment by sending them out of the country.

I’m also fascinated by the openness of the marriages. It’s as if the rule for infidelity is that it’s fine as long as no attention is specifically called to it. Both Louise and her husband have evidently a series of lovers, infatuations, and romances. All of this is seen as a matter of course and not a problem provided that each partner doesn’t have specific knowledge of the other party. The minute the general realizes that Donati is making time with his wife, the kid gloves come off and things become serious. It’s an odd moral code.

I also really like Vittorio de Sica in this film. I like it when people best known as directors take major roles in films directed by other people. It’s a chance for them to put into practice the advice they give their charges when directing, and I often find their performances interesting. Like Preminger in Stalag 17 or von Stroheim and de Mille in Sunset Blvd., de Sica turns in a credible performance here, one worthy of being taken seriously.

It’s a good story, if one that I have a difficult time wrapping my mind around in places. The coincidences are too big and the trope has become so standard that I can’t help but find some of the film rather predictable. I like the injection of humor, though; it adds a sense of reality to something that could have otherwise been very dry and serious. More importantly, Ophuls used his camera like no one before him, from great close-ups to his montage scenes and camera use to suggest motion and urgency, this is a film with true credentials.