When it comes to filming the dirtier side of life, sex is what the people want to see. There are undoubtedly more films that showcase sex—not even getting into the pornographic side of the world—than anything else. Tune into Cinemax some night after about 10:30 and see how many bad cop movies/slasher movies/etc. take place in strip clubs, for instance. Of almost as much interest to the average person is insanity, and plenty of films explore this as well. Many of these are pretty bad, just like most sex films are pretty bad. But some of them are also pretty good, even beyond the shock appeal and the thrill of watching something that feels like should be going on behind closed doors. 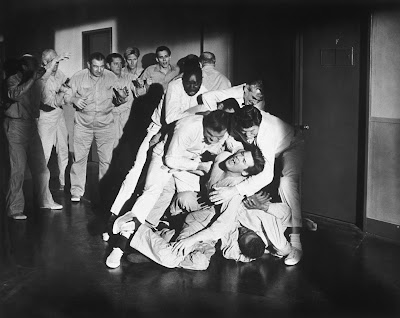 Shock Corridor is such a film. Looking to expose a killer in the local mental institution, ace reporter Johnny Barrett (Peter Breck) undergoes a year of training to pose as a mental patient. He has his girlfriend, singer and stripper Cathy (Constance Towers), claim that Johnny is her brother, and that he’s attempted to force an incestuous relationship with her. The doctors at the hospital agree to put him under observation, and get Johnny declared legally insane, committing him to the ward.

As Johnny undergoes treatment, he locates the three men who were the witness to the crime committed as well as other inmates like Pagliacci (Larry Tucker), a grossly overweight man who believes himself an opera singer. The first witness Johnny speaks to is Stuart (James Best). Stuart was captured by the communists in Korea and brainwashed, and now believes himself to be General J.E.B. Stuart, and replays Confederate battles in his head. In a moment of lucidity (something that happens with each witness), Stuart reveals that the killer wore white pants, and is thus either an attendant or a doctor.

Witness number two is Trent (Hari Rhodes), an African-American who was the only non-white at a prominent university. Eventually, the constant abuse broke him down, and he spends his days split between his old personality and one in which he is a racist and a founder of the KKK. From Trent, Johnny learns that the killer was not a doctor, but an attendant.

Third on the list is Dr. Boden (Gene Evans), a man who worked on the Manhattan Project, and has regressed to a childlike state, a regression that he admits to having done willingly during his moment of lucidity. He reveals the name of the real killer to Johnny, closing the case.

The problem is, and this is the reason to watch the film, of course, is that his time spent in the institution is starting to have a real effect on poor Johnny’s mind. Initially, he has terrible dreams about what might happen to the attractive Cathy while he is in stir. After all, he thinks, Cathy is attractive and talented, and works in a strip show—there’s no telling what one of the customers might get up to. Eventually, though, he starts to believe in the story he invented to get thrown into the ward in the first place.

There are plenty of lurid moments. At one point, while trying to get on Stuart’s good side, for instance, Johnny is trapped in the nymphomaniac ward, and nearly torn to shreds by women desperate for any man. While this might sound like the sort of scene Russ Meyer might film, it’s actually pretty terrifying. There’s nothing sexy about this scene, and quite a bit that is horrible, and Johnny comes out of the ordeal bandaged.

In his attempt to win over Trent, Johnny helps Trent go on a race-fueled explosion, which earns Johnny a trip to electroshock therapy—again lurid and again frightening and terrible. This episode creates a further indication of Johnny’s deteriorating mental state: frequently his ability to speak gives out and he’s unable to communicate.

There’s no doubt that Shock Corridor was made with the lurid in mind, and it seeks to shock the viewer at every turn. One of the most effective moments of this comes with a full-blown hallucination on the part of Johnny, featuring rain in the middle of the ward and some sudden color photography. Once this happens, it’s evident that like the other patients, Johnny is having moments of insanity and lucidity. The question is which will come out on top.

Despite the lurid nature of the topic and the story, this is a great film. It’s not an easy watch, but it’s a worthy one, and this is a film I will definitely revisit once I’ve completed the entire list. 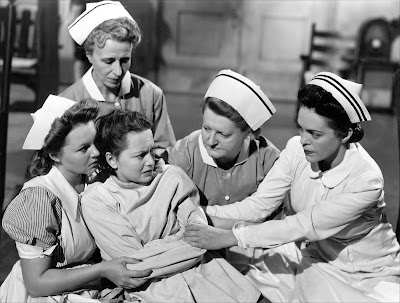 An earlier film about the insane asylum is The Snake Pit. This is a far less lurid tale, perhaps because of its age, and perhaps because it attempts to paint a realistic picture of schizophrenia instead of the amped-up version presented in Shock Corridor. Certainly there are a number of Hollywood touches to this film, but this is a harrowing account of the illness of Virginia Cunningham (Olivia de Havilland) and the attempts to get to the root of her particular mental state.

We start in the hospital, called Juniper Hill (and if you’ve ever read Stephen King’s It, now you know where he got the name of his mental institution from), and Virginia’s awakening. She has no idea where she is or how she got there. We learn briefly in a flashback from her husband Robert (Mark Stevens) that the two of them met in Chicago, and that she ran out quickly one night when they had plans. He eventually found her again after he had moved to New York, and while she seemed both desperate and unable to believe that he truly loved her, they were married. Shortly thereafter, she broke with reality completely, and was institutionalized.

We learn what has happened to Virginia as her doctor, Mark Kik (short for Chrzanowski, and played by Leo Genn) learns of her troubled past. Virginia is convinced that it is impossible for a man to love her, or so we think at first. What we come to understand is not that she finds herself unlovable, but that she seems to be plagued with a curse—men who care about her don’t fare too well when Virginia isn’t happy with them or wants a break from them. A few terrible coincidences lead to schizophrenia, and to shock treatments and hydrotherapy.

What’s interesting here is that this film caused a huge reaction in the country at large—mental institutions were revamped because of this film. This is despite the fact that this film is in no way an expose of institutions. If anything, the wrath of the reformers must have centered on such places because of the character of Miss Davis (Helen Craig), who appears to be a sort of template for Nurse Ratched, although with far less malice and power.

While The Snake Pit succumbs to the Hollywood ending, this in no way diminishes its power, or the incredible force of de Havilland’s portrayal. She gives here one of the great acting performances ever recorded, and I’ll say it here—the woman was robbed at the Oscars.

The Snake Pit is too clinical at times, and fast forwards past many aspects of treatment. However, few things resonate so completely as Virginia’s first moments in what she calls the snake pit—it’s a moment of despair and realization brilliantly filmed, and one that still resonates as powerfully now as 60 years ago.

Why to watch Shock Corridor: It doesn’t spare the lurid details.
Why not to watch: It’s hard on the psyche.

Why to watch The Snake Pit: One of the greatest acting jobs ever committed to film.
Why not to watch: Olivia de Havilland far less glamorous than you’re used to.
Posted by SJHoneywell at 11:21 PM