Emphasis on the Last Syllable

[Author’s note: For slightly more than 14 months, I have kept this blog rated PG-13. I have toned down my normally obscene self and kept the swearing to a minimum. I knew that someday I would come across a film that pulled my naturally profane nature to the surface. I didn’t know when it would happen; I only knew it would. Well, today I discovered the film that brought me at least temporarily out of my swearing shell.] 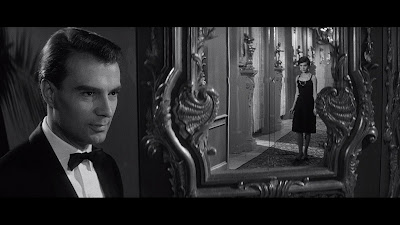 Years ago, my brother Tom had a book called “The 50 Worst Films of All Time.” Naturally, a book like that was going to be wrong on virtually every count; there are certainly at least 50 films worse than every film included in that book (proof? It didn’t include Manos: The Hands of Fate). But it was a fun book to flip through. Imagine my surprise to see at least four films from that book on The List: Zabriskie Point, Ivan the Terrible, Bring Me the Head of Alfredo Garcia, and today’s entry, L’Annee Derniere a Marienbad (Last Year at Marienbad).

This is the first of these films that appear as both must-see and wretchedly bad that I have encountered thus far. Since its initial opening, Marienbad has received a number of positive reviews. It has a divided reaction from its viewing public. There are those who find it filled with meaning and great possibility (Roger Ebert, for one), and those who find it to be 95 minutes of smelling its own exhaust and applauding itself. I was curious to see which camp I’d fall into.

Marienbad is not the worst movie I have ever seen. It probably doesn’t rank in the bottom 100 of films I have seen in my lifetime, and that’s even if I don’t include what I watched on Mystery Science Theater 3000. It is, though, the most pretentious, filled with itself, navel-gazing piece of shit I have ever encountered. This movie is so filled with its own artistic pretense that it farts Picassos in waltz time.

Here’s what you get: we have three main characters and a bunch of other people wearing fancy clothes and standing around like J.C. Penney mannequins. Our first character is A (Delphine Seyrig, who pissed me off last year by starring in Jeanne Dielmann). A is nothing more than an attractive, sometimes mobile thing to hang slinky dresses and feathery dressing gowns on. She’s in a gigantic hotel with M (Sacha Pitoeff), her skull-faced maybe-husband. While they are supposed to be relaxing, what they really do is go to an occasional show, stand around, and stare at things. Also at the hotel is X (Giorgio Albertazzi), who claims to have had a passionate affair with A the previous year. It might have been at Marienbad. Or it might not have happened. Or something. Anyway, he spends the whole movie trying to convince her that they are madly in love with each other. She has no memory of this, because evidently in addition to being someone who moves exclusively in slow motion, she’s also a fucking amnesiac.

That might actually be interesting if the film had done anything with it. Instead, virtually the entire film consists of three things. First, X walks down the endless corridors and hallways of the giant, Cleveland-sized hotel and narrates it. When I say he narrates, what I mean is that he says the same thing over and over about corridors and empty rooms and walls and more corridors and rooms and doors and statues and people and things and air and fucking molecules and Jell-o pudding pops and fruit bats and…

Sorry. He doesn’t talk about fruit bats or Jell-o. Or air molecules.

Second, X talks to A in the second person, telling her all about what they did the previous year at another giant hotel with big fuckin’ statues that are possibly the same statues at this hotel or maybe not because maybe it never happened, and she certainly doesn’t have any memory of it. Regardless, he tells her all about her room there in great detail, and what she wore, and what they talked about (mostly the statues), and everything else. When he gets done with one of these monologues, she usually says that she doesn’t remember and that she’d like him to leave her alone, which he never does. Also during these scenes, we frequently change locations between sentences, and almost as frequently change times of day. Night time, day time, night time, lunch time, morning, night. These time changes do not appear to matter to the flow of the conversation.

That’s it. There’s 95 minutes of people standing next to each other, looking in opposite directions, and not moving while one of them talks about what they may have done or not done together or alone at a similar hotel that might have been this one or was possibly Marienbad when they were or weren’t there the year before.

I hated this film with the sort of passion I typically reserve for televangelists, people who interrupt constantly, and those motherfuckers who don’t use their turn signals. I want to punch everyone involved with this film. I want to punch this film in the celluloid equivalent of its uterus and/or testicles. I want to gender-neutralize it so that it cannot procreate and fill the world with its incomprehensible little art babies. It makes me feel like the narrator in Fight Club when he says he wanted to kill every panda that wouldn’t fuck to save its species. I want to let the original negatives rot and I want to film this happening, because that will be more interesting than this film.

I don’t mind art films. I genuinely don’t. Sometimes, they’re a lot of fun or at least have something interesting to say. This film was as fun and interesting as picking lint from my asscrack. Fuck this movie, fuck the people in it, and fuck Alain Resnais. I hold this film specifically responsible for why Americans think French people are snooty bastards and for why the French think Americans are incestuous, brainless primate sphincters.

50 Worst Films of All Time? Probably not. 50 Films I’d Like to Throat Punch and then Watch Drown in its Own Vomit? Top of the list, baby. Top of the list.

Why to watch L’Annee Derniere a Marienbad: With so many possible interpretations, it’s like a Choose-Your-Own-Adventure book.
Why not to watch: The adventure sucks.
Posted by SJHoneywell at 11:25 PM