Film: Within Our Gates
Format: Internet video on laptop. 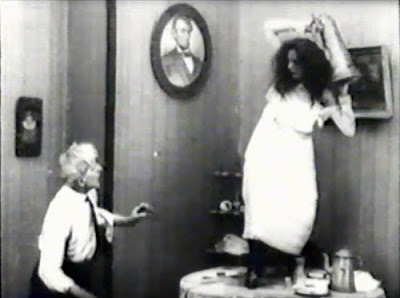 The List exists for a number of reasons. It’s a celebration of films that are truly great for one reason or another. Some are simply great films; others are important because of the innovation they brought to the language of cinema. Others, like Within Our Gates are important for historical and cultural reasons. This film is the earliest film produced and directed by an African American.

Like a number of films on this list, I was prepared to gut this one out. I made the commitment at the start of the month to attempt to locate and watch the earliest remaining film on the list every week, and it turns out that this week, it was Within Our Gates’s turn. A no-budget film with amateur actors, and silent doesn’t sound like my idea of a good time. But, as I said, The List exists for a reason, and committing to watching the entire list means sitting down with every movie and giving it its just due. I braced myself for a rough ride.

The rough ride never showed up. Okay, there were certainly some bumps, and it was far from butter smooth, but all in all, I dreaded this film far more than its reality warranted. This isn’t to say that Within Our Gates doesn’t have problems. It suffers from a number of issues, not the least of which is that it tries to do far too much with its short running time. There are three distinct stories here—the plight of a school, the path of a criminal, and the back story of one of the main characters.

But I’m getting ahead of myself here, as usual. This is the tale of Sylvia Landry (Evelyn Preer), who is engaged to Conrad Drebert (James D. Ruffin). Unfortunately for Sylvia, her cousin Alma (Flo Clements) is also in love with Conrad, and arranges for him to spot Sylvia in a compromising position with another man, causing him to call off the engagement.

Sylvia responds to this by returning to the South and a black-only school whose director is too kind-hearted to turn away any child, even those too poor to pay the meager amount needed for education. His tenderheartedness causes the school to approach bankruptcy, so Sylvia heads north to raise the $5,000 needed to keep the school open.

It is here that we encounter the first real racism in the film. In the north, Sylvia encounters three people. First is Dr. Vivian (Charles D. Lucas), who catches a thief who has stolen Sylvia’s purse. He is quickly taken with Sylvia. Also encountered is Elena Warwick (Mrs. Evelyn), a wealthy philanthropist who nearly runs Sylvia down with her car, and then discovers Sylvia’s quest to save the school. Third is Geraldine Stratton (Bernice Ladd), a woman so dead set against non-whites that she opposes women’s suffrage lest the black woman be given the right to vote.

With money in hand, Sylvia returns to the south, while Dr. Vivian finds out about her past. She was raised by a poor but honest black family who were lynched for a crime they didn’t commit. Sylvia manages to escape, but is nearly raped by a man who turns out to be her biological father. Pretty creepy if you ask me.

What’s interesting here is that while many of the racial problems here are unquestionably the fault of the white people, many are equally the fault of the downtrodden African Americans themselves. Larry (Jack Chenault), the criminal who is also the step-brother of Alma preys on those he can find by swindling them at every opportunity. More insidious is the preacher Ned who realizes he is “selling [his] birthright for a ‘mess o’ pottage’” by telling his congregation that they should remain ignorant and thus get to Heaven while the rich white folk will be condemned to hell.

Just as damaging to the situation of Sylvia and the other honest and hardworking black folk is Efram (E.G. Tatum), who accuses Sylvia’s adopted father, raises the townsfolk against him, and ends up lynched himself, paying for his terrible misdeeds in the most awful way possible.

Certainly there are real problems with this film. It is often amateurish, and while there are a few scenes of action and excitement, a great deal of the film is nothing more than people sitting in rooms miming conversation with each other, massive numbers of intertitles (that are probably the best part of the film), and people sitting behind desks.

Micheaux did the best he could with what he had to work with. That his efforts aren’t the professional work of other directors of the time is no shame. In many ways, Micheaux is the first independent filmmaker. Within Our Gates is worth watching not simply because it is the earliest cinematic document of a black filmmaker. It should be watched on its own merits, melodramatic and overwrought though they are. It’s too much for what it is, and could easily lose 20 minutes of its already short running time, but as a piece of history, it’s something worthy of note.

Why to watch Within Our Gates: A rescued historical document of great importance.
Why not to watch: Frequently amateurish.
Posted by SJHoneywell at 6:45 PM

Email ThisBlogThis!Share to TwitterShare to FacebookShare to Pinterest
Labels: drama, Oscar Micheaux, Within Our Gates