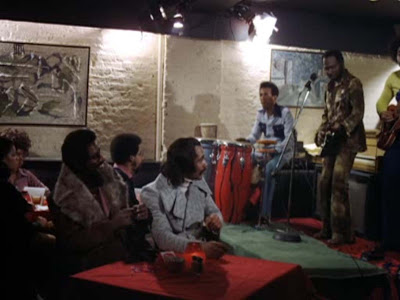 A film like Superfly (or if you prefer, Super Fly) brings up a number of interesting questions. One of the reasons the film is worth watching is because of the questions it raises. I’m certain that most viewers are looking for something different than I am here and will have a different set of questions than I do. But here goes:

Is this the greatest film soundtrack ever recorded? I think it may well be. Plenty of films have a great song or two, and fans of musicals will no doubt tout their favorites, but for my money, the Superfly soundtrack is the closest thing to perfection I’ve ever heard. It suits the mood of the film as if Curtis Mayfield had written the script as well as the music; it’s so in tune that it feels to have come from a single mind. It’s also a soundtrack that, like Shaft before it, attempted successfully to latch onto a particular musical subculture. It would be a great soundtrack with those two facts. What puts it in the elite, though, is that the songs truly kick ass on their own. Curtis Mayfield was a bona fide genius. This film, entertaining as it is, would be half as good without the soundtrack.

Does it glorify drugs and drug culture? Perhaps it does. I can see that interpretation of it. Certainly our main character, Priest (Ron O’Neal) lives a lifestyle that would be the envy of any number of 1970s ghetto residents and not a small number of suburban residents as well. The man is smooth. He dresses in a unique and arresting fashion, drives a sweet pimped-out Caddy, has two girlfriends (one white--think about that in terms of 1972!), and carries a huge bankroll with him everywhere he goes. As his friend and business partner Eddie (Carl Lee) comments, “8-track stereo, color T.V. in every room, and can snort a half a piece of dope every day? That's the American Dream...” For many people, particularly those living in rat traps on government assistance, no other dream seemed possible or worth attaining.

After saying all that, can you justify the opinion that it doesn’t glorify drugs and drug culture? Yes, I can. Because the entire plot of the film is Priest’s desire to get out of the business. He’s a hustler, and he’s always been a hustler. He’s told that he doesn’t have the stomach to be a pimp (and he doesn’t) and pushing drugs is all he knows. But he tells his girlfriend Gloria (Sheila Frazier) that he wants out. He doesn’t know what he will do, or what he can do, but with one last score and a fistful of cash, at least he’ll have options. What he really wants is freedom from the life.

Is it racist against Caucasians? It may be, but I think if it is, it’s a symptom of the times in which it was made. The Civil Rights era was ending (or ended) and not enough had changed. If there was anger against the white community as a whole, it was understandable even it if makes this intensely white guy uncomfortable at times. Hey, I turned 5 the year this film was released. I wasn’t oppressing anyone, Priest.

Is it racist against African-Americans? Again, it may be, and if it is, I think it’s unintentional. There are a few lines that I don’t believe are intended as racism and probably didn’t read as racism in the early 1970s, but do now. When Priest tells someone that he has hired killers—white ones—the implication is that black killers might not be as good, or might be stoned or wired up, or perhaps simply incompetent. The idea that the only way for a black man to make it in the world is as a hustler of one thing or another is certainly a product of its time as well—although it would not surprise me to learn that many people still feel the same way. What was real in 1972 comes across as caricature in 2011, so if this racism exists, it exists merely as an artifact of the inherent racism of the time in which the film was made.

Who is central to this story? The easy answer is Priest himself, and almost every scene features Priest at its center. However, the most telling and interesting comments come not from Priest but from the characters around him. It is through his connection Scatter (Julius Harris) that Priest discovers that The Man will never let him leave the life—The Man exists to keep the brother down, and lets him up only long enough to turn a profit on him. It is through Eddie that we learn the true moral heart of the story—for some, this is the American dream, and that hustling is the only game The Man lets a brother play. From Gloria, Priest learns that he doesn’t need money to live away from the life, a truth he will not accept. From Fat Freddy (Charles McGregor) he learns that every man has a breaking point and that when there is money on the line, no one can be trusted.

Is this the most important blaxploitation film ever made? Good question. It certainly ranks in the top several--Shaft, Boyz N the Hood, and Sweet Sweetback’s Badasssss Song sit in that same constellation.

Is it any good? Yes, yes it is. The fashion comes off as mildly amusing these days, but even though lapels have shrunk and men no longer wear floor-length coats and fedoras, there is a groove to these characters that is unmistakable. The story still plays, albeit with more racist overtones and undercurrent than a similar film might have today. And, of course, it does have that unmistakable soundtrack that became the sound of an entire generation. There’s a reason that the soundtrack made more money than the film.

Do yourself a favor and watch this. Do yourself another favor, too. Even if you don’t watch this right away, go right now to Pandora or Grooveshark (or even YouTube) and hunt up the Curtis Mayfield tracks like the title song, “Freddie’s Dead” and “Pusherman.” If you can’t groove on these tracks, this experience might be lost on you.

Why to watch Superfly: A powerful cast, a timeless story, and the funkiest bass lines ever laid down ("Freddie's Dead" will rock your world).
Why not to watch: You’re even whiter than I am (and that would be difficult).
Posted by SJHoneywell at 11:17 PM