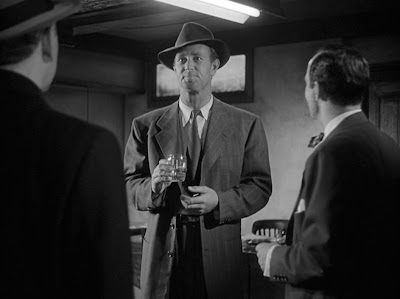 With any genre of film, there are half a dozen or so that get mentioned in the first breath. When it comes to film noir, The Asphalt Jungle is one of those films. It is close to a perfect film, one that hits every note correctly both for film in general and for film noir in particular. Yes, I’m gushing, and I’m revealing at the start how I feel about this film. I don’t really care.

Since this is a film noir, it’s going to deal almost exclusively with criminal behavior, and to perpetrate this behavior, we have a huge collection of bad, bad people. We could start anywhere, but we may as well start at the man who seems to be the amoral center—Dix Handley (Sterling Hayden). Dix is a thug, a man whose job in any caper is to shoot at whatever someone points him at. He has a soft spot for Doll Conovan (Jean Hagen), who has an equal soft spot for the big lug.

Dix gets brought in on a big job knocking over a jeweler by crime mastermind Doc Erwin Riedenschneider (hereafter referred to as “Doc,” and played by Sam Jaffe). Doc’s proposed job will cost about $50,000 for Dix, the driver, and the safe cracker, but will net a cool half million in purloined gems. Fronting the operation is shady lawyer Alonzo “Lon” Emmerich (Louis Calhern), a man who lives bigger than his wallet, in part because of his penchant for spending time with Angela Phinlay (a very young Marilyn Monroe).

Emmerich’s problem is that he’s busted. Spending money on Angela hasn’t helped this, but he holds his entire lifestyle to blame—he’s just too free with the money. This is something he shares in common with Dix, who tends to play the ponies and play them poorly. Regardless, Emmerich’s plan is to fence the gems from the heist himself, and then use the money to skip to Europe, leaving Doc, Dix, and the others holding the proverbial bag.

This is all part and parcel of film noir, of course, which trades both on the idea of the anti-hero as well as the almost certainty of a double-cross somewhere in the mix. The heist runs into problems and guns blaze. People get shot. Emmerich attempts his double-cross. Guns blaze and people get shot.

I like film noir a lot. The more noir I see, the more it becomes one of my favorite genres of film. Part of this is that the plots tend to be intricate enough to warrant watching. Oh, I know going in that people are going to pursue their vices and die for their sins. That’s part and parcel of the genre. I know there’s going to be furtive meetings in shadows, plans formed and sent reeling due to bad luck or greed. I know it’s not going to have a happy ending. But what I also know going in is that the dialogue is going to be interesting and worth listening to. I know that the characters are going to be more than just the sum of their collective sins.

On all of these scores, The Asphalt Jungle is a classic. The dialogue is noteworthy mainly because it isn’t very noteworthy. There aren’t many tremendous lines or quotes to walk away with, but the dialogue here is very real, and spoken always in earnest. The characters, for all of their faults, are believable and I want to pay attention to them.

I tend to get sucked into films with this basic plot over and over again. I can predict the bad ending even as I hope for something good to happen to the poor mugs with the bad luck to be written into a noir.

Eh, I’m rambling. Film noir is an important genre of film and The Asphalt Jungle is one of the purest and best examples of the genre. There’s no real other reason to watch this film. It’s enough that it’s simply great.

Why to watch The Asphalt Jungle: Noir doesn’t get better than this one.
Why not to watch: Nothing good happens to anyone.
Posted by SJHoneywell at 11:56 PM