There’s a particular fascination people have with fashion. It’s a combination of glamour and the idiocy that seems to come with fashion. The only television show I watch regularly is Project Runway despite the fact that I know nothing about color, clothing, fashion, or style. Movies tend to be intrinsically tied with fashion, too. Movies both reflect the trends of their time and set the style for their time. It’s impossible to divorce particular movie scenes and styles from the fashion of those films. So, it only makes sense that there would be a number of movies involving the fashion world. 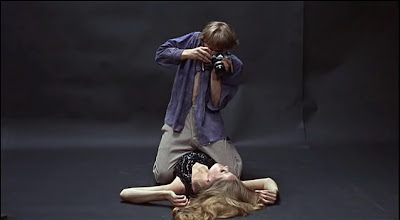 Blow-Up (sometimes just Blowup) is perhaps the first and greatest of films that combine cinematic elements with an eye for fashion and fashion photography. Our main character is Thomas (David Hemmings), a young hip photographer who makes his living doing fashion photography even if his heart really isn’t in it. His real goal is to publish a book of his more serious photography, and he leaves a fashion shoot to find some final shots for his book.

He finds as a subject a couple who are apparently quite in love, or are at least pretty amorous while he’s filming them. Eventually, the woman (Vanessa Redgrave) spots him taking pictures and confronts him, wanting the film and the negatives. He demurs, but she tracks him down, evidently willing to do anything to get that film back. This makes Thomas all the more curious about its contents, and he gives her a different roll of film and makes prints of the shots he took of the woman and her lover.

When he looks closely at the shots, it appears to him that there is something more going on than just a woman and a man standing in a park. In one shot, it appears that a hand holding a gun is sticking out from some trees, and in a final shot, it looks like the man’s body is lying half concealed by the hedge. Now, in addition to some real shots to end his book, Thomas has a mystery on his hands that only he has the keys to.

There’s a lot going on in Blow-Up. In his opening shoot, Thomas shoots the model Veruschka (as herself) in one of the steamiest few minutes ever filmed. Moving on, he shoots a collection of five women in various poses, but quickly becomes bored, setting the plot in motion. This scene will look mildly familiar to you—it’s undoubtedly the inspiration for the photographic career of Austin Powers—the conversation with the models, the shouting, etc.

Thomas as a character is fairly misogynist in that women are merely things for him to photograph and sometimes have sex with. His only non-sexual relationship is with his neighbor’s lover (Sarah Miles), and in one particularly aggressive escapade, he has pretty violent foreplay with a pair of young girls (Jane Birkin and Gillian Hills) who want him to photograph him. (On a similar note, Jane Birkin became infamous as the partner and singing partner of Serge Gainsbourg on Je T’aime Moi Non Plus which featured her simulated orgasm. She’s also the namesake of the Hermes Birkin bag.)

The film is framed by a troupe of mimes, but their meaning can’t be discussed without spoiling the film, which means that I can either stop writing or put a few paragraphs under a spoiler warning. Guess which I’m going to do:

Thomas goes to the park and finds the body of the man and realizes that the woman has probably been complicit in his murder. When he tries to involve anyone else in discovering what happened, though, he gets nowhere. He goes to the park and sees the body himself, but when he goes back to photograph it, the body is gone. Similarly, his studio gets raided and all the negatives and blown up photographs have been removed.

The mimes at the start of the film seem to indicate that we’ll be treading in territory that borders between reality and non-reality, or actual and filmed life. At the end, the troupe performs a mock tennis match that Thomas observes. When the “ball” goes over the fence, Thomas retrieves it for them and mimes tossing it back to them. Once he does, the mock tennis game resumes, but this time with the actual sounds of two people playing tennis.

It’s an odd moment that seems to imply this same sort of divide between reality and image, or truth and illusion. This appears to be confirmed in the final shot of Thomas standing on the field with his camera, slowly fading out and leaving the field empty.

I think this is a film that needs to be watched multiple times to really get. There are a lot of nascent ideas milling around in my brain with this one—the mimes, the connection of the field a the start of the film and again at the end, the seemingly unnecessary presence of The Yardbirds toward the end of the film and the scrum that results from a destroyed guitar. Antonioni packed a lot into this film that requires some thinking and some fermentation.

For all that, Blow-Up is remarkably slow to develop (yes, pun intended). Thomas doesn’t spot the body until about halfway through, and there seem to be some side plots and actions that don’t do much but take up some space. I’m certain that Thomas’s desire to purchase an antique shop and the massive propeller he buys have some specific meaning, but I haven’t ferreted that meaning out yet.

Ultimately, I think I’d like a little less artistic oomph and a little more story earlier on. With repeated viewings, who knows what I’d think?

Why to watch Blow-Up: Sex, drugs, rock and roll, jazz, fashion photography, and possibly murder.
Why not to watch: Despite everything that happens, it’s slow to start.
Posted by SJHoneywell at 11:39 PM