There’s a style of action film that has died out, and been dead and gone for some time. This is the sort of wild action film in which our hero(es) wink and nod at danger, ride straight into the jaws of overwhelming odds and emerge with nary a scratch because, well, they’re the heroes. The classic Western falls along this line, and it’s the sort of thing the Indiana Jones films played with, although Jones always took a hell of a beating (and Jones will come up in a few paragraphs). These “boy’s own” adventure films glorify this type of two-fisted hero, ready and willing to get into a good scrap and avoiding all of the mushy romance stuff. 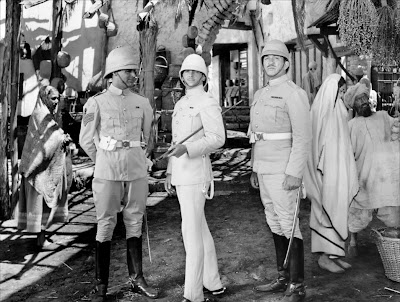 And so we have Gunga Din (pronounced GUN-ga DEEN) from 1939, which might well be the most adventure-y adventure film ever made. Based somewhat on the poem of the same name by Rudyard Kipling, the film (and the poem) walks an uneasy line between racism and its opposite. Gunga Din (Sam Jaffe) wants nothing more than to be a soldier like the three men he admires. But, he is nothing but a water bearer, and a very low man on the military totem pole. The end of the film serves in many ways not as his redemption, but as a sort of upbraiding to those who would consider him a lesser man.

Ah, damn. I get ahead of myself so often.

Despite playing the title role, Jaffe isn’t listed anywhere near the top of the credits. Instead, these places are held by the three men for whom Gunga Din totes water, the trio of two-fisted sergeants: Cutter (Cary Grant), MacChesney (Victor McLaglen) and Ballantine (Douglas Fairbanks Jr.). These three are inseparable, and our initial meeting with them is in a dust up over something that will become a bit of a theme. Cutter is treasure-mad and is sold a bum treasure map. We also soon discover that the three are first-rate soldiers despite their penchant for trouble. Sent to inspect and repair telegraph lines, the three are set upon by Indian natives who prove to be a sort of outlier for a new Thugee sect.

A complication arises in the group when Ballantine announces that his term of service with Her Majesty’s Army has come up and he plans on drumming out of the service and into a marriage and a life as a tea merchant. Cutter and MacChesney quite obviously don’t wish him well and scheme to keep him in the military instead of the cushy civilian life. But all of this is secondary when Cutter hears of a nearby temple actually made of gold. Din leads him to it, only for them to discover that this temple is in fact the central hub of the Thugees. Cutter allows himself to be captured and sends Din back for the others, leading to the climactic scene between the trio and Din, the marching Scottish Lancers, and the Thugee cult headed by their evil guru (Eduardo Ciannelli).

This film is done in the classic Hollywood adventure style. It’s evident from the very beginning that nothing too terrible, or at least nothing fatal is going to happen to our three main characters. They’re too likeable, too willing to step gladly into danger, and too sold on service to Her Majesty for any wound to be much more than something that requires laying about without a shirt. The reaction of Cutter and MacChesney to Ballantine’s proposed nuptials is less about his abandoning them for civilian life and much more about Ballantine subjecting himself to all of that mushy girl stuff. This is not a film made with the female viewer in mind. Instead, it’s a sort of non-serialized version of a cliffhanger serial made for the Saturday afternoon crowd of rowdy pre-teen boys who just sat through a newsreel and a couple of Popeye cartoons. Our heroes commonly handle their problems by punching them in the jaw, and most of the problems can be handled with a single punch for each. There’s no situation so dire that the three men can’t take a minute to poke fun at each other, pull pranks, or argue about what they’ll do when they get out of yet another impossible scrape. Evidently, they’re pretty confident that they won’t die, too.

I mentioned Indiana Jones at the beginning of this, and there’s a reason for it. A great deal of what appears in this film also appears in Indiana Jones and the Temple of Doom. In both films, we see a renewed and reborn sect of Thugee attempting to take over India in the name of Kali. In both, we have a mad guru wildly killing all who oppose him in terrible rituals, and in both, that guru is bald and speaks in flawless English. There’s a vibe here that feels like the second Indiana Jones film. I realize Gunga Din came first by multiple decades, but there’s no getting past the fact that the majority of film viewers these days are more familiar with Henry Jones and Short Round than with our trio of sergeants and the Indian water bearer.

And so the racism needs to be addressed as well—the racism not of the characters but of the film. Ballantine interacts little with Din. Cutter likes the man and tends to praise him. MacChesney tends to deride the little water carrier. This is part and parcel of the characters, though—three different relationships with the title character. The film itself, though, was made in a time when anyone who wasn’t white was either a lesser man or a man who aspired to whiteness. Din’s only wish is to be a British soldier; he has no real aspirations beyond imitating the three men he follows around.

This is most evident in the scene in which Cutter and Din find the Thugee cult. While Din’s eyes go wide at the sight of the terrible ceremony taking place before him, Cutter’s jaw becomes set and he fills with resolve. He is the one who allows himself to be captured while Din runs away—yes, he runs under orders, but run he does. That the film manages to redeem itself (and not Din because he truly needs no redemption) is actually laudable. But the evidence of that wanna-be-white-guy syndrome certainly creeps in.

Is it good? Yeah, it is. Films like this don’t get made anymore, but they used to be Hollywood stock in trade. An entire generation grew up on films like this and a generation of little boys learned (perhaps the wrong way) what being a man was all about from watching guys like Douglas Fairbanks Jr. and Cary Grant punch people in the jaw. Sometimes that’s enough.

Why to watch Gunga Din: Rollicking adventure-y goodness.
Why not to watch: For the most part, danger is met not with serious action, but a wink and a nod.
Posted by SJHoneywell at 11:48 PM