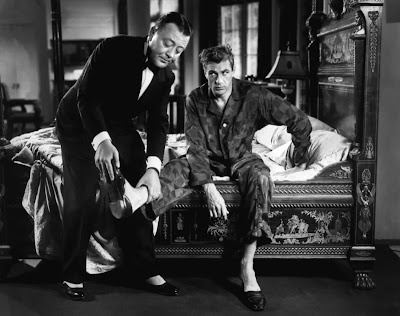 You can see a Frank Capra ending the minute the film starts. That’s the way of Frank Capra movies. He made the same movie over and over, changing a few things here and there—names, places—but at their core, Capra had one story. The story he tells in Mr. Deeds Goes to Town is essentially the same story he tells in Mr. Smith Goes to Washington and It’s a Wonderful Life and many of his other films.

It helps that it’s a good story. Mr. Deeds Goes to Town is the tale of a good-hearted, naïve man suddenly gifted with great power and afflicted by great trials, the template for Capra’s later film Mr. Smith Goes to Washington. The characters here serve as templates for that one—the naïve, the hard-hearted woman, the hangers-on, the people who wish to exploit the naïve for criminal (or political) gain, etc.

But I’ve jumped ahead, haven’t I? Someday I’ll learn.

Longfellow Deeds (Gary Cooper) inherits $20 million upon the death of his uncle, making him suddenly one of the richest men in the country (and remember, this is during the Great Depression). He moves to New York where he meets nothing but conniving people intent on separating him from as much of his fortune as they can.

The first of these is Mr. Cedar (Douglass Dumbrille), his uncle’s lawyer. Cedar wants power of attorney over the fortune, because he’s got a $500,000 hole in his own books to cover. Also on the trail of Deeds is Louise “Babe” Bennett (Jean Arthur), a crack newspaper reporter bent on getting as much of a story from Deeds as she can in exchange for a raise and a month’s paid vacation.

Babe discovers that Deeds has a thing for damsels in distress, so she fakes being in need and is quickly scooped up by Deeds. As he tries to cheer her up (he is a nice guy and a naïve, after all), he gets in a couple of fist fights with some drunken authors who want to make fun of him, and then goes on his own drunken bender. All of this is grist for Babe’s mill, who quickly dubs him The Cinderella Man, making him the laughing stock of New York despite his extremely deep pockets. In fact, he has only two friends, Babe and Cobb (Lionel Stander), and Babe really isn’t his friend.

Eventually, Deeds wises up and realizes that everyone is out to get him, and that the money is at the heart of the problem. Confronted by a destitute farmer, Deeds concocts a plan to use his fortune to buy a huge parcel of land and divvy it out to men who need it, allowing them to farm the land themselves, thus becoming productive members of society. Other relatives of the dead uncle, snubbed benefactors, and Cedar react badly to this and try to have Deeds committed, because anyone willing to give up that much money must be crazy. Of course, by this time, Babe has come around. This all leads to the big courtroom scene at the end, a scene that takes the final act, and essentially the last quarter of the film.

Like I said at the start, there’s no mystery to this film except for those who have never seen a classic Hollywood film or are very young and naïve themselves. Mr. Deeds Goes to Town doesn’t have a single surprise for anyone with any sort of movie watching history. I say this not as a criticism of the film, but merely as a fact to be stated—where this film is going to end up is pretty obvious from the start.

And that’s okay. In a world filled with anti-heroes and people I don’t enjoy spending a couple of minutes watching, let alone a couple of hours, seeing a genuinely nice guy on the screen is pretty refreshing. Okay, Deeds is sort of a ridiculous ideal and has just enough quirkiness to make him a movie character, but it’s all to the good here. It’s a sweet film, heartfelt and cute. Deeds is a nice enough guy, and Cooper plays him well. He’d be a fun guy to go have a beer with.

A story like this naturally gets remade time and time again. The two most recent examples that I know of are The Hudsucker Proxy and Mr. Deeds, which was a pretty straight remake. I really like Hudsucker, in part because of the actors in it and in part because it’s a Coen vehicle. It’s a smart remake, but it really is a remake in almost every way, up to and including the hard-bitten female reporter who once won the Pulitzer. As for Mr. Deeds, it’s best handled in a spoiler:

In the Capra original, Deeds takes the money he has inherited and helps out a few thousand people who really need the help. It’s a ridiculous gesture, but heartwarming and sweet. Sure, it smacks of classic Hollywood sap, but it plays nicely on the screen, even if the courtroom scene gets ridiculous with everyone laughing at everything Deeds says. By contrast, in the Adam Sandler remake, he allows someone else to take over the company he inherits, walks away with a cool billion, and buys everyone in his old home town a Corvette. Instead of the milk of human kindness, we get greed and conspicuous consumption. It’s proof that somewhere along the way, a large part of the movie industry stopped trying to pretend it had a soul.

In what should generally be a theme for anyone serious about movies, it’s always a good idea to stick with the original. It’s sappy and ends up being essentially as naïve and Deeds himself, but sometimes it’s okay to end watching a film with a little smile and a little faith in humanity.

Why to watch Mr. Deeds Goes to Town: It’s a heartwarming tale from the Golden Age of Hollywood.
Why not to watch: The ending is visible from 100 miles off.
Posted by SJHoneywell at 10:41 PM