The End of Griffith

Film: Orphans of the Storm
Format: Streaming video from NetFlix on laptop. 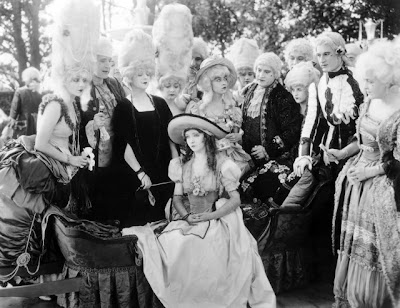 Since I started getting into the silents with intent a few weeks ago, D.W. Griffith has been something of my nemesis. While innovative and important in the annals of film, there’s something about his films that’s sort of like biting down on a piece of tinfoil. When the film doesn’t involve outright racism, it tends to involve insane amounts of melodrama and thick-headedness. So it’s with some relish that I sat down with the fifth and final Griffith film--Orphans of the Storm. If nothing else, this painful chapter of my life will be behind me and I can move on to directors who may be less important in terms of cinematic language but are far more enjoyable to watch.

True to form, Orphans of the Storm contains all of the typical tropes I have come to expect from D.W. Griffith. It seems that his favorite emotion is outrage just as his favorite leading lady is the irrepressibly cute Lillian Gish. While Griffith avoids the racism that seems inherent in so many of his stories with this one, he can’t stop his politics from coming through and dominating every aspect of this story.

As with the bulk of Intolerance, this film is a costume drama, this time set in the years prior to and during the French Revolution and the Reign of Terror. A man in Paris goes to lay his daughter Henriette at the door of Notre Dame since he can no longer afford to feed her. Instead, he finds another foundling and brings her home. This is Louise, who is adopted into the family in no small part because of the money she is found with.

The two grow up and lose their parents to a plague. This same plague renders Louise (Dorothy Gish) blind. Henriette (Lillian Gish) vows to care for her. The two journey to Paris with the hope of a cure for Louise, who must be persuaded to go by a promise from Henriette that she will not leave her or marry until a cure is discovered for Louise’s blindness.

Along the way, they encounter the decadent aristocrat, the Marquis de Praille (Morgan Wallace). He gets a look at the sexy Herniette and demands that his manservant capture her and bring her back to a party. He does so, abandoning the poor Louise to her fate where she is picked up by a group of tramps who use her blindness to garner more money from passersby.

In the meanwhile, Henriette is rescued by Chevalier de Vaudrey (Joseph Schildkraut), a kindhearted noble who frequently takes pity on the poor and acts as a friend to those in need. The two quickly fall for each other, but Henriette has made her promise, and now Louise is missing.

All of this gets tied up into the French Revolution. Old grudges against the nobility come back to haunt everyone. Henriette and Louise find each other, lose each other, and find each other again. De Vaudrey is arrested simply for being a nobleman, and Henriette is arrested with him; both are sentenced to pay a visit to Madame Guillotine, sentenced by the wicked Jacques Forget-Not (Leslie King) with the approval of the equally wicked Robespierre (Sidney Herbert). Only the oratory skills of Danton (Monte Blue) and some mechanical problems with the guillotine can save everyone now. And what about Louise’s eyesight?

This is high melodrama at its silent finest, and it plays fast and loose with history, ideas of justice and nobility, and simple fact. Danton, Robespierre, and Louis XVI are depicted as old, weathered men when not a one of them lived past 40 in real life. It’s also quite interesting to see Robespierre considered a Bolshevik.

I will say this—based on Griffith movies I have already seen, there’s a surprising amount of tension at the end. His movies have both happy and unhappy endings, so there’s some real tension in the moments leading up to Henriette’s walk up the scaffold to the guillotine.

As a costume drama, this works pretty well if only because the costumes and sets are really interesting to look at. It’s interesting to see that Griffith manages to hit his anti-Bolshevik stride by commenting that real freedom wouldn’t come to France until after Robespierre was himself guillotined, glossing over the fact that his savior character Danton was guillotined on Robespierre’s order first. Ah, Hollywood—is there no history that you can’t screw with to get the desired ending and message?

So where does it rank in terms of Griffith? It’s certainly more watchable than Birth of a Nation, Intolerance, and Way Down East. It spins in the same circle as Broken Blossoms. It’s far less racism-driven, but it’s also far more overblown.

Why to watch Orphans of the Storm: All the joys of the Reign of Terror.
Why not to watch: For all its pomp and bombast…it’s still Griffith.
Posted by SJHoneywell at 11:57 PM

Email ThisBlogThis!Share to TwitterShare to FacebookShare to Pinterest
Labels: D.W. Griffith, drama, Orphans of the Storm