Children of Marx and Coca Cola 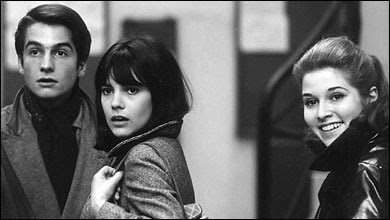 I’ve been on a minor Godard kick lately, Masculin Feminin (Masculine-Feminine) being the third (I think) in the last month or so that I’ve watched. There’s still more Godard to go on the giant countdown, but I think I’m done with him for a bit. The simple reason is that I found nothing in this film to recommend it and nothing to get worked up about. I had almost no reaction to this film at all—not even bewilderment.

The film is unquestionably some sort of statement about youth and youth culture. Our two main characters are Paul (Jean-Pierre Leaud) and Madeleine (Chantal Goya), who become kind of a couple. Paul is intensely political, asking people about their beliefs on things like socialism, the American dream, the birth control pill, and wars going on in the world. Madeleine is a flighty, up-and-coming pop star who doesn’t have a single thought in her head.

And really, that’s it. Paul interviews people about things. Madeleine sometimes sings. They talk more. Then the film ends. Godard also jams in some intertitles containing pithy sayings that are accompanied with blaring music. These are as precisely disconcerting and surprising as Godard no doubt wanted.

When I suggest that this is it, I’m not really exaggerating. There’s a lot of talking going on here, and nothing actually happening. Paul seems to dislike everything he comes across, hating existence for essentially being bourgeois. Madeleine seems to drift from place to place in a world that has been designed to make her feel vaguely content without really feeling anything all that strongly.

Fellow 1001 blogger Squish Lessard uses the term “Eurotrash” every now and again in some of his reviews, particularly on films like this one that seem to come with a particular sensibility. The idea of Eurotrash is almost the polar opposite of the term “white trash.” Where white trash means poor and un- or undereducated, Eurotrash is old money-wealthy, pompous, and entitled. Both of our main characters are made up of different amounts of these qualities. Paul is disaffected by everything, but carries with him a sense of entitlement and supreme arrogance, like the world should be the way he wants simply because he wants it that way. For her part, Madeleine seems to live that same idea without really knowing or caring that she does it.

When I was in college working on my Bachelor’s degree, my campus had a collection of Marxists. These campus radicals protested everything they could think of and a few more things besides. Not an event happened on campus that could happen without someone from the Marxist group(s) getting bent out of shape about it. They yelled and hollered and raised a stink whenever they could. What they didn’t seem to do was go to class or graduate. For all I know, they may still be here. The irony of this is that several of them (and I’m in no manner joking) lived off trust funds and Daddy’s gold card. I can only hope that eventually Daddy got wise and stopped paying after yet another “I’m out of money, you fascist bastard!” conversations.

This, in a nutshell, is how I see Paul. He’s entitled because he can be, and extreme because he lives in a place that allows for and even encourages such extremism. Medeleine is extreme in the opposite direction, being completely unable to care or even to think much about anything going on in the world or directly in front of her face.

At one point, Godard calls his two characters (and the entire youth movement by proxy) “children of Marx and Coca Cola.” In many wyas, this intertitle is the best and most incisive part of the film. These are characters (Paul, at least) who know Marx because Marx is a name to know, not because they learned from him. Paul is a radical because he can be, spouting Marx and creating graffiti because it’s what someone his age is supposed to do. Madeleine simply waits for pop culture to be fed to her.

This may be exactly what Godard was going for with this film. It’s almost an expose on the extreme shallowness that exists beneath that Eurotrashy veneer. If this actually is the case and not merely my own sad ramblings, I applaud Godard for creating this film in the manner he did.

But I still don’t have to like it. And I don’t. This film is completely dull. Nothing much happens in a way that affects much of anything. People talk; others listen, and enough of these are infected by the talk to become the next set of agitators. Roll credits. Bluntly, this film is about as exciting as dish water. I have not been so bored watching a movie for at least six months, and probably closer to a year. Masculin Feminin tries for something and fails miserably. So how much should it be rewarded? Does dull with a message trump shallow eye candy?

Not today. And so I think I’m done with Godard for a bit.

Why to watch Masculine Feminin: It raises some interesting questions.
Why not to watch: It does so in increasingly dull ways.
Posted by SJHoneywell at 11:58 PM