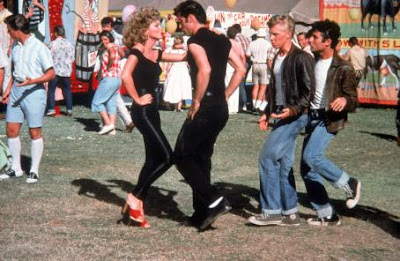 Certain movies become institutions almost from the moment they are released. Grease is one such movie; it became iconic the instant it was filmed and released to the general public. Since 1978, Grease has been the word. Yeah, I know. That’s pretty sappy, but it’s also really true. There hasn’t been a high school swing choir or glee club that hasn’t bumped into a song from this musical at least once every five years.

To put it as briefly as possible, Grease is the story of Danny (John Travolta) and Sandy (Olivia Newton-John). Our two high school students meet at the beach over the summer and have a little harmless fling before it’s time to go back to school—Danny to Rydell High and Sandy back to Australia. However, as it turns out, Sandy’s family plans change and she winds up at Rydell, too.

Danny brags to his friends, a group of greasers who call themselves the T-Birds about his summer escapades. Sandy falls in with a group of tough girls who go by the Pink Ladies. The toughest of these girls is Rizzo (Stockard Channing), who takes an immediate dislike to the goody-goody Sandy. Danny rejects Sandy when they finally meet. Sandy tries to take up with another guy, but it doesn’t work out. The two dance (actually and figuratively) around each other until it all ends exactly the way you know it will.

Of course, there’s a lot more to it than this. Rizzo believes herself knocked up by T-Bird Kenickie (Jeff Conaway). There’s a rival gang called The Scorpions from a rival high school who give a lot of crap to the T-Birds, giving us an additional level of conflict in the film which culminates in a race at an old viaduct. There’s also a high school dance-off. Oh, and there’s a shit-ton of singing.

What surprises me more than anything about this film is how it managed to come away with a PG rating considering the amount of sex in it. There’s a load of sexual innuendo throughout this film, not the least being the back seat sex between Rizzo and Kenickie that includes a broken condom.

This film was the choice of my 12-year-old daughter, and I’m hard-pressed to fault her for it. What I found most amusing, though, was that my 8-year-old daughter managed to sing along with a few of the songs thanks to Glee. Was this appropriate for an 8-year-old? Probably not, but it certainly seemed like a lot of it went directly over her head. And, y’know, PG rating and all. My wife saw it at 9, and she turned out fine.

Grease is a pretty silly musical. It’s a little more sexually sophisticated than the classic MGM musicals of the early years of film, but it was made for a more sexually open time. The girls appeared to enjoy the hell out of it, and it was a nice bit of nostalgia for my wife as well.

For me, I’d rather watch the original version of Hairspray if I want my fill of high school angst and happy endings. It could be worse, right? The girls could have chosen one of the versions of High School Musical, which would have been painful.

If I really think about it, there are things to like in Grease, even for someone as completely ambivalent to musicals as I am. The appearance by Frankie Avalon as a guardian angel is pretty damn funny. Some of the songs are good in spite of themselves, and it’s impossible not to be impressed with the dancing.

Grease isn’t a movie I’d choose to watch very often, but that’s my own prejudice against musicals in general. It’s pretty harmless, after all.

Why to watch Grease: The quintessential American musical.
Why not to watch: High School Musical, the early years.
Posted by SJHoneywell at 11:16 PM