We live in a world of plenty. I live in a community that makes at least part of its income through farming. Despite the fact that it looks fairly suburban and despite the fact that there is a large Midwestern university within a couple of miles of my house, there is corn or soybeans within 15 minutes of my house in literally every direction. This begs the question of why so many people go hungry not just in the world but in the U.S. 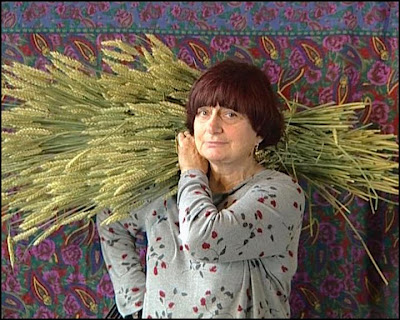 Les Glaneures et la Glaneuse (The Gleaners and I) explores the history and phenomenon of gleaning, or going through the fields of produce after the farm machinery and farmers have taken their yield. This film follows a number of gleaners—those who glean from necessity and those who glean because they enjoy it. Additionally, the film shows a collection of people who glean in urban environments.

This privation and necessity of gleaning is juxtaposed with the tremendous waste that occurs in farming. Filmmaker Agnes Varda talks to potato farmers who deliberately throw away a portion of their harvest every year because the potatoes are misshapen, or damaged or shockingly too large for the size that supermarkets want to sell. These extra potatoes, tones of them, are dumped in fields and left to rot, and so the poor and hungry pick among them for food.

We also see vineyards in Burgundy. Here, for a wine to be considered vintage, only a certain number of bottles can come from each plot. The extra grapes, rather than being picked and sold or gleaned, are destroyed.

Not everyone in the film gleans from necessity. A chef—the youngest in history to earn two stars in the Michelin Guide, gleans herbs and apples on a hillside. Partly, he says, it is to save money. Without gleaning, he would spend $30 per day on savory alone. He also gleans because it gives him control over the produce he includes in the meals he cooks. Through gleaning, he is able to determine for himself the freshness of his foods and regulate the quality of his meals.

Among the more interesting characters we meet are a few artists who glean materials for their projects and one man who admits to having both a job and a social security number, but gleans 100% of his meals from dumpsters because he objects to the tremendous waste he sees in the streets. Too much food gets thrown away, he claims, and the waste is will destroy everything. He also claims that since he started gleaning all of his food from trash receptacles, he has not been sick. Another man who has a Master’s degree and now sells newspapers and magazines, gleans day-old bread from bakeries in the morning and fruits and vegetables from markets in the afternoon.

Next to all of this, the people who pick potatoes in fields and those who pull together pieces of refuse to make art, Varda experiments with her own relationship with gleaning as well as her own mortality. As she wanders through fields, she grabs potatoes for herself and arranges for a local foodbank to come and gather potatoes to feed those who need feeding. She wanders through an orchard of fig trees, eating overripe figs that were left on the trees because they had ripened past the point at which they could be candied.

In her own way, Varda also gleans her film both in the sense of picking up pieces that she sees and likes and takes with her, as well as in the more modern sense of the word. At the same time, the more she films and the more she sees, the more she understands this activity and the various reasons the people she meets have for gleaning. Similarly, as a viewer, we glean in the same way, understanding the behavior that at first seems so strange and foreign. In terms of objects taken home, she admits to a pair of chairs found discarded on the street. She also takes a clock without hands since she feels attuned to it—without hands, it no longer shows advancing time.

Les Glaneures et la Glaneuse is a film of surprising power and beauty. In showing the various attitudes and styles of gleaning, Varda has created a film that speaks to almost all segments of the population. We see those who prevent gleaning of their otherwise wasted crop as a form of protection for themselves. We see other farmers who allow the gleaning, saying that if their own pickers left the fruit, it would simply go to waste anyway. And through it all, there is the constant metaphor of gleaning as something we all do, picking pieces of experiences to remember, taking small parts of others along with us on our own journey.

This is a special film. Who would have known that a film that opens with people digging through dirt piles for potatoes would have such a particular magic and majesty?

Why to watch Les Glaneures et la Glaneuse: A surprisingly beautiful look at food and poverty, art and life.
Why not to watch: It’s a film about potatoes and junked furniture
Posted by SJHoneywell at 11:23 PM

Email ThisBlogThis!Share to TwitterShare to FacebookShare to Pinterest
Labels: Agnes Varda, documentary, Glaneures at la Glaneuse, The Gleaners and I