Ultimately, It's Kind of "Have Not"

Film: To Have and Have Not
Format: Streaming video from NetFlix on laptop.

There are a few things that tend to make me look favorably on a film. I tend, for instance, to like almost all film noir regardless of quality, and the nastier the better. I tend to like everything that stars Humphrey Bogart, too. I’m a sucker for exotic locations, even when they are depicted in black and white. I dig films that have the balls to have a character named Frenchy. More than anything, I always fall for great dialogue, which is one of the reasons I tend to love film noir. 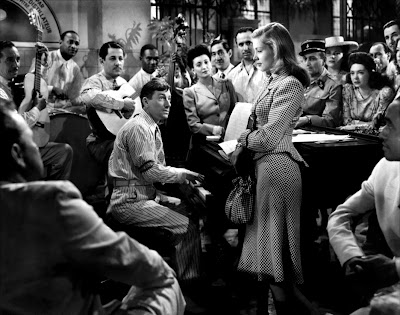 To Have and Have Not isn’t really film noir, although it does have some relation to the genre. It’s a tangential war drama in that it takes place around World War II just after the fall of France. While not specifically film noir, it does have all of the other elements I fall for. It takes place in Martinique, stars Bogart, has marvelous dialogue, and even has a hotel manager named Frenchy. In many ways, it’s a poor man’s Casablanca. It even has an evil fat guy and a singing piano player in this case played by Hoagy Carmichael.

Harry Morgan (Bogart, and not the guy who played Colonel Potter on M*A*S*H) has a boat for hire on Martinique which he runs with his often-drunk assistant Eddie (Walter Brennan), who likes to ask people if they’ve ever been bitten by a dead bee. Their current client is an American named Johnson (Walter Sande) who has lousy luck reeling in fish. After a little more than two weeks on Morgan’s boat, Johnson is ready to call it quits, and he tells Morgan he’ll pay him the $800 or so he owes him in the morning.

Enter Marie (Lauren Bacall), an American who appears to live through looks, charm, and pick pocketing. She lifts Johnson’s wallet and Morgan catches her at it. He confronts her, and Morgan tries to get Johnson to sign over some travelers checks, since it appears that he was going to skip the island without paying. In the meantime, Morgan is asked by his hotel manager Frenchy (Marcel Dalio) to meet with some French Resistance looking to smuggle people to fight the Nazis. Morgan refuses. The Vichy government of Martinique catches wind of the Resistance and a shootout occurs at the hotel, leaving Johnson with a bullet in his chest and Morgan broke, which means that he’ll have to take that job smuggling Resistance fighters.

Marie and Harry circle around each other like sharks, or perhaps cats in heat. They even come up with nicknames for each other; she calls him Steve, presumably because he works on a ship even though he isn’t a stevedore while he calls her Slim, an nickname that is immediately picked up on by the hotel piano player, Cricket (Carmichael). Eventually, Harry brings in the husband and wife Resistance team of Paul and Hellene du Bursac (Walter Szurovy and Dolores Moran) and incurs the wrath of tubby Vichy police guy Captain Renard (Dan Seymour), whose name is just a few letters off the Claude Raines police chief in Casablanca (Renault, if you’re playing along at home).

That similarity highlights the similarities of these two movies. Both take place in an area currently under control by Vichy France, both involve moving Resistance fighters through this troubled area using the assistance of an American expatriate. Both make frequent use of the piano player both as mood music and as minor plot point. The problem for To Have and Have Not is that Casablanca is the superior film in every respect.

Here’s what I mean. Bogart is Bogart, certainly, but here he’s much more mercenary than Rick is in Casablanca. There, the Bogart character is all about doing what he can for the French Resistance and damn the cost. That film also has the interesting love triangle, and there is no such triangle here. Oh, Slim might think there is, and she reacts to Hellene du Bursac as if they were rivals, but they really aren’t. Hellene is too obviously in love with her husband to even think about straying. I may really like Hoagy Carmichael, but he’s no Dooley Wilson, and Walter Sande isn’t anything like a replacement for the great Peter Lorre. In Casablanca we have the aforementioned Claude Raines as the smarmy but likeable cop; the closest character here is probably Frenchy, who is really without much in the way of personality. In terms of plus-sized villains, Sydney Greenstreet has both menace and class while Dan Seymour has a beret and a voice that grates on me like nails on a chalkboard.

I don’t want to give the impression that I didn’t like this movie, because I did. I generally like Walter Brennan and I almost always enjoy any movie that contains Humphrey Bogart. It’s just that the comparison with Casablanca is so natural here, and this film simply can’t measure up to one of the greatest screen romances ever created.

On the one hand, I liked this movie because it's hard not to like. On the other hand, Casablanca is far superior in every way.

Email ThisBlogThis!Share to TwitterShare to FacebookShare to Pinterest
Labels: drama, Howard Hawks, To Have and Have Not