We're Gonna Get You 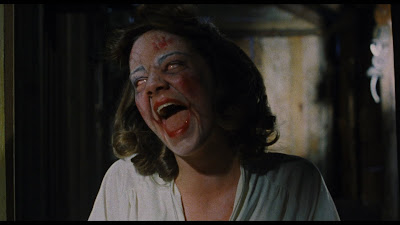 Sometimes I am forced to watch a movie before I am prepared to see it. I’ve been really trying to concentrate as much as possible on films that I haven’t seen before for the last several months, and while there are a few exceptions here, most of the films I’ve watched for this blog this year were new to me. However, as a member of the 1001 Must See Movies Blog Club, the weekly assigned reviews plan out some of my viewing. The Evil Dead is coming up, so I figured I’d knock it out now rather than wait. It’s the same reason I watched Citizen Kane last week.

When I first looked through the Tome of Knowledge, I was mildly surprised and disappointed that The Evil Dead made the list while Evil Dead 2 did not. The sequel is in many ways the superior film. Buoyed by the surprise success of the first film and with a better and larger budget, the sequel has better effects, more effects, and more gore. It’s also far less a horror film and much more a parody. Sure, there are scares a-plenty, but it’s an homage to Moe, Larry, and Curly, and it’s campy as all hell. “Why,” I thought, “couldn’t the compilers of the book see that it was a better film?”

Having just rewatched The Evil Dead, I get it. Evil Dead 2 is a better film, but it’s not as important to the genre. Our original film set an interesting standard for low budget horror. It shows that a really good idea, creativity, and invention is all that’s needed to make a groundbreaking, entertaining film. Raimi, because he had to cobble things together and work with inventiveness instead of money, did some truly innovative work.

The story is simple. A group of five people, two guys and three girls, rents a cabin in the woods of Tennessee. While there, they discover a few artifacts from the previous inhabitants of the cabin, an archaeology professor and his wife. Specifically, they find a terrible book “bound in human skin and inked in human blood” as well as a tape recording of the professor talking about the book. They listen to the tape, which contains the incantations to bring terrible spirits into the world and allow them to possess the living. And so the quintet is attacked by the spirits, get possessed, and kill each other off for about an hour before the film ends. That’s really it.

The Evil Dead is, by definition, amateur film, but it’s never amateurish. Like many truly great independent visions of beginning filmmakers, it was made with whatever money Raimi and his cohorts could beg, borrow, or steal. High-interest loans, investments from local dentists, and cutting corners created this film.

Where the film really shines is both in Raimi’s imaginative playing with horror tropes and in his incredibly inventive use of the camera. Our opening shot, for instance, comes from the perspective of whatever it is that lurks in the woods. It skims low over the ground, tipping and swaying. Evidently, this was done by strapping the camera to a 2x4 and running with it through the woods. It’s a great shot, and such a low budget, creative way to do it.

Our five unhappy campers consist of two couples: Ash (Bruce Campbell) and Linda (Betsy Baker) and Scotty (Richard DeManincor) and Shelly (Theresa Tilly) as well as Ash’s sister Cheryl (Ellen Sandweiss). Cheryl is the focus of most of the weirdness initially. She gets a few flashes of things to come, but it’s not until the incantations are recited from the tape that we get full-on weird. Things really switch into high when Cheryl wanders out into the woods and is attacked. She’s not attacked by a creature, but by the woods themselves in one of the most brutal and unpleasant rape sequences ever filmed.

Another example of the inventiveness here is Cheryl’s possession. While Shelly and Linda test Linda’s ESP with a deck of cards (Linda fails horribly, but Shelly pretends that she’s guessing cards correctly), it is Cheryl who starts guessing the cards correctly in an increasingly disturbed and disturbing voice. She then turns and has become a vision from hell—makeup that looks like a child applied it to a doll and completely white eyes.

As the film progresses, Shelly becomes possessed, then Linda, then Scotty, leaving poor Ash to battle them all with a found shotgun and a chainsaw. Linda is the most terrible, with her awful makeup and sing-song child’s voice, cooing “We’re gonna get you…” In the process of fighting them off, Ash is covered with more stage blood in varying colors than has ever been dumped on a poor, unfortunate actor before or since (or at least until the sequel).

The effects don’t hold up. They didn’t hold up when they were created thanks to the low budget that went almost entirely to some claymation effects at the end of the film. And so what? The Evil Dead is all about getting as much scare and gore and creeps as possible in a terribly short running time with a cash flow that paid for Karo syrup and non-dairy creamer instead of actual stage blood. And it works. It’s damned effective.

The Evil Dead, if nothing else, exists as a monument to what is possible with some imagination and some real dedication to create something. Thanks to this film, Bruce Campbell has made a career in fun, low budget films and has a huge cult following. Thanks to this film, Sam Raimi has gone on to direct big budget films like the Spider-Man franchise. Oh, and the assistant film editor for this was none other than Joel Coen, who’s had something more than a career in the business as well. Not bad for some guys from Michigan.

Why to watch The Evil Dead: Truly original, low-budget horror and the start of at least three great careers.
Why not to watch: Tree rape.
Posted by SJHoneywell at 12:29 PM