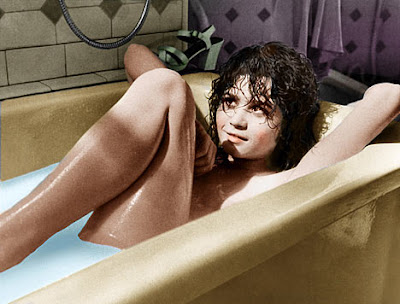 Certain films resonate with people. For instance, say “The Exorcist” to people talking about movies, and you’re guaranteed to get some sort of reaction. Ultimo Tango a Parigi, far better known as Last Tango in Paris is another film of the same stripe. Many people have heard about it and anyone who has seen it has an opinion on it. The main opinion is that it’s filled with the sort of prurient material usually available only in a plain brown wrapper behind the checkout.

You know what? I’m going to make this quick and simple, and I’m not even going to bother with character names. A guy who owns a hotel(Marlon Brando) goes through the trauma of his wife killing herself. Before her body is cold, he seeks out an apartment to rent. While there, he meets a young woman (Maria Schneider) also looking for an apartment for her fiancé and her. The guy rents the place and keeps it as a sort of love shack for him and the young woman, who hook up and have all sorts of increasingly kinky sex until the end of the film. Because he’s looking for some sort of escape, he refuses to talk or allow her to talk about their past lives. Keep in mind that the Brando character is—and I’m not exaggerating here—prowling for sex the same day his wife dies. When he gets back from his initial romp with the girl, one of the maids is cleaning up the blood.

Really, that’s the movie. He deals with the loss of his wife, she deals with commitment issues, and the sex gets weirder and weirder and more and more uncomfortable to watch. And then a huge event happens that changes both of their lives, and the film ends.

I don’t want to sound like a prude here, but this film made me really uncomfortable. It has both everything and nothing to do with the sex. I don’t mind the sex, although I’m not always comfortable with erotica, but sex scenes are just another type of scene. It’s the participants here that make me want to look away.

Specifically, it’s Brando. The problem is that this is not the Brando of A Streetcar Named Desire or On the Waterfront or even Guys and Dolls. This is Brando the same year he made The Godfather. He’s losing what remains of his wispy hair, he’s getting paunchy (although he’s still a few years away from his eventual planetary mass), and he looks a lot like he should be somebody’s father. And the girl is less than half his age. He’s pushing 50 here, while Maria Schneider is about 20.

So, the question to ask yourself before watching this film is, “Do I want to see Brando’s flabby, slacks-covered ass making humpy-humpy motions?”

The scene that everyone talks about is the butter scene. For the uninitiated, allow me to paint a picture. During one of their frequent discussions, the Brando character decides to bring the kitchen into sex by quite literally buttering the girl’s ass and essentially raping her. The scene that so many people find titillating is thus a scene of buttery ass rape; all that’s missing is prison guards. When did unwanted, unlawful penetration with an assist by a condiment become sexy? Did I miss a meeting? If the buttered butt sex wasn’t enough, we later deal with a dead rat and physical abuse that is supposed to pass for sexy and doesn’t, culminating in some of the most abusive speech from Brando while she turns the butter scene back on him without the benefit of the butter. There’s plenty of frontal (and backal) nudity, but even that is sexy for about five seconds and becomes just more to make the film feel dirty.

Any film that deals with such material has to walk a fine line between artistic expression and borderline pornography or at least catering to the prurient interests of the audience. Ultimo Tango a Parigi erases the line and heads so far into the prurient that it becomes a turn off. Even early on, before the sex gets nasty, I have difficult time taking this seriously. Early on, our two characters sit in a post-coital clinch and she asks his name. He responds by saying he doesn’t want a name. He grunts for about 30 seconds and says that he’d rather that be his name. She tells him that her name is a series of ululations. I just can’t take that seriously. A grunt or two might make the intended point and be fairly typical post-coital speech—but this is excessive, as is so much else here.

While the sex is absolutely the thing that everyone concentrates on, there are a couple of plots going on around us here. First, we’ve got to deal with the girl and her fiancé (Jean-Pierre Leaud). He’s trying to make a film that stars her. She’s not sure she wants to marry him—of course she’s not really sure about anything else, either. Additionally, the Brando character needs to deal with the death of his wife and his with his in-laws, who he seems to abuse—particularly his mother-in-law.

Looking back at this film, I see that everything that isn’t disgusting is ridiculous. This is slightly more than two hours of my life I don’t get to have back. At least I don’t have to see it again. This is an ugly film about ugly people, and about as sexy as cardboard. For the first time ever, I've seen a film that takes place in Paris that doesn't make me want to go back to Paris.

Why to watch Ultimo Tango a Parigi: Because everyone tells you it’s filled with sexy-sexy.
Why not to watch: It’s about as sexy as a high colonic.
Posted by SJHoneywell at 4:56 PM