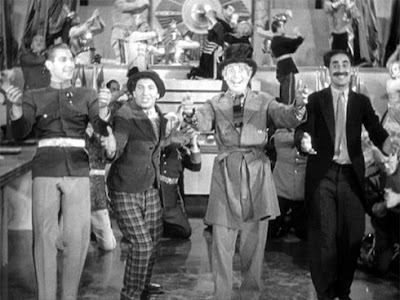 When I was a kid, Duck Soup was on television on New Year’s Eve every year. Until I decided that there were more interesting things to do on the last night of the year, I watched it every year. This probably ended when I was in my early teens, but I still have fond memories of the film. Duck Soup for me was sort of the best exemplar of inspired wackiness. There’s a type of insanity here that doesn’t really appear anywhere else in film, or didn’t until Monty Python showed up.

Watching it now for the first time in what feels like 100 years, I find that I still like Duck Soup almost as much as I did when I was younger. It still feels like inspired insanity. Many scenes happen not because they are integral to the simple plot but because they are screamingly funny, funny being enough. For instance, there is an extended scene in which Chicolini (Chico Marx) and Pinky (Harpo Marx) assault a lemonade vendor (Edgar Kennedy) and play keep away with the man’s hat. It sounds like this would be funny for a minute, but the scene keeps going and remains funny for several minutes, culminating with Pinky setting the man’s hat on fire. This has nothing to do with the plot of the film, but so what? It’s really funny.

Our story takes place in the vaguely European country of Freedonia, which is currently broke. Wealthy Freedonian widow Gloria Teasdale (Margaret Dumont) offers to bail out the government provided the current leader step down and Rufus T. Firefly (Groucho Marx) is moved into the presidency. Meanwhile, the neighboring country of Sylvania is hoping for Freedonia to go belly up so they can take over. Leading this charge is Ambassador Trentino (Louis Calhern), who would like to marry Mrs. Teasdale for her money and to prevent her from using it to save Freedonia.

To assist him in his attempt to destroy the neighboring country, Trentino enlists the support of two spies, the previously mentioned Chicolini and Pinky, who actually do more to create problems than they do to get information. Everything comes to a head when Firefly and Trentino insult each other and war breaks out. Chicolini and Pinky attempt to steal the war plans that are place in safe keeping with Mrs. Teasdale, a huge battle happens, and hilarity ensues. There’s more to the film here, or there could be, because Mussolini banned this film in Italy since he took it personally.

The truth of Duck Soup, and in fact the truth of all Marx Brothers movies is that Groucho, regardless of his name, plays Groucho. Chico plays Chico, Harpo plays Harpo, and Margaret Dumont plays Margaret Dumont. The point of the film is not to watch or care about the plot, but the watch and care about the Marx Brothers being agents of chaos and insanity. The most entertaining (and famous) moment is the mirror scene in which Groucho and Harpo (I think…it might be Chico) mirror each other’s actions.

The person who really gets short shrift in this film is the fourth brother, Zeppo Marx, who plays Firefly’s aide-de-camp. Zeppo was always the straight man for the Marx Brothers, evidenced in no way better than the fact that his character names were always completely vanilla. Where Harpo gets to play a guy named Pinky and Groucho gets the awesome comic moniker of Rufus T. Firefly, Zeppo’s character is named Bob Roland. Kind of sad, really.

Duck Soup isn’t really supposed to make sense, and it doesn’t. It’s inspired insanity, a barely contained chaos of movement, noise, and zinging one-liners. There are a few musical numbers, and these are where the film feels the flattest to me. They contain the same sort of wonderful craziness, but they seem so much more artificial than the rest of the non-musical parts of the movie. They feel more staged somehow, and thus less genuine, and less funny.

Still and all, I have a warm spot for Duck Soup because it contains good memories for me. Despite the musical numbers and a tragically short running time, it still manages to make me laugh legitimately out loud every time I watch it. 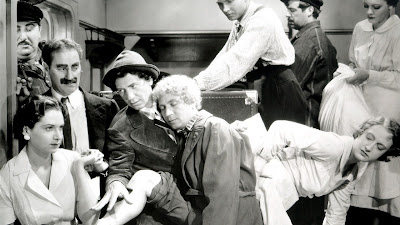 A Night at the Opera is the first Marx Brothers movie after the departure of Zeppo Marx as well as the departure of the Marx Brothers from Paramount. The three remaining brothers wound up at MGM. MGM wanted the Marx Brothers to be a little more family friendly and a little less insane, something that might be a little more marketable for a larger group of people. What this means is that the Marx Brothers lost in edge they picked up in audience and popularity. What this means for us in terms of this film is that in addition to the antics of the brothers, we’ll also get a manufactured love story between Rosa (Kitty Carlisle) and Ricardo (Allan Jones). More seriously to my way of thinking, all three of the brothers are now good guys, meaning they aren’t going to be pitted against each other, which is where most of the comedy in their early films came from.

Regardless, we start in Europe as the manager of the New York Opera, Gottlieb (Sig Ruman), looks to sign a new tenor. The tenor he has his mind on is Lassparri (Walter Woolf King). Lassparri has his mind set on Rosa, but Rosa loves Ricardo even though the talented Ricardo can’t get a break as an operatic tenor. The signing of Lassparri comes thanks to the intervention of yet another wealthy widow played by Margaret Dumont, this time named Mrs. Claypool; regardless, she’s essentially the same character Margaret Dumont always played.

Also working for the opera is Otis B. Driftwood (Groucho), who would like to marry Mrs. Claypool for her money. He’d also like to sign a tenor, and is steered toward Ricardo thanks to the intervention of his erstwhile manager Fiorello (Chico) and wardrobe worker Tomasso (Harpo). Lassparri signs with the opera and leaves, taking Rosa with him (since of course he has designs on her, too). Driftwood inadvertently smuggles Ricardo, Fiorello, and Tomasso on the ship in his steamer trunk, and (naturally) hilarity ensues. The entire plot revolves around getting both Rosa and Ricardo to sing for the opera despite the machinations of Gottlieb and Lassparri.

As with Duck Soup, the entire film hinges far less on the plot and the frankly tepid romance than it does on the comedic bits of the three brothers and the multiple straight men (and straight woman Dumont). The classic bit here is the scene in Driftwood’s stateroom aboard the ship. Little more than a closet, 15 people manage to cram in at one point, since more keep showing up and no one ever leaves. Another involves the police looking for the three ship stowaways in New York, a chaotic scene involving moving furniture, disappearing on the fire escape, and some quick costume changes.

Again, the major recurrent Marx Brothers players here play simply themselves. One of the reasons Margaret Dumont was such a great foil for Groucho Marx is that (evidently) she didn’t really get the jokes, and always played her scenes straight. Groucho is still the master of the quick one-liner and faster retort. Chico can spit out long, rambling nonsense. Harpo…well, Harpo doesn’t talk, but he is in many ways the most entertaining of the bunch.

With the basis of the film being opera, there’s no surprise here that a lot of time is spent on musical numbers. The concluding numbers, or at least the opera that leads to the inevitable ending, are silly and filled with the sort of random events and anarchy that made the Marx Brothers who they were. On the ship, though, there’s an interlude in which Chico plays the piano and Harpo plays the harp. While sweet and fun, there’s not a lot here, other than it gets the three stowaways temporarily caught. It appears more or less to be a scene to allow the two brothers to demonstrate their musical talents.

Why to watch Duck Soup: The last Marx Brothers movie involving all four.
Why not to watch: Too short, and the musical numbers don’t do much for it.

Why to watch A Night at the Opera: Some of the greatest comedy bits ever filmed.
Why not to watch: The Marx Brothers with far less edge than they once had.
Posted by SJHoneywell at 11:43 PM