A Life of Crime 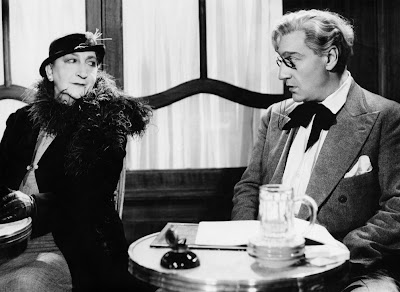 One of the reasons I enjoy this particular journey through film is that there is a real, palpable joy when I find a film that has been eluding me. One such film is Sacha Guitry’s Le Roman d’un Tricheur (The Story of a Cheat). I can’t say that I spent a great deal of time hunting this film down, but that was because this film wasn’t to be found anywhere. And then, the Eclipse imprint of Criterion released a Guitry collection including this film, and evidently the library in Rockford picked it up, because here it is.

The film tells the story in the past tense as a man who has spent his life being picked out to commit crimes by others writes his memoirs. He learns that crime actually pays early on. As a child, he lives in a house with 11 other people. His parents run a store, bringing in a decent yearly income. One day, our hero steals a little money out of the till to buy himself some marbles. He’s caught, and as punishment he is not allowed to eat any of the delicious mushroom dish his mother cooked. However, the mushrooms were poisonous, and everyone else in the family dies.

He is taken in by a relative, who cheats him out of his sizable inheritance. Again, he learns the same lesson—cheaters prosper. While he was punished (and then vindicated) for his small crime, no one thinks to prosecute his relatives for their crime of stealing his money. So, figuring that the money is lost and that he needs to make his own fortune in the world, he goes out to discover the world on his own. He works as a doorman at various establishments, and when he gets older, he discovers that his position has particular fringe benefits of placing him around attractive, wealthy, bored women.

Throughout his life, he attempts to walk the straight path, but is continually taught by fate or whatever hands guide him that cheaters win and acting honestly is ultimately punished. His attempt to break the bank at Monte Carlo, for instance, succeeds, except that it succeeds for everyone but him. He tried to cheat, failed to do so in a way that benefitted him, and loses everything because of it. This pushes him firmly into the realm of a card sharp, an event that really doesn’t happen until close to the end of the film.

He becomes an expert at cheating and at disguising himself to allow him to cheat freely. And then an event occurs that changes everything for him, but teaches him the same lesson over again. A number of coincidences happen that seem guided by the hands of fate, assuming that fate really wants to prove to him that it’s better to be a cheat than it is to be an honest man. And it ends with, essentially, a final joke that evidently the entire film has built up to.

What makes this film interesting is that the old cheat (played by Guitry himself) tells the entire story as the narrator. Any dialogue that happens comes from the voice of the old cheat. In many ways, it plays very much like a silent film that happens to have a legitimate narrator throughout.

Initially, this is sort of charming like much of the film itself. The story itself is sort of fun and often funny, and much of this comes from the narration and the narrator. But more than an hour of listening to the same person over and over, the voice never really changing soon becomes sort of oppressive. I wasn’t able to watch this straight through—I had to take breaks to get away from the voice.

This is a cute film, but somewhat difficult to watch because of the style in which the story is told. It may be that I wasn’t ready for the constant narration and the lack of any real dialogue except in those few parts that occur in the film’s present as the narrator writes his memoirs. I can’t help but think that I might have reacted better to it had the narration been there to guide the story, but not tell the entire story.

Why to watch Le Roman d’un Tricheur: A charming life of crime.
Why not to watch: All voiceover all the time.
Posted by SJHoneywell at 11:54 PM