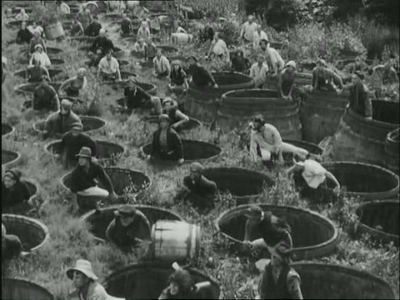 Say what you will about Sergei Eisenstein, he knew which side of the bread the butter was on. When the Bolsheviks took power, Eisenstein began creating films that fed directly into the Soviet propaganda machine, either by extolling the power of the workers, decrying the evils of the Czarists, or both. Stachka (Strike) does a little bit of both, but leans heavily on the side of attacking the bourgeoisie, those capitalist controllers of the means of production who got Karl Marx in such a dither.

Stachka is actually a very simple story. The workers at a capitalist-owned factory in the pre-Bolshevik days are not particularly happy. Things boil over and reach a breaking point when one worker is falsely and unfairly accused of stealing a micrometer, an item that comes with the hefty price tag of 25 rubles. Unable to clear his name or prove his innocence and unwilling to attempt surviving without his job, the worker commits suicide.

This event proves to be the catalyst for a strike. The workers make a series of what would today be considered completely reasonable demands—fair treatment, eight-hour work days (six for minors) and a wage increase. These demands are gone over by the heads of the factory, who in typical silent melodramatic style are the epitome of fat cat industrialists. In fact, some of them have become so wealthy from the sweat of the workers that they are indeed extremely obese. These men sit around in a posh room and puff giant cigars and enjoy delicate treats. Naturally, they come back with the statement that the demands cannot be met—not a single one will be given in on.

Instead of negotiations, the bourgeoisie try to send in their own agitators to return the strikers to work. Finally having had enough, the strikers resist such propaganda efforts and continue the strike. Then, in a move that seems positively modern, Czarist troops arrive and gun down everyone they can find in a scene that quite literally compares the poor slaughtered Proletarians with slaughtered cows.

This is Eisenstein’s first film, and it shows. Certainly Bronenosets Potyemkin was just as filled with propaganda and anti-capitalist moments, so the political ideas evidently took a look time for Eisenstein to outgrow. So while the impact of this film is the same as its later masterpiece, it doesn’t change the fact that his later films are substantially better. This is almost certainly comes from Eisenstein’s overall level of competence and comfort as a filmmaker.

It helps that the story here is a good one, or at least one filled with a lot of dramatic possibility. The shots, while sometimes a bit ham-fisted, show a lot of promise that would be realized in some of Eisenstein’s later work. Here, though, this promise is tarnished by the metaphorical sledgehammer with which Sergei applies his message. The bourgeoisie factory owners are so stereotypically fat cattish that they are almost cartoons who care nothing of the suffering of the poor, oppressed workers. While no doubt true at some level, the depiction here is pretty extreme.

All in all, a good film. If for no other reason, it shows the earliest available Eisenstein work, which shows the rudimentary beginnings of a man who would become an important film pioneer.

Why to watch Stachka: All directors start somewhere, but not all directors are Sergei Eisenstein.
Why not to watch: The premise is far more interesting than the film.
Posted by SJHoneywell at 11:51 PM