Prison movies are sort of their own thing—enough that it’s possible to subdivide them into several sub-genres. Prisoner of war films, for instance, are quite different from films that simply involve people in prison for crimes against the state or humanity. There are films in which the prisoners have been imprisoned for legitimate reasons and those imprisoned for political ones. Some prisoners we are to sympathize with; others we are supposed to despise. 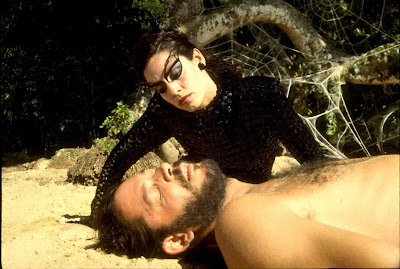 Kiss of the Spider Woman is a prison drama in which we give our sympathies to a pair of prisoners sharing a small cell. The prison is located in an unnamed South or Central American nation; however, since the author of the original book and the director of this film are both Argentinean, and since Argentina was the presumed location of escaping Nazis, and since there are some Nazi references, it’s a safe bet to call this Argentina. Our two prisoners are incarcerated for very different reasons. Luis Molina (William Hurt) is in jail because he corrupted a minor. Molina is very much the 1980s stereotype of a homosexual—flamboyant and effeminate. His cellmate is Valentin Arregui (Raul Julia), who has been thrown in prison for political reasons. The more he talks, the more it sounds like those politics are communist.

Initially, we are led to believe that Molina is frivolous and flighty and that Arregui is deeply committed to his cause, giving up everything for it. Molina keeps himself sane and escapes mentally and emotionally from his imprisonment by reciting the plot of a particular romance film he once saw. It’s quickly evident that the film was created in Germany during World War II and is a Nazi propaganda film. Molina claims not to care despite the Nazi’s depredations against homosexuals because he loves the romance.

While Molina describes the film, we frequently see scenes from it through his eyes. In the film a French singer (played by Sonia Braga) falls for a German officer (Herson Capri). Their romance is, of course, a star-crossed one, but she comes to believe that her lover is actually working for the good of France and the good of the world, and that the resistance fighters are truly the bad guys. It’s noteworthy that throughout, the resistance are portrayed not only as cowardly and subject to base whims, but also Jewish. This film within a film becomes something of a metaphor for the relationship between Molina and Arregui.

How can this be? About halfway through the film, we learn that Molina is actually working for the warden and the state police. His job is to get as much information as he can from Arregui through kindness, bribery, and any other methods he can determine. He uses this position to ask for special food, and then attempts to insinuate himself into the better graces of his cellmate to learn as much as he can about the radical resistance.

However, as he sees the daily torture Arregui goes through (his food is routinely poisoned), Molina slowly starts to fall in love with his cellmate, becoming in a sense the heroine of his propaganda film. While he still wants to get out—dragging vital information from Arregui means parole for him—he also doesn’t want to betray the man he has come to both love and respect.

The title comes from another movie interlude spoken of by Molina—he tells of a beautiful woman (also played by Braga, who plays Arregui’s lover in one quick flashback) trapped by a web of her own making. She rescues a drowning sailor and nurses him back to health, but is also seen crying for some reason that Molina cannot express. It’s evident that Molina is making up this “film” of whole cloth, and it’s just as evident that as with the propaganda film, he sees himself as the woman and Arregui as the man.

Throughout my watching of this film, I was struck by how nicely this story would play not as a film but as a stage play. As it turns out, the story has been turned into a play, which seems very much more the natural environment for a story that essentially involves two men in a small room for most of the running time. This is greatly enhanced by the performance of our two main stars. Hurt inhabits this role almost too perfectly. Julia is almost instantly sympathetic, and despite his outbursts of temper against Molina and his almost painful dedication to his cause, he remains sympathetic throughout.

I don’t necessarily believe where the film eventually goes, but I like the interplay between the two characters as well as the switches between fantasy and reality. If I have a strong objection, it’s in the way the William Hurt character is written. Hurt plays the character beautifully—he did win an Oscar for it, after all—but the character is in many ways a complete stereotype of the effeminate gay man. It’s a bit disappointing, actually to see that stereotype played out once again in a film that really appears to be attempting to play the character far more sympathetically. It could be argued that the stereotype exists for a reason, and almost everyone knows at least one truly flamboyant gay man, but that doesn’t mean I want to see that stereotype reinforced and played out in a film that frankly should know better.

And so, while I find a lot here to recommend, it’s a reserved recommendation. It’s another film I’m happy to have seen, but that I don’t foresee me watching again in the near—or distant—future.

Why to watch Kiss of the Spider Woman: Two performances as good as they come.
Why not to watch: Stereotyping doesn’t need to happen in film.
Posted by SJHoneywell at 11:19 PM