This One is Inevitable 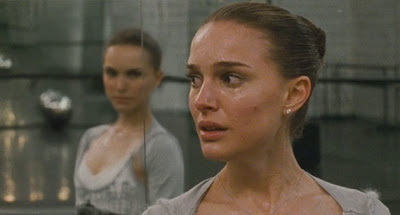 The 8th edition of The Book has been announced for September release, and the released cover is Natalie Portman’s character from Black Swan. So, it’s a given that Black Swan will be one of the dozen or so films added to this latest edition. When I went movie shopping at the closest Disc Replay to my office and saw a copy for an amazing $5, it was equally a given that I would buy it.

The majority of heterosexual males in this world neither know nor care much about the ballet. Yes, that’s a stereotype, but I’m also guessing that it’s at least 95% accurate. If you lined up 100 heterosexual men, at most five could name more than Swan Lake and The Nutcracker as ballets that they have heard of. This makes me unusual, since I can name a few more. In defense of my own heterosexuality, though, it should be stated that my older daughter is a very serious dancer, and has taken ballet for years. She goes to summer camp for it. Hell, I’ve even performed in The Nutcracker to help out her dance company.

So I’m no stranger to ballet dancers or obsession, which is really the entire point of this film. Our dancer in question is Nina Sayers (Portman), who has been a member of her particular dance company for several years. She’s been made promises to be featured more thanks to her skill and dedication. We learn right away that the featured dancer of the company is Beth Macintyre (Winona Ryder), who is retiring at the end of the year, since she is now over 40. It becomes evident eventually that Beth isn’t necessarily going gentle into that good night, and that this retirement is not her idea in particular.

Regardless, the ballet company is going to open the new season with Swan Lake, a ballet in which a princess is turned into a white swan. She will remain a swan until she earns unending fidelity and devotion. The swan is well on her way to exactly that when a black swan, who is the curse-casting magician’s daughter steals the love of the prince from the white swan. Now doomed to remain a swan forever, the white swan kills herself tragically. The company director, Thomas Leroy (Vincent Cassel) plans on doing something new with the ballet this time, and the ballet is looking for a new face.

Nina is tapped to audition for the role, as is another dancer named Veronica (Ksenia Solo). Nina’s audition is interrupted by the arrival of a new dancer named Lily (Mila Kunis), which throws off Nina during her audition as the black swan. The black swan role was already her Achilles heel, since Thomas has decided that she does fragile and vulnerable well, but can’t really act the part of a seducer. The next day, he tells her that he’s given the part to Veronica, but actually gives it to her.

And now the fun begins. Nina starts to hallucinate as the stress of the role begins to wear on her. Much of this hallucination comes in the form of seeing herself as an evil double, much like the black swan is the evil twin of the white swan. It also involves pulling pieces of her skin off various parts of her body. Nina is obsessed with her own perfection, which has made her constantly self-conscious on stage. Thomas tries to get her to open up sexually, figuring that this might help her lose herself in the black swan role. What it seems to do, though, is create more and more moments when reality for Nina isn’t reality for anyone else. Ultimately, she embraces both the role and the persona of the black swan, going so far as to physically attack her mother (Barbara Hershey) to make it to her opening performance.

We also learn that Nina once had a habit of scratching herself badly, not unlike cutting herself. As the film progresses, the scratching gets worse and worse, and happens on her shoulder blades, as if swan wings might be attempting to sprout there—something that does eventually happen in one of her hallucinations. I won’t go past here—this is not a movie to have spoiled.

Once again I find that Aronofsky has created a film that is difficult to enjoy or like, but is incredibly easy to respect. Black Swan explores this concept of madness and obsession to its logical and terrible conclusion. In short, it’s very much like his earlier films Pi, Requiem for a Dream, and The Wrestler. Aronofsky might well be a one-story guy, but he hammers that story better than anyone else. The obsession with and desire for perfection is certainly a well-known idea, and one that anyone who knows a ballet dancer or two has some first-hand knowledge of.

Of course the scene that gets all the motors running here is the lesbian scene between Natalie Portman and Mila Kunis. True to Aronofsky’s idiom, it gets disturbing and horrible pretty quickly.

Many people didn’t like Black Swan, as is evidenced by the fact that I got a virtually new copy for peanuts a couple of weeks ago. I wonder how many dislike it for the overt sexuality and lesbian moment and how many are bothered by…everything else. True to form, I can’t say that this was a film that I really enjoyed watching, but I respect the hell out of it and what Aronofsky does with his films. And for the record, I’m forbidding my ballet dancing daughter from ever watching it.

Why to watch Black Swan: Aronofsky seldom makes bad films.
Why not to watch: Insanity is never pretty, even when it’s beautiful.
Posted by SJHoneywell at 11:56 PM