Luis Bunuel is a director with whom I have trouble. Since a great deal of his output delves fully into the surreal, I often don’t know how to react to it. Do I laugh? Do I take it seriously? I tend to go into his movies like I go into a cold swimming pool. I dip in a toe, inch my way in, and eventually get to the point where I feel acclimated. The problem is that often with Bunuel’s films, I’m just getting acclimated with the environment when the film ends. 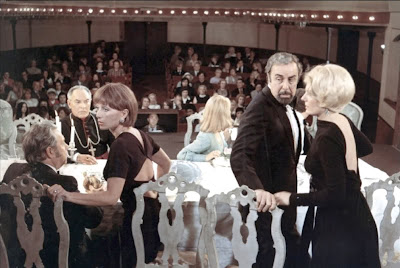 So I was rather pleasantly surprised by Le Charme Discret de la Bourgeoisie (The Discreet Charm of the Bourgeoisie), which certainly goes to the surreal, but is also in many ways easier to read. We are concerned with three couples who are in many ways the epitome of the upper middle/lower upper class. Throughout the film, the three couples attempt to get together for a meal and are snubbed at every turn.

Our first couple is Don Rafael Acosta (Fernando Rey) and Florence (Bulle Ogier). He is the ambassador to France from the mythical country of Miranda, which might be South American or Caribbean. As a diplomat, Acosta uses his position to smuggle in massive amounts of cocaine, which he shares with his friends. One of those friends is M. Thevenot (Paul Frankeur), who is married to Simone (Delphine Seyrig). It’s entirely possible that Simone and Don Rafael are having an affair. They certainly seem to be, at least, but reality is not always that firm in this case.

Our third couple is Henri and Alice Senechal (Jean-Pierre Cassel and Stephane Audran), who initially are the hosts of a failed dinner party. They also host a second failed dinner party when, instead of going down to greet their guests, they sneak off into the garden for sex. Their sudden disappearance causes Acosta and Thevenot to panic, since they believe the police are on the way to arrest them for drug trafficking.

Meals are interrupted by the Army, by police raids, by dead bodies, and more. In short, the six people almost never get to eat, and when they do, it’s only for a few minutes before something terrible happens and disrupts them.

Around the middle of the film, we starting delving into the world of dreams. Frequently, a scene will take a very strange turn, like the characters arriving for a dinner party only to discover that they are in fact on stage and expected to perform a play that none of them have learned the lines to. Just as the scene comes to a head, one of the characters wakes up and the film continues. From this point forward, it is impossible to tell if anything is actually happening or if we are in the dream state. This is because Bunuel never changes away from reality in the dreams. They are played straight, as if they are really happening, and we don’t discover that reality is being twisted until we see someone sit up.

This more than anything is what makes the film work for me. There is no separation between the dream states of the various characters and their waking reality. We can never be sure what we are seeing is real or if it is the figment of someone’s subconscious. For instance, at one meal the couples are arrested. At the police station, we hear the story of a police lieutenant who was killed, but comes back every year on the anniversary of his death to try to get people to like him. He arrives and releases our characters, but this then turns out to be another dream. The police chief is told the release the prisoners and does. But were they ever really arrested in the first place? It’s impossible to tell.

In short, Le Discret Charme de la Bourgeoisie makes it impossible to tell if something is really happening or if it is something else. Because of this, everything has to be taken at face value until it is proven to be something other than reality. This makes the film more than a little farcical, but it’s a farce that really works. Eventually, we question the entire experience—how artificial was everything that we saw? On a very real level, it’s all artificial since these are actors playing roles in a film. It’s impossible to tell where the story ends and begins, where reality ends and begins, and where the roles end and begin.

As a shock, I liked this film, and I didn’t really expect to. It’s silly and strange, but it’s a film that benefits from a sort of laissez faire attitude of just letting the film happen and worrying about interpretation later. Of course, Bunuel never works on a single level, and he’s making a statement about the bourgeoisie class here, too.

There’s also some genuine humor here. At one point, Acosta tells his friends about people at the airport wanting to search his diplomatic bag—a serious breach of etiquette. He mentions that another ambassador was recently arrested for drug trafficking, discovered when his diplomatic bag was searched. Upon conclusion of the story, Acosta reaches into his own diplomatic bag and pulls out a couple of fistfuls of cocaine.

This film is about attitude, perception, and ego, and it really works. Some may find it difficult and others may be offended by what Bunuel seems to be saying about the upwardly mobile, upper middle class. But so what?

Why to watch Le Charme Discret de la Bourgeoisie: Highbrow silliness.
Why not to watch: Up is down, down is up, and it will remind you strangely of Inception.
Posted by SJHoneywell at 11:44 PM