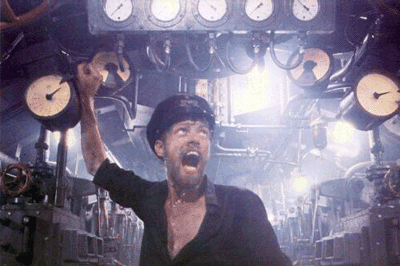 I took German as my foreign language in high school in part because it was the language that nobody took. My high school had three Spanish teachers, two French teachers, and only one German teacher. This is not really important when discussing Das Boot (The Boat), except for the fact that this movie may have been influential in my decision to study German as much as the fact that I figured if I learned how to swear, there would be fewer people who could understand me.

Das Boot is notable if for no other reason than it is the first post-World War II film that is about the war, made in Germany, made by a German filmmaker, and features the German military as the heroes. At first blush, this sounds like the worst possible idea for a film—who would want to watch a glorification of Nazism? Fortunately, that’s not what this film is about. Instead, this is about the crew of the U-96, a U-boat sailing in the Atlantic during the heart of the war.

The most interesting thing about this movie is how easy it is for the viewer to see these German sailors not as Nazis and monsters, but as men fighting for their lives in a situation not of their own making or choosing. We see our submarine crew at the beginning of the film, and they are nothing but boys eager to prove themselves in battle. This quite naturally changes as the film progresses.

As far as ideology goes, the U-96 has only one fervent Nazi on the ship—one man who seems to both believe in and embody the principles of National Socialism is the most hated man on the boat. The only instances of Nazism that appear in this film are derided or treated as something of a joke.

What we see instead is the life of these men as they attempt to run a patrol around the Atlantic Ocean, looking for British shipping to sink, running across destroyers, and surviving seemingly endless depth charge attacks. We see the ship descend below its maximum depth, see the men living in these terribly cramped conditions, sleeping in cots in shifts, sweating, stinking, pushed to and past the brink of sanity. What we genuinely see—and this is the genius of Wolfgang Petersen’s film—is this ship of young men turn into a ship of old men in a few short months at sea.

As we learn more about these men, we discover that they are not the clean, precise machinery of evil that the German military has always been depicted as. These are real men with lives, families, dreams, ambitions, and fears. Many of them are in the Navy not because of their ideology or beliefs, but because the country went to war, and that’s what young men do when their country goes to war. In interviews, Petersen said he wanted to make a film not about Germans, or Americans, or British, but about men, and that is precisely what this film is about. Half an hour in, and despite all instincts to the contrary, the audience wants nothing more than for these men to get home to port safely.

Das Boot is assisted by some tremendous work in front of the camera. The captain of U-96 is played by Jurgen Prochnow. The character is a mere 30-years-old in this film, but he has the face and manner of a much older man, a symptom of spending so much time in battle under tense conditions. For this voyage, his ship takes on a German journalist named Lieutenant Werner (Herbert Gronemeyer), a man who begins the film filled with ideals that slowly turn into little more than survival instinct as the film (and the journey in the death trap of a U-boat) continues. Other notables are the ship’s chief engineer (Klaus Wennemann), a young romantic named Ullman (Martin May), and a veteran seaman named Johann (Erwin Leder).

It’s Johann who tends to elicit a certain amount of sympathy from me. In an early scene, the U-96 is spotted by a British destroyer and dives to get out of the range of depth charges. The bombardment is ferocious and never-ending, and Johann breaks. In this moment, looking into the man’s face is looking in the face of insanity and pain. Johann recovers, and even performs brilliantly after this incident, but in that one moment, the man looks like Death walking through the narrow passages. The fact that Erwin Leder’s face looks almost identical to a skull is just a bonus in this case.

In addition to making this crew a group of real men with real issues, in addition to giving us a group of World War II-era German troops that we want to survive, Petersen also provides us with great moments of film. At one point, the U-96 dives, and the dive plane sticks, sending the ship to the bottom of the Straits of Gibraltar. Bottomed out on a submerged patch of sand at twice the maximum diving depth for the sub, the ship begins to flood. Everything stops working. The men work feverishly simply to survive. In these moments, this film becomes the definition of claustrophobia.

At other times, there is even genuine humor. Meeting a German merchant ship off Spain, the captain and his men are openly contemptuous of the easy lives of these merchant sailors, wearing their own battle experience and toughness on their sleeves. By this time, even the journalist is treated as a member of the crew, having survived the same trials as the rest of the men.

Das Boot is not a film that I’d choose to watch that often, evidenced by the fact that it’s been probably 25 years or more since the last time I saw it. It’s still a damned effective film, though, and it still manages to perform the nearly impossible task of making me want to see the Germans succeed, or at least survive. Don’t feel guilty about that is my recommendation. These guys aren’t Nazis—they’re just men who want to go home.

Why to watch Das Boot: A war film that hits the target it’s shooting for.
Why not to watch: Your only option, really, is to root for the Germans.
Posted by SJHoneywell at 11:25 PM