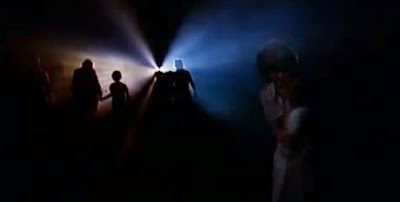 Films that have strong religious content are always interesting from my perspective. With Resurrection, we get something of a poser. There are definite religious implications with this film, but the film refuses to actually take us all the way there. However, it’s impossible not to have religious implications in a film where our primary character is gifted with the ability to heal people with a touch. I’m not exactly sure where this review is going to go because my thoughts are still coalescing on this film, so I’ll be interested to see where we end up.

Edna (Ellen Burstyn) buys her husband a sports car for his birthday. The two of them go out for a joyride. During the drive, a child runs out in front of the car and, while swerving, the two drive right through a fence and over the side of a cliff, smashing on the rocks below. My first thought here was wondering why there was such a flimsy (think white picket) fence as the guard for a massive drop off into the ocean, but that’s neither here nor there. Edna’s husband does not survive the crash, but miraculously(!) Edna does, although she does die on the operating table for a few minutes. During these minutes, she has visions of the afterlife, which include people who have died and lots of lights and fog. Y’know, the traditional stuff.

Edna has survived, but is also now a paraplegic. She returns to the family farm in Kansas and adjusts to her new life, which changes again when she cures the nosebleed of a child at a family function. Believing that she may now have a gift of healing, and spurred on by her grandmother, Pearl (Eva Le Gallienne), Edna begins to try to heal her own legs. Eventually, she’s able to ditch the wheelchair and the braces, and while she walks with a cane for some time, she’s essentially come all the way back.

She also starts gaining a reputation as a healer, which is enhanced when she stops the bleeding from a knife wound suffered by Cal (Sam Shepard) during a bar brawl. Soon enough, Edna is healing people around her with her touch, although not everyone is healed. She claims that not everyone can be—some people need their illnesses and maladies, and those are beyond her help. She and Cal become an item despite Cal’s father deciding that because Edna doesn’t specifically mention the holy spirit when she heals people that her powers actually come from the devil. And then Cal decides that she is the Second Coming, and things start to get a little weird, especially when Edna’s powers begin to be verified by scientific inquiry.

The issue I have with Resurrection is not the one you may initially think, since I’m coming from the perspective of an apostate. It’s not the obvious religious connotations of everything that is happening here, and regardless of what Edna may think, there are very definite religious connotations. Even if she didn’t get the healing powers and our spiritual connection here was limited to her near-death experience, there would be religious connections to this film. But that’s not my issue. The problem here is that Resurrection ends just as things are starting to get interesting. We get Cal going very far off the deep end, and then suddenly the movie ends, giving us a little coda at the end that seems to be a number of years in the future, with Edna living at the old service station she visited at the start of the film.

And it’s a shame, too, because Resurrection takes a very interesting take on this overtly religious topic. Certainly a great number of the characters attribute Edna’s healing abilities to a higher (or lower) power, but Edna herself is, for lack of a better word, agnostic with the source of her new abilities. This in itself is a fascinating idea, that she has a particular power and doesn’t immediately go to the thought of a higher power, or a power higher than simple love. That is worth exploring, but the film never takes that idea anywhere. Just as it begins to delve into the dark side or religious belief, it fast-forwards to the end, giving us a coda that’s meant to be sweet and meaningful and ends up being merely sweet. Ellen Burstyn is, of course, excellent, but I can’t help but think that her performance earned her an Oscar nomination specifically because of the early scenes that involved her walking with crutches and sitting in a wheelchair. I can’t say I was enthralled by her, although the performance is very good. Eva La Gallienne was also nominated, albeit for Supporting Actress. She’s fine, too, although she’s not on the screen for much of the running time.

I’d have loved to love Resurrection because the take on the topic is so interesting and because I love it when a film goes to a daring new place. Resurrection just doesn’t go far enough to ultimately be that interesting.

Why to watch Resurrection: It goes to some unusual places.
Why not to watch: It doesn’t go far enough or explain enough.