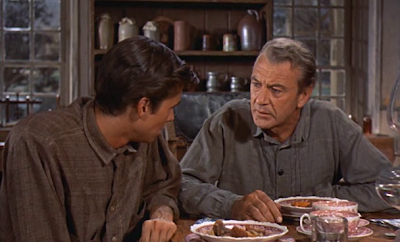 What is it with Gary Cooper and Quakers? In High Noon he marries a Quaker and in Friendly Persuasion, he is a Quaker. The most interesting thing about the Quakers isn’t that they eschew music and dancing, but that they are total pacifists. So, naturally in films that involve them as major characters, the entire point is to put them in situations where violence becomes an option and possibly a necessity. That’s certainly the case with Friendly Persuasion.

Jess Birdwell (Cooper) is a Quaker farmer who happens to be married to the local Quaker preacher, Eliza (Dorothy McGuire, who looks rather remarkably like Michelle Pfeiffer). Eliza, as the preacher, is more than a little dedicated to the Quaker ways. Jess, however, is not. There are also temptations aplenty for their three children: Josh (Anthony Perkins), Mattie (Phyllis Love), and Little Jess (Richard Eyer). The film starts as a light-hearted comedy as these four, particularly Jess, strain the limits of Eliza’s good nature by rebelling in minor ways against her Quaker preaching.

For instance, Little Jess has a running feud with Eliza’s pet goose. Her husband is forever wanting only to beat his friend and neighbor Sam Jordan (Robert Middleton) to the church on Sunday. Mattie constantly moons over Sam Jordan’s son Gard (Peter Mark Richman). As for Josh, well, we’ll get to him soon enough.

In fact, a majority of the film is the family straining against the Quaker ways in the small ways. At the county fair, Jess buys an organ without telling his wife. Little Jess gets involved in a shell game and is disturbingly good at spotting where the pea is under the walnut shells, much to the delight of the other players. Josh gets involved in an altercation. Perhaps worst of all, Gard convinces Mattie to dance with him despite that being hard against Quaker teaching.

And then the film takes a hard left turn. All of this nutty spoofing on the Quaker faith is well and good, but it happens that the film takes place during the American Civil War and the Birdwell family and their neighbors have the bad fortune to live directly in its path. Just as significantly, their hired man Enoch (Joel Fluellen), is an escaped slave. The second half (or so) of the film concerns the approach of a part of the Confederate Army and what this means for the family. For Jess, it means combatting his urges to pick up a gun and protect his family. For Josh, it means doing exactly that despite all of his mother’s preachings and warnings against this sort of violence. For Mattie, who becomes engaged to Gard, it means marrying someone who has gone completely against the beliefs of her family.

This is really the biggest issue with Friendly Persuasion; it’s more or less two halves of two different movies and it never really settles on a tone. Is it light and fun? Is it dark and serious? It tries very hard to be both, and so fails at both in some way.

Take for instance the sequence where Jess acquires a new horse. His old horse looks the part of a racer, but refuses to run, which means that Sam Jordan always beats him to the church. While out for a few days with Josh looking to sell some goods, they come upon a farm run by a woman and her three daughters. She wants to marry her girls off, so she needs a horse that will allow others to pass her, which her horse refuses to allow happen. All of this is in service of getting Jess a horse that allows him to beat Sam Jordan. But did we need these three girls mooning over Josh? Did we need a song? The sequence goes for far too long for what it accomplishes.

My guess is that this is an attempt to be something like a slice-of-life, or at least something approaching reality. Like life, the world of the Birdwells has its ups and downs, it’s moments of light humor and of terrible tragedy. I get that. But it never really hits on a solid tone, which makes it feel off for much of the film.

Ultimately, I didn’t dislike Friendly Persuasion, but I also can’t really claim to like it. I’m nonplussed by the whole thing. It’s interesting, but little more than just that.

Why to watch Friendly Persuasion: An interesting look at a unique religious sect.
Why not to watch: It’s not sure what it wants to be.