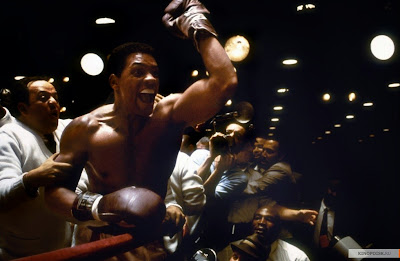 Every now and then, an actor known for fluff pieces, comedies, or summer blockbuster actiony pablum pulls off a role that demonstrates that he or she is deserving of a lot more respect. Such I the case with Will Smith and Ali. You could argue that Smith attempted to do this with the previous year’s The Legend of Bagger Vance. But it was Ali where Smith showed his chops. Of course, he immediately went back to summer blockbusters and sequels, but every now and then, Smith pulls out a performance that shows he’s better than a lot of his films. For what it’s worth, the same thing could be said about Jamie Foxx in this film, too.

Ali, like most biopics worth the time and effort, doesn’t cover the entire life of its subject, but focuses instead on the most interesting part of the subject’s life. In the case of Muhammad Ali (Will Smith) this means skipping his amateur career and jumping directly into his two fights with Sonny Liston (Michael Bennt), his conversion to Islam, his relationship with Malcolm X (Mario Van Peebles) and his troubles with the draft, legal battles, and eventual release from his military obligations and reinstatement of his boxing license. The film covers Ali’s first fight with Joe Frazier (James Toney) and concludes with Ali’s recapturing of the world heavyweight title in his fight against George Foreman (Charles Shufford) in the now-legendary Rumble in the Jungle. The film wisely avoids dealing with Ali’s decline, later years, and suffering from Parkinson’s disease. No, we get Ali in his prime, the Ali that was a force of nature as much as he was a force in boxing.

The biggest issue of the film is that the ending drags. We get to Zaire with a good 45-50 minutes left in the film, and really all we need and want is to get to Foreman-Ali. Admittedly, there was a delay in the scheduled fight and the events depicted in this final hour actually happened, but it seems relatively unimportant for the story we’re here to see. The central section concerning Ali’s dealing with his draft dodging allegations and legal troubles isn’t slow at all. It’s actually fascinating. But his marital problems? I honestly don’t really care.

The film hinges on a series of critical performances. Primary among these is Smith as Ali himself. Smith, as I mentioned a few paragraphs ago, is really good here. There’s only a remote physical resemblance (although there are moments), but the physical resemblance isn’t that critical. What is important is that Smith manages to capture Ali’s personality, his voice, and his patter. Smith is fairly believable as Muhammad Ali because he manages to capture Ali’s swagger, which aside from his skill in the ring, was the most memorable and defining thing about the man.

I mentioned Jamie Foxx at the top, and he’s worth noting in this film as well. Foxx is yet another example of a comic actor given a chance to prove that, as has always been said, comedy is harder than drama. Foxx, playing Ali cornerman Drew “Bundini” Brown is as real as Smith is playing Ali. Bundini is tragic and comic, his life following the same sort of path as Ali’s career, and there’s not a moment of Foxx here that isn’t completely believable. I also like Ron Silver as Ali’s trainer Angelo Dundee. Silver is almost completely unrecognizable in the role and plays it just about perfectly—always there, but always understated and in the shadow of his boxer.

The fourth and final noteworthy performance is that of Jon Voight as Howard Cosell. Here is a case where the actor looks almost nothing like the man he is portraying, and yet it is so evidently and obviously Cosell every time he appears on screen. Like Smith’s performance, Voight, though completely unrecognizable, gets the spirit of the man perfectly. Initially I couldn’t tell who was playing either Angelo Dundeeor Howard Cosell. After a few moments, I recognized Ron Silver. I had no idea who played Cosell until the final credits rolled. Voight is that transparent in the role.

Those performances, more or less, are the reason to spend time with Ali. The issue is that to do so, you have to spend too much damn time with Ali. Clocking in at just north of 2 ½ hours, Ali is a good 15-20 minutes too long. More critically, the boxing isn’t that good. While Michael Mann attempts to use the camera in interesting ways here, no amount of fancy camera work is going to disguise the fact that these are actors, not boxers. Nowhere is this more evident than in the final fight, which is where the boxing should be at its best.

The most egregious problem, though, is that the drama is artificially ramped up. Ali is portrayed in the Rumble in the Jungle as if he is on the edge of going down, as if the fight is near killing him. In truth, Ali invented the rope-a-dope for this fight. He let Foreman spend himself physically for seven rounds, picking his shots, and then, when Foreman was tired out, Ali dropped him in the eighth. He was never in the sort of trouble the film shows us. That artificial drama is completely unnecessary.

So it’s good. But it’s a one-and-done film. Ali the boxer is a national institution, probably the greatest heavyweight champion of the world, a unique sports figure, and possibly the greatest athlete of the last century. The film about him attempts to do him justice, but doesn’t quite get all the way there.

Why to watch Ali: Good actors doing what good actors do.
Why not to watch: It’s too long, the boxing isn’t that good, and some of the drama is manufactured.