Film: …And Justice for All
Format: DVD from Rockford Public Library on laptop. 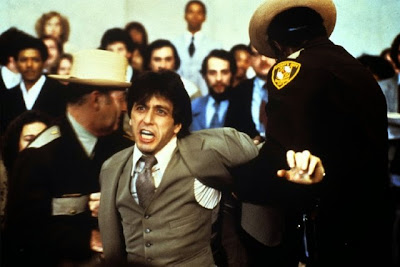 When you talk about actors in their heyday, you have to hand it to Al Pacino in the 1970s. The man did a lot of good work in that decade. I’m not going to take that away from him. In fact, I’ll even credit his work in …And Justice for All, because it’s a solid 1970s Pacino performance, perhaps even vintage. The problem here is just about everything else. Okay, the cast is solid. But the plot has real issues and the music, especially at first, is terrible.

A quick summary of the film would go like this: an honest lawyer who genuinely believes in the power of the law slowly realizes that the entire system is corrupt from top to bottom. He discovers this during a series of cases that all go bad in different ways but go bad for the same reason. In the end, he has to decide between his job and his conscience, and since this is a film about the law and lawyers, that decision naturally happens within the confines of a courtroom.

Arthur Kirkland (Pacino) is that lawyer, and he has his ethics despite being a criminal defense lawyer, and thus defending people he frequently knows are guilty of the crime of which they are accused. The case that is taking the bulk of his time is that of Jeff McCullaugh (Thomas G. Waites), who is actually innocent. McCullaugh is in prison for a crime he did not commit, and Kirkland is struggling to get him out of prison. The problem is that the evidence that exonerates McCullaugh has arrived a couple of days late, and just Henry T. Fleming (John Forsythe) refuses to allow it, letting an innocent man spend more time in prison. This is where we start the film—with Kirkland spending a night in jail for taking a swing at the judge.

Arthur also has the case of a transgendered man (Robert Christian) accused of armed robbery. Arthur is also dealing with an ethics committee, and in part is dealing with it by dating and eventually sleeping with one of the committee members (Christine Lahti). He also spends his Tuesdays visiting his grandfather (Lee Strasberg) in a nursing home. Today, we’d say that his grandfather had Alzheimer’s. It’s revealed that Arthur’s parents abandoned him and that his grandfather raised him.

The big turn happens when Judge Fleming, Arthur’s nemesis, is accused of rape and hires Kirkland to take the case. In fact, Kirkland is being blackmailed by the head of the ethics committee. As it happens, he once betrayed a client and gave him up because he knew he was guilty in a case that he wasn’t trying. It also comes out that Judge Fleming is not only guilty, but that he’d love to commit the crime again. Toss in Arthur Kirkland’s partner (Jeffrey Tambor) starting to lose his mind because a criminal he got off has murdered again, and you’ve got a stew of terrible indictments against the legal system.

My initial problem with …And Justice for All is that the music, especially in the opening sequences, is terrible. It’s 1970s sitcom terrible; I thought I had the wrong movie in except for the credits. It’s not only terrible, it’s wildly inappropriate.

But I can overlook bad music. After all, I love Ladyhawke, and that film has music so terrible it’s legendary. No, the real issue with …And Justice for All is that it’s simply too much. With a slightly different spin, and only a slight change is needed here, this becomes a comedy, because absolutely everything goes wrong for Arthur Kirkland. It manages to hold its tone and doesn’t slip into black comedy, but it could very easily. It seems like it’s indicative of the late Carter years malaise where it felt like nothing was going right.

Is there corruption in the legal system? Of course there is. But is it this bad? I would find that difficult to believe. Follow this film to its logical conclusion, and we’re told that virtually everyone in the legal profession is on the take, suicidal (I see that I forgot to mention the suicidal Judge Rayford played by Jack Warden), incompetent, or insane. We’re further led to believe that those rare people who don’t fall into one or more of those categories are systematically forced out. It’s too much. It some point, I simply threw up my hands at it and waited for the end.

Is it good? I guess. But I’m not sure it needs to be watched a second time. I enjoyed Pacino’s performance and I tend to like Jeffrey Tambor in everything, and he’s fantastic here (and he has hair!). But the plot is a dud, and with nothing more to recommend it, the music pisses me off more than it would have otherwise.

Why to watch …And Justice for All: Nobody does Pacino like Pacino.
Why not to watch: The music is awful and the story is so over-the-top that it loses believability.