Upper Class Twit of the Year 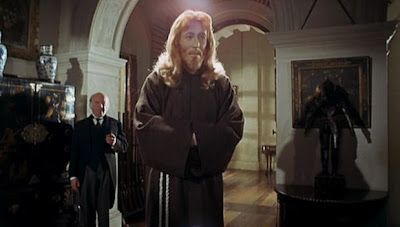 There are few movies that set a tone as firmly and completely as The Ruling Class does in its opening 15 minutes. In those first minutes, we are introduced to the 13th Earl of Gurney (Harry Andrews), a judge, who proposes a toast to the awesomeness that is England at a large gathering. He then returns home and speaks to Tucker (Arthur Lowe), his butler, while tossing aside his clothing. We learn here that all of the Earl’s sons have been killed one way or another overseas, which means he must remarry despite his more advanced years, thus providing an heir. Then, out of nowhere, Tucker provides the Earl with a silk noose, which he hangs over the bed. The Earl dons an admiral’s uniform and a white tutu and proceeds to asphyxiate himself in a piece of sexual oddity, but eventually slips off the ladder and hangs himself accidentally. It’s dark, it’s funny, it’s twisted, and it sets up the rest of the film as well as can be imagined.

The sudden death of the 13th Earl leads to the introduction of Jack Arnold Alexander Tancred Gurney (Peter O’Toole), the 14th Earl of Gurney. The problem is that Jack is completely insane, having been institutionalized for the last eight years. Specifically, Jack believes he is the human incarnation of Yahweh, he is God, Jesus, and the Holy Spirit. Upon becoming the Earl, he trades out his coarse monk’s robes for a white suit, but keeps the Van Dyke and the flowing locks and sleeps standing upright on a cross, his hands firmly gripping a pair of nails.

The problems seems obvious, but it goes a little deeper. Essentially, because he has been named the rightful heir to the title and the estate, Jack Gurney/Jesus/J.C. is legally entrusted with the entire family fortune. Naturally, this doesn’t go over well with the former Earl’s half-brother Charles (William Mervyn) or his wife Claire (Coral Browne), nor with Charles’s son Dinsdale (James Villiers). Jack’s therapist Dr. Herder (Michael Bryant) believes his patient is slowly returning to sanity, but is worried about the family’s new plan. Essentially, the idea is to marry JC/Jack off to Grace (Carolyn Seymour), who also happens to be Charles’s mistress. Once the marriage happens, the goal is to have the union produce an heir, after which time Jack can be declared legally insane and the heir can be named in charge of the estate.

This happens, mostly due to the reluctant work of Bishop Lampton (Alastair Sim), another member of the family. Jack doesn’t want to give up his delusions quickly. Worse for most of the people involved, Grace falls in love with the crazy man, and soon enough is pregnant. In an effort to shock Jack into sanity, Dr. Herder (who is specifically referred to throughout the film as “not British”) brings in another man who claims to be God. The two go after each other, and eventually Jack breaks. But he doesn’t break in the way everyone hopes. While he starts repeating “I’m Jack, I’m Jack” over and over, it soon becomes evident to the audience that he doesn’t think he is Jack Gurney, but Jack the Ripper.

The whole satirical point of the film is to skewer the upper class of British society as firmly and completely as possible. It’s no mistake that Jack is seen as terribly insane when he tinks himself Jesus but as a good and upstanding member of the aristocracy when he imagines himself a vicious murderer. There is no end to the personal humiliations that the film is willing to heap onto the moneyed blue bloods, which again is the entire point of the film. This culminates in Jack’s first cold-blooded murder, his framing of an innocent, and his eventual taking of his place in the House of Lords, stumping for public whippings and hangings, to thunderous applause from his peers.

The biggest problem with The Ruling Class is that it’s slow. This is a story that could be handily told in between 90 and 120 minutes instead of the more than 150 minutes the film actually runs. There’s quite a bit of dross here. Admittedly, most of the parts that could be legitimately cut would be cutting some good jokes, but a god joke in an otherwise extraneous five minutes is a fair trade.

I can’t believe I’ve gone this far without mentioning the fact that there are several musical numbers here. Spontaneously, the cast breaks out into song more than once during the course of the film. These numbers are short, but there are enough of them that I feel justified calling this a musical at least in part.

In truth, this is a difficult film to recommend. On the one hand, I find it very funny and sardonic. Anyone in the right mindset couldn’t help to find it darkly comic. I’m not sure what the test would be, though. Fans of the original Monty Python television show will probably not only spot but appreciate the bulk of the jokes here.

At the same time, I can also see this film being incredibly frustrating for a lot of people, and while I would disagree with that position, I can understand it completely.

In truth, the whole purpose of this film is the glorious insanity of Peter O’Toole. If I had seen this in 1972, or at least been first introduced to this style of O’Toole character first, I’d have been more impressed. It’s a great performance, but it’s not really that different from what he does in My Favorite Year or The Stunt Man. Still, he’s the main reason to watch.

Why to watch The Ruling Class: Better takedowns of British upper class society would be hard to find.
Why not to watch: Too slow, too long.