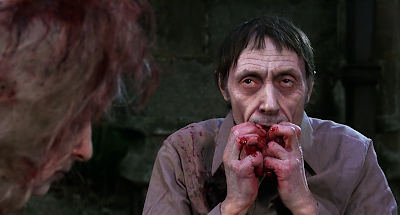 I love Italian-style horror movies from the 1970s in part because they all have a ton of different names. In the case of Let Sleeping Corpses Lie, there are a whopping 15 additional names for this film, most of which are Italian. The version I found on Hulu had the title The Living Dead at the Manchester Morgue as a title a couple of minutes in. This is despite the fact that the Manchester Morgue never appears in the film. Anyway, this is classic mid-‘70s zombie horror and it’s surprisingly entertaining and contains a fun amount of carnage.

How to explain this? George (Ray Lovelock) is on his way from Manchester to the Lake District in the UK to work on a vacation home. While filling up with gas, a woman named Edna (Cristina Galbo) backs into his motorcycle, damaging the front wheel. Fortunately for George, she’s headed to roughly the same area. So while his bike goes in the shop, she gives him a lift (actually, he drives) to where they’re going. They get lost, and while George tries to get directions, Edna is attacked by a man who disappears when she runs for help. Importantly, the place where they stop for directions is a farm testing out new equipment. This new equipment creates ultrasonic radiation that makes insects attack each other, thus nullifying their effect on the crops. Yes, I know this doesn’t make a lot of sense. Bear with it.

Their destination is Edna’s sister’s house. Katie (Jeannine Mestre), Edna’s sister, is a heroin addict who has been moved out into the country by her husband Martin (Jose Lifante) to clean her up. It hasn’t worked and they’re going to take her to a place to detox. While Martin is out taking pictures of flowers, Katie is attacked by the same guy who went for Edna. She runs for help to Martin, the attacker shows up and kills Martin, and now Katie, Edna, and George are suspects in Martin’s murder, particularly in the mind of the police inspector (played by no less a luminary than five-time Oscar nominee Arthur Kennedy).

To make a long story short here, the ultrasonic radiation is waking up the recently dead and turning them into zombies. There is a part where the main zombie (Fernando Hilbeck) rubs fresh blood on the eyes of a couple of corpses and causes them to rise up, too. Honestly, that doesn’t make a whole lot of sense. Really, none of it does, but I don’t care that much. The radiation is also causing babies to start attacking people in the hospital as well, but not much is made of this.

Essentially, the second half of the film consists of George and Edna, and sometimes Katie, running away from animated corpses and trying not to be shot by the police, who think that the two are part of a satanic cult. There are some nice gruesome bits that come along with this, which is the main reason anyone shows up for Italian-style horror from this era.

In a significant change from other zombie films, head shots don’t seem to do anything to these zombies. During the scene in the graveyard, a police officer (Giorgio Trestini) trapped with George and Edna plunks one of the zombies in the head with a rifle and she keeps walking, albeit with a little blood fountain coming out of the side of her head. Fire stops them, but the fact that the traditional zombie killing move doesn’t work adds an interesting touch to the film.

Really, though, this isn’t so much about plot or about consistency in the way the zombies come back from the dead. In fact, they seem pretty random about whether or not they want to kill their victims (which they do) or eat their victims (which they do only on occasion). It doesn’t matter. This is more or less about the splatter and about the moments of scare that run through it. And really, that’s what it’s good for.

One of the more interesting parts of the film is that much of it takes place in the daytime, something popularized the year before this came out with The Texas Chainsaw Massacre. This does the same thing, but also gives us people’s organs being ripped out and eaten under the noonday sun, so there’s that.

This was fun. It’s hardly a great movie, but it’s an entertaining one if you like a bit of gore and something mildly different in your zombie fare.

Why to watch Let Sleeping Corpses Lie: One of the more interesting ideas for a zombie apocalypse yet devised.
Why not to watch: Once again, science is evil.