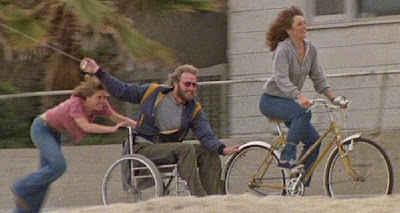 I did a little investigating on Coming Home before I watched it. Based on the story it tells, it’s not really a huge shock that the story comes from Jane Fonda’s association with Ron Kovic, the Vietnam veteran whose story became Born on the Fourth of July. There are some similarities here, both on and below the surface. Fonda, of course, was an activist against the war, as was Kovic. It’s hardly a shock, then, that our main male character her is a Vietnam veteran, in a wheelchair, and an active anti-war activist.

We start with two stories only slightly separated. Luke Martin (Jon Voight) is a paralyzed war veteran trying to recuperate in a VA hospital. We’re introduced to him briefly before we spend some time with Sally Hyde (Jane Fonda) and her husband, Captain Bob Hyde (Bruce Dern), who is just about to be deployed to the war. Off the captain goes, along with his friend Sergeant Dink Mobley (Robert Ginty). This introduces Sally to Vi Munson (Penelope Milford), Dink’s girlfriend and soon to be Sally’s friend, roommate, and confidant.

Vi works at the VA hospital mainly because of her brother Bill (Robert Carradine), who was deployed for two weeks before being returned to the states with severe PTSD. Working at the hospital gives her a way to be close to her brother. Wanting something to do, Sally begins to volunteer at the hospital as well, which is how she encounters Luke, albeit not in one of Luke’s better moments. She realizes that she knows him; they went to high school together. And, slowly, the two become closer, and romance begins to take root despite Sally’s conviction that she should remain faithful to her husband.

Of course, Bob does eventually come home with an accidentally self-inflicted wound. He’s conflicted and troubled. He also knows about the eventually-consummated affair between Sally and Luke. This happens because of Luke’s anti-war activism, which gets him investigated and tailed by military intelligence. Of course there’s going to be a confrontation, and of course, that’s big spoiler material, so we’re not going there.

Coming Home is one of those rare films that managed a quartet of acting nominations. Both Jane Fonda and Jon Voight won for their roles while Bruce Dern and Penelope Milford managed nominations. I think a case could be made for Robert Carradine as well, although his role was pretty small.

These performances, in fact, are the saving grace of Coming Home, because without them it would be almost overwhelmingly melodramatic. The possibility for melodrama is certainly here, but the film manages to avoid it pretty well overall. With a lesser cast, what would look like a soap opera turns into something real and even poignant. The three-way confrontation near the end of the film comes off as serious and heartfelt rather than forced, and it would be very easy for this to feel (and be) forced.

For all of the good performances, though, there is something that feels missing from Coming Home. I genuinely want to like this a lot more than I actually do, and the more I think about it, the more it’s the story that keeps me from loving the film. Too much of what happens seems to perfectly pat. A particular event happens (I won’t spoil it) that forces everyone into action, particularly sparking Luke’s activism. And it just so happens that his first stunt lands him on the news, and it just so happens that Sally is essentially walking past a television at the moment Luke is on. And it just so happens that this stirs something in her loins…you get the idea. Like I said, there’s a lot of potential melodrama here, and only the quality of the actors keep this form turning into a bowl of glurgey mush.

At the same time, I can see this as being the sort of film that would resonate with a good number of veterans. PTSD was even less understood in the ‘60s and in 1978 than it is now, an there were plenty of men who were trying to make sense of their lives and their world. Coming Home, despite the melodrama, is smart enough to treat these men seriously and with some dignity. Luke and Bob couldn’t be more unlike each other, but the film attempts to understand both men and condemns neither.

I would like more of a resolution, though. There are a couple of ways of interpreting the ending. One makes sense and is ultimately depressing. The other is more uplifting but harder to figure.

You can do worse than Coming Home for Vietnam films, but in all honesty, you can also do a lot better. However, if you want to pretend that the nude scenes are actually Jane Fonda (they’re a body double), knock yourself out.

Why to watch Coming Home: It’s The Best Years of Our Lives for a new generation.
Why not to watch: It skirts very close to melodrama.