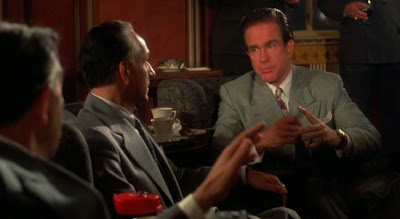 With a biopic, particularly one of a shadow figure like Benjamin “Bugsy” Siegel, the main question to ask is how true to history it actually is. With Bugsy, I honestly have no idea, but I’m also not sure I really care. Ostensibly, this film is about Benny Siegel, but in reality, it’s about the birth of Las Vegas as a desert Mecca. Vegas as a resort was Siegel’s brainchild, and more or less, this is what the film shows. That this is ultimately a tragic story is both the point and beside the point.

What I find particularly interesting here is the name of the film. The nickname of Bugsy was used only by people who had some distance between themselves and Siegel, at least according to the film. If we take the screenplay as gospel, Ben Siegel hated the name and wasn’t above violence for those who used it in his presence.

Anyway, as we start, Ben Siegel (Warren Beatty), a high-ranking member of the New York mob and personal friend of Meyer Lansky (Ben Kingsley) is sent to California. The idea is for Siegel to gain control of area betting parlors from a man named Jack Dragna (Richard Sarafian). The trip was only supposed to take a couple of weeks, but once in Los Angeles and visiting the set of a film starring his friend George Raft (Joe Mantegna), Siegel buys a house and plants himself in in the area. Things come to a head when Dragna’s operation is robbed by Mickey Cohen (Harvey Keitel). Siegel decides he’d rather worth with the guy who robbed him than the guy who got robbed, and makes a deal with Cohen. This episode also comes with the discovery that Dragna was skimming.

The main reason for Siegel’s desire to stay in California is Virginia Hill (Annette Benning), who initially rebuffs Siegel’s advances but eventually gives in. Naturally, this situation causes a great deal of friction with Siegel’s wife. Well, that and the fact that Ben and Virginia can’t seem to go more than an hour without one of them throwing something at the other. A great deal of the tension comes from Virginia’s host of former lovers, who include drummer Gene Krupa, several matadors, and another member of the mob.

Siegel’s life changes when he makes a trip out to Las Vegas, which is little more than a dustbowl at the time. However, gambling is legal in Las Vegas, and this gives him an idea. The thought is to create a resort hotel in the middle of nowhere and to build that hotel around a casino—essentially the model for the Las Vegas that eventually bloomed in the desert. Siegel sells his mob comrades on the idea, promising that the Flamingo, named after Virginia’s nickname, will become an oasis and an attraction for people to come to and gamble away their life savings. To get the place built, Siegel mortgages everything he has.

Bugsy is an interesting film for a number of reasons, not the least of which being the character of Ben Siegel himself. There’s no doubt that he’s the person we’re supposed to be following here, and for large parts of the film, he seems like a decent enough guy. And then, several times out of nowhere, Siegel becomes extraordinarily violent, losing his temper over nothing. A favorable appraisal of him would call him “passionate,” although manic may come a lot closer to the truth. He’s difficult to actually like and even hard to respect in a number of scenes, but it’s also impossible not to find him fascinating.

There are good performances all around here. Warren Beatty is primary, of course, but Annette Benning as Virginia Hill is similarly over-passionate and borderline out of control frequently. At times, the romance here is difficult to buy because of how constantly enflamed the two are—they fight not about current peccadillos but past lovers. A glance at an attractive person that might linger too long ends up with shattered vases and screaming. And yet, she’s fascinating as well. Joe Mantegna is as good as he ever is. The same can be said of Harvey Keitel, who plays a gangster as well as anyone working.

It’s Ben Kingsley who steals the show for my money, though. When he is on camera, it’s impossible not to watch him. There is a silent menace to his performance as Meyer Lansky. Kingsley’s Lansky is always calm and all business on the surface, but a raging cauldron of emotions below, and Kingsley manages to pull off this performance without batting an eye.

All of this is well and good, but Bugsy has a few real issues. The main one, and the thing that keeps this as a good movie instead of a great one, is that it loses steam part-way through. The planning of the hotel/casino and the birth of Las Vegas should be the main attraction here, but when we get there in the film, everything slows down. I’m not overly interested in the romance here. It’s far more interesting to me that Virginia evidently embezzled $2 million from the building fund for the Flamingo. This does become a plot point, but it never really resolves. The director’s cut, which adds a good 14 minutes or so to the original release does nothing to help this along.

Bugsy might simply be trying to do too much. Is it a biopic? Yes. Is it a gangster story? Yep. Is it about Las Vegas? Absolutely. Is it a romance? Well…it wants to be but doesn’t really get there in anything like a satisfactory way. It may simply be too scattered and goes in too many different directions for me to care much once the running time is done.

Why to watch Bugsy: A story worth seeing
Why not to watch: It tries to do too much.