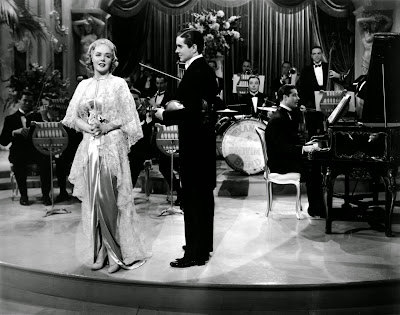 There are two basic kinds of musicals. There’s the type where everyone in the movie sings his or her feelings at various times and the story is moved forward in large part by the music and lyrics. I often have a verisimilitude problem with this sort of musical, but I can deal with them if the movie itself is good enough. Singin’ in the Rain is a prime example of this sort of musical and perhaps the greatest example of the style. The other sort of musical is, more or less, a musical about musicals. All of the characters are performers and the songs tend to be less about the current emotions of the characters but are instead a part of a show they are performing. Alexander’s Ragtime Band, the film in question here, is of the second sort.

As with many a musical of both stripes, Alexander’s Ragtime Band begins with a meet-cute between all of the members of our eventual love triangle. Society child and musical virtuoso Roger Grant (Tyrone Power) scandalizes his family by pursuing fame in the realm of ragtime rather than classical music. He and his band, including songwriter and pianist Charlie Dwyer (Don Ameche) have a try-out at a nightclub, but have forgotten their music. They spot a song called “Alexander’s Ragtime Band” and play through it, not realizing that the song belongs to singer Stella Kirby (Alice Faye). Hearing her music playing, she jumps on stage and sings, and the group is hired, but only as a complete group, meaning that Alice has a band and the band now has a singer. And, thanks to the song, Roger Grant is now dubbed Alexander and the band has a name.

Essentially, in addition to giving us lots of opportunities to hear popular music from about 1915 through the mid-1930s, the film is little more than an accounting of the various couplings of our main trio and a fourth character who shows up a big later. The band becomes successful, of course, and Charlie writes a song specifically expressing his feelings for Stella. However, despite their initial anger with each other, Stella and Alexander become a couple. Then World War I happens and Alexander goes off to war. While there, he inexplicably puts on a show in the Army because, well, the Navy did a show. Really, this is just an excuse for more singing. Eventually, he comes back from the war only to discover that Stella has married Charlie in sort of the ultimate dick move.

Eventually, Alexander starts up a new band, this time fronted by singer Jerry Allen (Ethel Merman), who becomes sort of his surrogate for Stella, who he still loves. Stella, of course, still loves Alexander, and eventually Charlie figures that out and the two divorce. Stella runs after Alexander, who is now in a relationship with Jerry, and things become additionally complicated when Alexander’s band leaves the States for a tour of Europe. Eventually, the band comes back, Jerry realizes she shouldn’t marry Alexander, and the band plays Carnegie Hall while Stella weeps about her lost love. I’ll give you three guesses how this ends, but you’ll only need one.

So, at least in structure, Alexander’s Ragtime Band isn’t really different from a lot of musicals of the genre. It’s difficult for me as a viewer who, in the most basic sense is supposed to want the eventual happiness of our main characters, to give much of a crap about what happens to them by the end of the film. This is particularly true in the case of Charlie and Stella. What sort of a friend marries someone’s girlfriend? Okay, if Alexander died in the war, fine. If everyone thought he was dead in the war but he showed up, that’s tragic, but it’s understandable. No, when Alexander comes back, Stella and Charlie have been married for a year. Keep in mind that America’s entry into World War I came about 18 months before the war ended, and for a chunk of his military service, Alexander was putting on a show in New York. It’s a dick move from both of them, and I’m certainly prone to feel bad for Alexander in this place, but not when he proves himself to be an emotional mush still hung up on the woman who tossed him aside like a used hankie simply because he wasn’t available.

The interesting revelation for me here Ethel Merman. My most enduring vision of her is as an old woman in Airplane!, one of the better jokes in that film. But who knew in 1938 that Ethel Merman was a young, attractive woman. It’s kind of mind bending to see this young, pretty slip of a woman absolutely belting out songs in Ethel Merman’s voice. Ultimately, Alexander would’ve been better off marrying her rather than pining for Stella.

The other thing that doesn’t work for me here is the time. This is a film that takes place over 20 years, roughly following a history of jazz from the pre-war beginnings of ragtime to the eventual Carnegie Hall performance in the mid-1930s of Benny Goodman’s orchestra. In all that time, none of these characters age. Eventually, Charlie grows a mustache, but beyond that, everyone still looks like he or she is in his or her twenties. Apparently, playing ragtime music and putting on shows is a fountain of youth. A less ambitious story, perhaps one that took place in a much shorter time frame would still piss me off story-wise, but would at least seem like it didn’t dabble in the realm of science fiction.

Alexander’s Ragtime Band is undoubtedly a movie that’s going to be liked more by people who like the style. I can appreciate some really good songs here, but the story leaves me completely cold.

Why to watch Alexander’s Ragtime Band: The songs are really good.
Why not to watch: The story is really stupid.