Film: The Wolf of Wall Street
Format: DVD from NetFlix on rockin’ flatscreen. 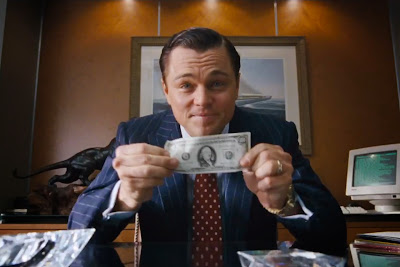 I knew when The Wolf of Wall Street showed up in the mail from NetFlix I was going to have a difficult time watching it. This has nothing to do with it being a movie I didn’t want to watch. Actually, the opposite is true; I tend to like Scorsese and I tend to like Leonard DiCaprio. No, the issue here was that I knew going in that there’s a lot of sex and drugs in ths film, which means that I can’t watch when my kids are around. Through no planning on my end, I got the house to myself for a chunk of time today, and I took the opportunity to watch.

My guess, as happens with films like this one is that most of my readers have already seen this, which means a short recap so as not to bore anyone. This is the story of Jordan Belfort (DiCaprio), a Wall Street trader with a fortune in the bank and a serious lack of control over his various appetites—that’s the sex and drugs from the previous paragraph. We see his rise and fall as a trader twice. It’s the second rise, filled as it is with shady dealings, cheating, massive amounts of drugs (seriously, Tony Montana doesn’t do this much blow) and wanton sex with virtually anything that moves, that takes up the bulk of the film.

Along for the ride with him, primarily, is Donnie Azoff (Jonah Hill), who tries too hard to look like a stereotypical WASP, complete with off-putting porcelain white teeth. The two, as well as their collection of employees and cronies, work a series of borderline cons and outright deceptions on their customers. This eventually involves a variety of government agencies including the FBI, not that any of this stops the insanity or the vast amount of incoming money.

There are only a couple of ways that this film can end, and it certainly ends in that way. It’s the getting there and the insanity, the wild sex, the epic drug use that is worth watching. It’s not about the destination, but the journey.

I’m going to make a few strange connections here. The first is with a personal favorite actor, Bruce Campbell. One of the things I like about Campbell is that he’s an excellent physical actor. Watch the scene in Evil Dead II when he attacks himself with his own hand to see what I mean. What’s the connection? It’s evident that Leonardo DiCaprio has the same sort of skill. I’m specifically referencing the scene where the epic-level Quaaludes kick in here, a scene that is absolutely rife with equal parts comedy and terror.

The biggest revelation here is that for anyone who didn’t already realize it, The Wolf of Wall Street marks Leonardo DiCaprio as one of the most talented actors of his generation. This is a gutsy performance because it is so completely over-the-top but completely within the realm of reality and believability. Jordan Belfort is playing tennis without the net, but not in such a way that we can’t believe the reality.

DiCaprio, while the focus of the film, is ably assisted by Jonah Hill and several other solid performances as well. Primary here is Margot Robbie as DiCaprio’s second wife. It’s an interesting performance because she is partially sympathetic and partially aggravating and annoying, and this is all by design. It’s also interesting to see Rob Reiner as Max Belfort, Jordan’s father. Reiner, of course, got his start as an actor, and it’s nice to see him in front of the camera again. I’m also happy to see a role for P.J. Byrne (as “Rugrat”), who is someone I recognized immediately. It took me awhile, but I finally realized that he’s someone I knew from Burn Notice (another Bruce Campbell connection).

Worthy of special note is Matthew McConaughey, who makes an appearance in some respects like Alec Baldwin in Glengarry Glen Ross. He appears briefly as sort of a spiritual mentor for Jordan Belfort, and he’s gone far too soon from the film.

The Wolf of Wall Street is, more or less, what Wall Street wanted to be, and because of that, it’s pretty great. I might also venture a guess that this is the sort of film that Martin Scorsese has probably always wanted to make as well. And all of us are the beneficiaries. Just don’t watch with the kids around. Seriously. It’ll scar them.

Why to watch The Wolf of Wall Street: DiCaprio solidifies his position as one of the great actors of his generation.
Why not to watch: If you have kids, you have to watch with one eye on the screen and one eye on the door to make sure they don’t walk in. Ever.