It Tolls for Thee

Film: For Whom the Bell Tolls
Format: DVD from NetFlix on laptop. 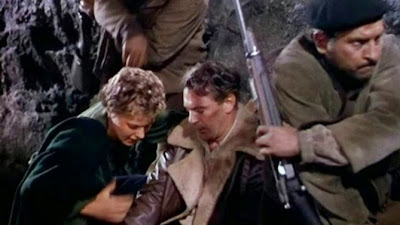 I have something of a love/hate relationship with the writings of Ernest Hemingway. On the one hand, I think he was one of the great short story writers of the 20th century in English or any other language. On the other hand, I tend to hate his novels. My biggest problem with Hemingway’s novels is that the man couldn’t write a female character of any value or substance to save his life. In anything longer than a couple of pages, his woman characters turn into mush. All they can do is depend on the men for everything. They’re typically so given over to being in love that they are incapable of the simplest action without approval. In their own way, they sort of presage the Twilight books, at least from what I’ve heard (thanks, Nick). That being the case, I can’t say I was entirely excited about For Whom the Bell Tolls. This was additionally true thanks to the nearly 3-hour running time.

Like a lot of Hemingway with which I am familiar, For Whom the Bell Tolls trades on Hemingway’s personal experience in the Spanish Civil War. That in and of itself is fairly noteworthy. The two sides in the war were the communist Republicans and the fascists, which were led by Franco. The U.S., of course, was at war with fascists in 1943, which means that this film is actually pro-communist. Our heroes, in fact every named character, is fighting for the communist side of the conflict. Filmmakers could get away with this in the mid-1940s. Imagine trying this during the McCarthy years.

Anyway, Robert Jordan (Gary Cooper) is a big American hero-type fighting for the Republican side in the war against the fascists. He is assigned the task of blowing a bridge to prevent the enemy from getting men and materiel across a river. To do this, he and his old guide Anselmo (Vladimir Sokoloff) hook up with a partisan group up in the mountains. This group is led nominally by Pablo (Akim Tamiroff) and Pablo’s wife Pilar (Katina Paxinou), who is actually in charge. Pablo is against the blowing of the bridge while Pilar is very much in favor despite the danger of making an escape once the bridge is blown.

It is also at this camp where Robert encounters Maria (Ingrid Bergman), a young Spanish woman recovering from the fascist takeover of her town. Maria, we learn later, was evidently raped multiple times by the fascists, although this doesn’t come up until later. Initially, we’re only told that they shaved her head as a sort of punishment for being the daughter of the town’s communist mayor. Regardless, sparks fly between Robert and Maria almost immediately. Pilar is absolutely behind this, but Pablo seems almost jealous of the attention Maria is paying the American.

The main conflict here comes when it becomes evident that Pablo has both lost his nerve for fighting and fears losing even the nominal control he has of the group. He does everything he can to prevent the group from even planning to blow the bridge, which leads to a near revolution and a very realistic threat of Pablo being killed by his own men. Trouble ensues from an unseasonable snow (snow would allow the retreat to be tracked) and the sudden appearance of fascists in the mountains near the rebel camp. Eventually, it becomes apparent that the fascists know about the planned Republican attack, which makes blowing the bridge even more critical.

For Whom the Bell Tolls is one of those rare films that was nominated for each of the major acting awards—Gary Cooper, Ingrid Bergman, Akim Tamiroff, and Katina Paxinou were all nominated. Paxinou won. Hard to say she didn’t deserve it.

Why? Because Paxinou is great in the role. Additionally, Pilar actually makes me rethink my prejudice against Hemingway’s female characters. Actually, that’s only partially true. One of the things that makes Pilar so viable as a Hemingway character is that essentially Hemingway wrote her as a man. Regardless, Pilar is pretty badass. She’s not afraid of battle, for one thing. More importantly, she’s not afraid of life.

For as awesome as Pilar is, though, Maria absolutely fulfills all of the stereotypes of a Hemingway woman. This is someone who has been through some terrible events in the past three months and as come out a survivor, willing to fight and die for her beliefs and the memory of her parents. But the minute a big, hunky American shows up, she immediately becomes incapable of doing anything but depending on him for everything. All she wants to do is please him and make him happy—her entire personality is subsumed into doing everything in her power to please him. It’s kind of disgusting, truth be told.

For Whom the Bell Tolls is a good story and one worth seeing, despite the fact that there’s a real desire to slap some sense into Maria. Love is fine, but that complete giving over of personality, desire, and agency because of it is really embarrassing. It’s also too long for the story it tells. Trim out a few minutes and we can talk, but there’s no reason this needed to run as long as it does. The romance isn’t that believable that we need to spend so much time on it.

For what it’s worth, the age difference of our romantic leads in real life was about 14 years. It’s not that terrible here—Cooper could still pull off 35. It’s a bigger issue that Ingrid Bergman was close to 30 but playing 19. Hell, there’s no reason she couldn’t have been in her mid-20s.

Why to watch For Whom the Bell Tolls: A mainstream pro-Communist film from Hollywood.
Why not to watch: Hemingway’s female characters suck (except for Pilar).