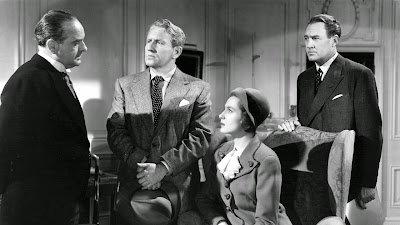 Typically, when a rare film shows up on Turner Classic, I DVR it so I can watch it at my leisure. I was aware that Edward, My Son played a day or so ago, but I completely spaced on setting up the recorder, which meant I had to get it online within the week. So, rather than risk not being able to see it at all, I watched it today. I’m not sure if that was the right call. I realize that my goal is to see all of these films on this Oscar list, but it’s ones like Edward, My Son that make me question the wisdom of that decision.

The film starts with Spencer Tracy walking out and introducing himself as Lord Arnold Boult. In the world of the film, we’re supposed to have heard of him because he’s incredibly wealthy, and tells us he likely owns the theater he imagines us sitting in. He also tells us about his son, Edward. It’s sad for Boult that we never got to meet Edward but we can’t because Edward, his son, is dead. And before you can say “doodly-doodly-doop” we’re back in the past.

What we get is more or less the story of Lord Boult and his wife Evelyn (Deborah Kerr) as they attempt to raise their son. The couple starts relatively poor, but Arnold has big plans for himself. He goes into business with a man named Harry Sempkin (Mervyn Johns), who has business acumen but has also served time in prison. Things go roughly for their new business. When it turns out that Edwrd has problems with his legs and needs an expensive operation, Boult decides to burn down the warehouse to collect the insurance money to pay for it.

This will be a theme as the film continues. Nothing is too good for Edward, and Arnold Boult will not be stopped when it comes to providing anything and everything that Edward might want. When Edward gets in trouble at his boarding school and is on the verge of being expelled, it turns out that Boult has purchased the mortgage on the school and holds the power of life and death over the institution, allowing Edward to stay put. No matter what Edward does, including getting a young woman pregnant, there is Lord Boult to bail him out of things.

There are other bits here as well. Not everything is about Edward, at least initially. Boult has an affair with his secretary (Leueen MacGrath, and no that first name is not a typo). When Evelyn finds out, Boult confronts her with her own requited but unconsummated love affair with family friend Doctor Larry Woodhope (Ian Hunter). But even this comes back to Edward because boult refuses his wife a divorce because he doesn’t want to break up the home for the boy’s sake.

It’s around this point that the film takes some interesting moral turns. Evelyn is convinced that Edward is going to turn out exactly like his father, which is something that she doesn’t want. However, Arnold is too powerful for her to escape, so she turns to drink and begins wasting herself away, both to dull the pain and almost as a protest against her husband’s various actions. There are some dark turns as well. Harry Sempkin turns up after another stint in prison, and when Boult won’t help him immediately, Sempkin retaliates by killing himself by throwing himself off Boult’s office roof.

That moment, actually, is one of the best in the film. Arnold is chatting up his secretary, who he eventually has an affair with after he has met with Sempkin. We don’t see the window, but as the two are talking, there is a shriek, and we see a shadow rush past on the wall behind the couple. They run to the window, and there on the sidewalk below is Lord Boult’s old partner. It’s dark and sort of creepy, but it’s masterfully done.

What I don’t understand about Edward, My Son is what I’m supposed to think walking away from it. We know from the start that Edward is dead (I won’t reveal how. Suffice it to say that his death seems to be pretty much in keeping with his wastrel life). We know that Lord Boult committed a variety of crimes and other sins specifically to prevent his son from ever knowing a moment’s pain. And? What’s the takeaway here? I would love to lavish gifts on my kids, but that doesn’t mean I’ll commit arson or insurance fraud to do it. Is that the message here? Don’t commit crimes to pay for expensive surgeries?

I was initially surprised at the nomination for Deborah Kerr. For the first half of the film, she’s pretty much a non-entity. She comes into her own in the second half when she’s hitting the bottle with regularity, though. It’s half of a great performance, because it’s really great for only half the film.

The biggest issue I have here, though, is that Spencer Tracy feels miscast. At least in my opinion, he’s far too likable to play this much of a cad. You know who could have done this role? Robert Mitchum. He had the ability to play a stone cold bastard, and that would’ve helped hugely in selling whatever premise there is here.

And the real kicker? I haven’t listed any actors who play Edward because Edward never appears on screen. Seriously?

Why to watch Edward, My Son: Drunk Deborah Kerr.
Why not to watch: All this fuss, and you never get to see Edward.