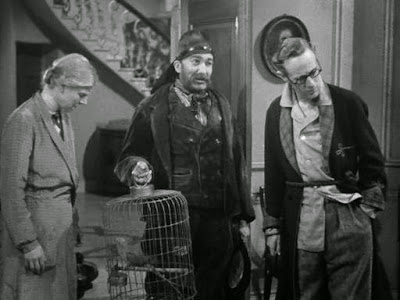 I’ve mentioned before that I tend to put the “very long wait” films at the top of my NetFlix queue. Because NetFlix is NetFlix, my full list has something north of 50 films that fall into that category. When I see the opportunity to knock one of those films off without having to wait for NetFlix, it’s difficult to resist the opportunity. And, well, Pygmalion was available on Hulu+ thanks to Hulu having nabbed the streaming rights for the Criterion Collection. So it’s one less “very long wait” film for me.

I’m not going to go too heavily into a rundown of the story here, since this is absolutely the source material for My Fair Lady, which everyone should have seen (and if you haven’t, shame on you). This is not merely the same basic story, it’s a pared down version of the exact same story. Pygmalion is much tighter and shorter, though. In addition to everything that was added through musical numbers, My Fair Lady adds a number of scenes, almost doubling the rather trim 98 minutes of its non-musical original version. Much of this is done through montage, which is used effectively here as a way to indicate all of Eliza’s training without having to sit through her learning how to pronounce all of the vowels correctly.

So, anyway, this really is a pared-down version of the classic musical, although it’s more appropriate to suggest that the musical is a heavily bulked-up version of this. Eliza Doolittle is played by Wendy Hiller, who I’ve never liked much. I think, though, that based on her performance here that the reason I haven’t thought much of Wendy Hiller is not because of her but because of the roles she took. She’s really, really good as Eliza Doolittle. It pains me to say this, but I prefer her to Audrey Hepburn in this role scene for scene. She’s far less annoying initially (although the guttersnipe version of Eliza is plenty annoying) and has a great deal more fire and backbone once she’s been educated. I like this version of the character quite a bit.

Leslie Howard takes the role of Professor Henry Higgins. I like Leslie Howard when he's got good material, and this is one of the first times I've seen him in material that really suits him. He’s everything Franchot Tone was and manages to also be everything Franchot Tone should have been, at least here. Howard’s Professor Higgins is a cold-hearted son of a bitch, which is exactly how the role should be played. In his hands, Higgins is something like a solipsist. He has emotions, but only as they concern him. No one else has any feelings or opinions that matter at all. He feels completely within his rights to be as rude as he wishes to everyone—especially Eliza—and is shocked when someone else takes offense. He’s a bastard, and that’s really what makes him work so well.

Additionally, the pairing of Hiller and Howard works better than the later pairing of Hepburn and Harrison (and what’s with all of the “H” names). For one thing, they’re much closer together in age, and so make a much better on-screen couple. They’re also equally acerbic to each other, so there’s a much better personality match as well. Audrey Hepburn is too sweet and always seems so saddened to do anything that might hurt someone else. Wendy Hiller is pure vitriol in the penultimate scene, which is exactly what sells the whole thing so well. Hiller’s anger and emotion is needed, if only as a counterpoint to Howard’s cold rationality.

In the end, though, the main difference between this original version and the musical follow up is not the addition of a bunch of classic songs or the massive difference in length; it’s how we understand and react to Eliza herself that makes the difference. In My Fair Lady, we either feel sorry for Eliza or we fall in love with her because it’s Audrey Hepburn, and how can you not fall in love with her a little? In Pygmalion, we may not fall in love with Eliza Doolittle, but we end up liking her and, more importantly, respecting her. We have no doubt that this is a woman who has learned to rely on herself and learned to like herself. It’s a grand thing, indeed.

And, of course, it’s still all about linguistics, which makes it awesome.

Why to watch Pygmalion: A classic story with a script created by the original author.
Why not to watch: It’s pretty cold through a lot of it.