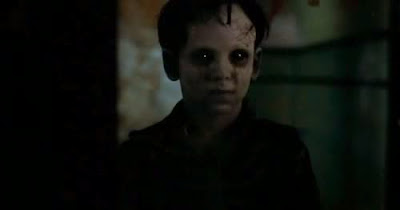 The Devil’s Backbone is one of those rare movies that appears on all three of my horror movie lists. It’s also a film I’ve avoided reviewing for some time. The reason for that is simple: I love The Devil’s Backbone like it is one of my own children. From the first time I saw it, this film rocketed into my all-time top-5 and has stayed put. What the hell do I say about it more than it’s damn close to perfect and everybody should watch it? Glowing, effusive, ridiculously positive reviews aren’t that much fun to write or read, but that’s what we’re in for here. I love everything about this movie.

For those who have seen Pan’s Labyrinth but not this one, we’re in similar territory. Pan’s Labyrinth is, in many ways, the younger sister of this film. Change the girl to a boy and change the fantasy aspects to a ghost story and you’ve got the basic idea. We’re still in the Spanish Civil War and we’re still in a film where the story works as a metaphor for the war and the war works as a metaphor for the story.

Carlos (Fernando Tielve) arrives at a Spanish orphanage with his tutor and his father. He thinks it’s because they are there for medical attention, but it’s actually to drop him off to stay. Both his father and tutor are fighting in the civil war on the doomed communist side, and neither wants young Carlos around when the inevitable happens. The orphanage, run by Dr. Casares (Federico Luppi) and Carmen (Marisa Paredes), is sympathetic to the communist side of the battle.

Immediately, Carlos is subjected to some hazing by the boys already there, particularly Jaime (Inigo Garces), who is the biggest and oldest of the orphans. Carlos also has the bad luck to be give the bunk of Santi (Junio Valverde), a young boy who has gone missing from the orphanage. The adults believe that he ran off during a bombing raid, but the other boys are convinced that Santi is dead, but is still around as a ghost, who they call “The One Who Sighs.”

After a couple of days of rough treatment, Carlos works his way into the confidence of the other boys, mostly by taking punishment that he didn’t deserve from Jacinto (Eduardo Noriega), a handyman around the orphanage and a former resident. Carlos also becomes the one to whom Santi appears and speaks, mostly in the underground cistern of the orphanage. He repeatedly tells Carlos that many will die, but it is unclear whether this is a warning, a prophecy, or a threat.

I really don’t want to say more. This isn’t a film I want to spoil for anyone.

One of the things I tend to love about the work of Guillermo del Toro is his opinion of monsters. He seems fascinated with monsters and rather than taking a dim view of them, the monsters he depicts are, at worst, neutral. Santi is certainly a figure of fear in The Devil’s Backbone, but he is not a creature of evil here. In del Toro pictures, the greatest evil never comes from the monsters, who can’t help what they are. No, the evil comes from humans. We are the source of the greatest innocence and the greatest darkness in his world.

I also love the design of Santi. While he is certainly terrifying, there is also something beautiful about him, the cracks in his skull like a broken porcelain doll, blood flowing out and up. He is both awful and tragic, and a wholly unique creation. Creations like Santi are one of the many reasons I love del Toro movies.

I’m gushing, of course. I expected to when I finally got to reviewing this film. I don’t know how I would improve on The Devil’s Backbone. To me, in its story, in the way it was filmed, in del Toro’s use of the camera…I don’t know that I could do any better. The film is further enhanced by a collection of fantastic performances. The adult players, particularly Marisa Paredes, Eduardo Noriega, and especially Federico Luppi are all wonderful. It is Fernando Tielve and Inigo Garces who make the film for me, though; they both give performances far more mature than their years. In fact, all of the kids are great.

Why to watch The Devil’s Backbone: Because it’s damn-near perfect.
Why not to watch: Because if you don’t, you can’t be my friend.