Ten Days of Terror!: The Howling 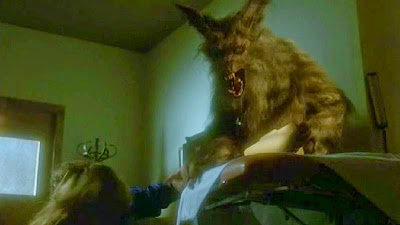 I like to think that at least on paper, werewolf movies have a lot of potential. I mean, you’ve got something that’s human but also not, it’s bestial and terrifying, it can kill horribly, and it has the power to infect the innocent with its evil. The problem is that most werewolf movies don’t really do much for me even though I really want to like them. The Howling, as it happens, is pretty well thought of in horror circles, even though it’s the second-best werewolf movie of 1981 (An American Werewolf in London came out the same year). And while there’s a lot going for The Howling, there are also some real problems with it that are two halves of the same coin. First, it looks its age (while American/London does not). Second, even if it didn’t, the effects don’t measure up to its werewolf cohort film.

We start with Karen White (Dee Wallace) is a television anchor who has been stalked by a creeper who authorities and the resident psychologist Dr. George Waggner (Patrick Macnee) believe to be connected to a recent rash of killings. In an attempted sting, she agrees to meet the stalker in an adult bookstore, but technical difficulties cause problems with her transmitter and she loses the police detail. Long story short, the cops show up just as she’s about to be ravaged and the perp, who turns out to be named Eddie Quist (Robert Picardo), is gunned down.

Naturally, Karen is shaken by the event. On the advice of Dr. Waggner, she and her husband Bill (Christopher Stone) head to The Colony, his retreat for special patients who need a place to recharge. What Karen doesn’t know and we suspect (and are eventually proven correct) is that The Colony is actually werewolf central. In fact, Eddie Quist was a werewolf and is still alive since the cops shot him with standard rounds and not silver bullets.

Of more pressing concern to Karen is that Bill is immediately targeted by Marsha (Elisabeth Brooks) as a sexual conquest at The Colony. Of course Bill is attacked one night and bitten, which makes him a werewolf, and of course he and Marsha have freaky werewolf sex in the moonlight at one point. This is a pretty interesting scene, save for the fact that at the end, we get some of the worst animation I’ve seen in a non-animated film in a very long time.

Anyway, Karen’s co-workers Chris (Dennis Dugan) and Terry (Belinda Balasky) start investigating on their own and discover some interesting things about Eddie. Terry goes to The Colony to investigate and encounters what we know to be a werewolf at Marsha’s cabin, and it turns out Marsha’s last name is Quist, too. She discovers this when she goes hunting through The Colony’s files, which is also where she meets the revived Eddie Quist.

We’ll talk about the transformation in a minute, but this scene is actually really good. The Howling, for all of its issues, handles the werewolf makeup just about perfectly. This is not a dog/man hybrid but a really nasty creature. There’s no pathos here, no feeling sorry for the werewolf the way we do for poor Larry Talbot in The Wolf Man. This is a creature of pure evil and malice.

Eventually, Karen starts to suspect that there are bad things going on and Chris decides he needs to check out The Colony as well. Karen has her own run-in with Eddie Quist, and this time, we get the full werewolf transformation. And if the animation earlier didn’t kill the film for me, this is where the film dies a little. I know that there are plenty of people who talk about the effects in The Howling positively, but I just can’t. There’s lots of weird pulsing things going on in Eddie’s head, for instance. And it takes too long. Karen just stands there and watches it happen for a couple of minutes instead of trying to get away. Seriously? She does eventually fight back, but it all seems so…dumb.

Anyway, Chris shows up armed with silver bullets and he and Karen do what they can to knock out The Colony and get away cleanly. And then we get the ending, which tries to tie things up but also leaves open plenty of room for a sequel, of which there were many.

I get that The Howling is a classic of the genre, but I also think that a lot of the reason fo that is pure nostalgia. People liked it because it had some good scenes and some pretty good gore for the time, and that love has kept people talking about it since then. But it really looks its age. Contrast this with the transformation sequence in An American Werewolf in London, which still looks great, and you have something that shows a lot of fraying and also shows it’s whisper-thin budget.

I can’t say I didn’t enjoy The Howling, but I think it’s reputation as a great film is mostly undeserved.

Why to watch The Howling: It’s fun.
Why not to watch: The effects do not hold up, particularly the animation.