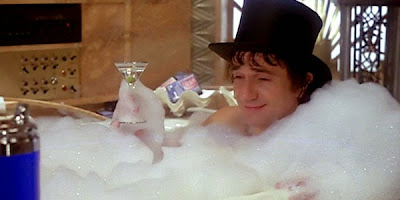 I was extremely worried with the first ten minutes of Arthur. I don’t typically find drunkenness funny. More than that, I really don’t find drunks who find themselves funny to be that amusing, and that pegs our title character in a nutshell. “Strap in,” I thought. “This is going to be a rough one.”

Fortunately, Arthur Bach (Dudley Moore) is sober for the next half hour. The first ten minutes establishes Arthur as a drunken playboy who seems to live on scotch and pick up prostitutes more or less at random. And then it’s suddenly the next morning and Arthur is mildly hungover and while we still have to deal with his drinking, but he’s not sloppy drunk and giggling at his own jokes, at least for a while. This is also where we get an introduction to Hobson (John Gielgud), Arthur’s smart-assed butler, manservant, and possibly his only friend in the world. It’s obvious right away that Arthur is a man-child who has no responsibilities. He’s also incredibly lonely.

Soon enough, Arthur meets with his father (Thomas Barbour) who tells him that he must get married or he’ll but cut out of the family’s vast fortune. Specifically, he is to marry a wealthy and extremely dull and vapid socialite named Susan Johnson (Jill Eikenberry). As it happens, on the same day that he is told to marry within the month, Arthur spots a young waitress/wannabe actress named Linda Marolla (Liza Minnelli) shoplifting a tie. He gets her out of a trip to the police station and instantly falls for her, and thus we have our plot.

That’s really it. Arthur has to marry Susan or be disinherited, but he really just wants to marry Linda, who is a common working class girl with an out of work father (Barney Martin). So he has to choose between an ultimately depressing and lonely life of luxury or love. Throw in his growing up when Hobson takes ill, and you’ve got a simple but effective plot that takes us all the way to the happy ending we expect in a romantic comedy about people who hand out more in tips than most of us make in a year.

Arthur is a movie I want to like more than I do. I actually like Liza Minnelli in this role; she could work a well-written and funny role when she was in her prime as an actress, and she does that here. Dudley Moore is also easy to like and to even feel some sympathy for despite his being more or less a spoiled bastard in this who stands to inherit a fortune that, in today’s dollars, would still dwarf most people’s imaginations (and in 1981 dollars was an unheard of amount). It’s John Gielgud who steals the movie, though. He’s an absolute snobbish asshole, and it’s easy to tell that he’s having a great time performing the role from start to finish. He also gets the best lines throughout, all of them delivered with a subtle grace and a just-subtle-enough sneer so that we can enjoy his being superior to everyone else in the film. No doubt this is what won him the Oscar for the role.

But the drinking, which is central to the film and central to the character of Arthur, is really off-putting. Arthur is likable and funny when he’s sober and attempting to deal with the issues in his life, but as a drunk, he’s annoying at best. The constant laughing at his own jokes is incredibly irritating, and it happens after every single sentence he utters when drunk. I’m not sure this passes for comedy anymore, and I’m equally unsure of why it ever did. Some of these scenes go on too long. When he shows up drunk at Linda’s house and knocks something over, we see him try to piece it back together for what feels like half the movie before he finally gives up. I know that was intended to be funny, but it’s really just sad, then dull, then aggravating.

Overall, though, Arthur is harmless fluff. It’s light and breezy and has some genuinely good moments, most of them involving John Gielgud, who not only deserved the Oscar, he should’ve been bronzed so as to remain Hobson until the world ends. But Arthur has definitely lost a step. It’s not funny to see a guy driving himself around and drinking himself into oblivion while doing it.

It’s worth noting that the title song was a massive hit (and also won an Oscar). It’s one that will immediately claw its way into your skull and reside there for a few days after hearing it. Oh, and from what I understand, you're better off leaving both the sequel and the remake alone.

Why to watch Arthur: John Gielgud the way he should always be seen.
Why not to watch: Drunkenness isn’t funny, and the theme song will stick in your head like an ice pick.