Three's Not Always a Charm 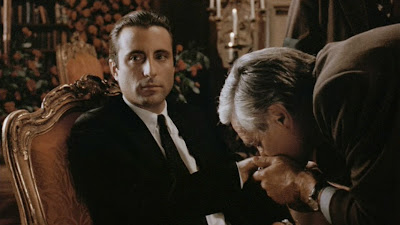 I can’t say it was with a great deal of relish that I decided on The Godfather Part III today. I’ve seen this one before. I’ve mentioned in the past that while I think the first two Godfather films deserve their reputation, I almost never feel like watching them. With the third installment, I’ve never really felt much desire to revisit it at all. But it is on the Oscars list, and like it or not, I had to get to it eventually. Going in, I remember thinking of this as the least of the three Godfather films, but also as being better than its reputation.

It is, of course, the continuing story of the Corleone family, and more specifically the continuing saga of Michael Corleone (Al Pacino), who took over the family business at the end of the first movie. The main thrust of the film, at least at the beginning, is Michael’s attempt to recover his reputation from years as the head of a large and powerful Mafia family. As much as he can, Michael has gone straight, but he still has deep ties to the family, having turned over his criminal interests to a man named Joey Zasa (Joe Mantenga).

Part of his effort to recover his name is a foundation created to help the underprivileged, particularly in Sicily. Michael places his daughter Mary (Sofia Coppola) in charge of the foundation. All of this has earned Michael the title of Commander of the Order of St. Sebastian. At the party following the ceremony, we are introduced to Vincent Mancini (Andy Garcia), illegitimate son of Michael’s long-dead brother Sonny. Vincent is embroiled in a feud with Joey Zasa which erupts into open warfare. Michael decides that despite his temper, Vincent is the right one to control the family.

A great deal of the film concerns financial dealings that have ties to the Mafia and that are also at least legitimate on the surface. A part of Michael’s attempt to leave his past behind is to take a controlling interest in a company called Immobiliare, of which he owns a nearly-controlling interest. He makes a move to acquire an additional 25% share of the company, that 25% being controlled by the Vatican, essentially buying off the bad debt of the Vatican Bank run up by Archbishop Gilday (Donal Donnelly) in exchange for the voting shares of the company. Additionally, Michael divests himself of all of his holdings in casinos, making a number of other dons quite rich, and specifically stiffing Joey Zasa, who retaliates by having a helicopter come in and gun down the entire room, with only Vincent, Michael, and a couple of others escaping.

And so it’s all retaliation and war between the families, with old friends turning on each other in a quest for power. That power, it turns out, goes up extremely high, with tendrils reaching not only into the Vatican, but in ways that may ensnare the Pope himself. Along the way, Vincent becomes the true head of the Corleone family, Michael suffers a stroke, and old family friends like Don Altobello (Eli Wallach) make choices that have long-term and often fatal ramifications.

The Godfather Part III does get a lot right. It has in many ways the same sweep as the earlier films in the series, even if it feels like a much smaller story. It focuses far more on the family aspect of the Corleone’s and also covers a much shorter period of time. It gets the revenge part right, too. Once Vincent becomes the head of the family, there is one of those classic Godfather montage sequences where multiple enemies of the Corleone family are systematically eliminated in various ways while Vincent himself is elsewhere, seemingly blameless. This is one of the things we sign up to see in a Godfather film, and it’s handled really well, and is actually worth waiting for. A lot gets resolved in those few minutes, and they are worth it.

On a less important note, I also absolutely love that Don Novello, who made his career back in the day playing the character of Father Guido Sarducci, has a role in this, albeit a small one. If nothing else, whomever did the casting gets points for that.

But there are problems here, too. Primary among these problems is Sofia Coppola, who gives what is regularly considered one of the worst acting performances of the last thirty years. I can’t disagree with the common impression of Sofia Coppola’s performance. She’s routinely wooden throughout the film and also constantly looks like someone has broken wind directly under her nose. She hardly ruins the film as many claim, but she is its weakest point.

Beyond Sofia Coppola’s impression of a pine board, the biggest problem that The Godfather Part III has is that it’s the weakest of the three films and the first two in the series are considered two of the greatest films ever made. Most movies are going to pale in comparison to The Godfather and The Godfather Part II. It’s rather like the third movie in the Alien franchise. On its own, it’s an interesting B-movie with a cool monster. As the third in that trilogy, it’s so far below the other two that in comparison, it ends up being considered terrible.

So, while The Godfather Part III isn’t terrible—in fact, it’s pretty good—you’re still better off with the first two.

Why to watch The Godfather Part III: It’s genuinely better than its reputation.
Why not to watch: All of the complaints about Sofia Coppola are dead on.

Posted by SJHoneywell at 9:26 PM