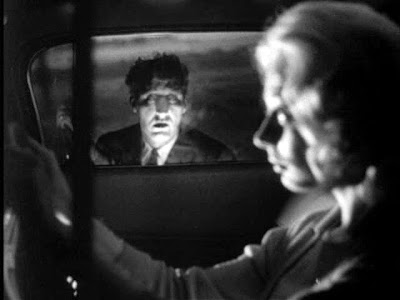 There are some stories that keep coming back. These iconic stories work when they are done well because they speak to something inside us or bring up the demons that we try to push back into the lizard part of our brain. Carnival of Souls is a film that taps into the same place as a story like “Occurrence at Owl Creek Bridge” or a movie like Jacob’s Ladder. If you’re familiar with either of those stories, where Carnival of Souls goes won’t be a surprise. With this particular story, though, it’s not about the destination but the journey.

I figured I was in for a rough ride (no pun intended) at the start of the film when we begin with a drag race featuring one car of men and one car of women. To suggest that this sequence was poorly filmed and edited is to be very generous. In addition to the “drag race” happening at a sedate pace, there’s no cohesion between the shots. Regardless of this, the drag race ends with the car of women going over the side of a bridge and landing upside down in a river.

Later, as the river is being dredged for the car, Mary Henry (Candace Hilligoss) wanders up from the river, unable to remember how she escaped from the car. Shortly thereafter, Candace takes a job as a church organist in Salt Lake City and drives across the country to get there. Along the way, she hallucinates the appearance of a strange, white-faced man (director Herk Harvey, uncredited as “the man”). Eventually, she reaches her destination and settles into something like a rooming house.

The hallucinations of the man don’t stop, though. She starts seeing him everywhere. She is also drawn to a mysterious old abandoned carnival near where she lives and works. It is here that she has recurrent visions not only of the man, but also of other, similar creatures with white faces and blackened eyes. Frequently, these ghouls are dancing to the music she is playing on the church organ. Her mental state causes her to break into eerie pipe organ music when she should be playing hymns, which causes her to lose her job. She also hooks up with her boarding house neighbor, John Linden (Sidney Berger) because of her fear of the man.

Anyway, everything gets incredibly trippy by the end, with Mary running from ghouls at the abandoned carnival. It’s the final shots that sell the whole story, though, and connect it with the stories mentioned in the first paragraph here.

There’s a lot to talk about with this film both on the positive and negative sides. Carnival of Souls is almost obscenely low budget, coming in for under $20,000 total, and that low budget shows through frequently. There are significant editing problems and frequently the sound doesn’t match the action on screen. Things like this serve as a reminder of the low budget and the almost amateurish nature of the production. There’s no escaping that this would be a much better film with a better editor and a budget triple (or more) to work with.

The thing is that Carnival of Souls works despite these terrible shortcomings. It does this perhaps because of its low budget, which forces it to go for the creeps instead of outright scares. The film manages to create an unsettling atmosphere that continually keeps the viewer off-kilter. It’s more than just the black-and-white cinematography that does this. At several times in the film, Mary becomes something other than herself in the sense that she can no longer interact with the people around her. No one seems to see or hear her. If that’s not a Twilight Zone episode, I don’t know what is.

Like many a good horror movie, Carnival of Souls never really gets to the point of terror or even fear during its short running time. It produces the kind of images that stick with the viewer and come back hours or even days afterward. It strikes at odd times, not creating that terror, but creating the terror for true psychological horror in the moments after viewing. No amount of low budget problems can cancel this basic success.

Carnival of Souls, while initially ignored when released, has risen to enjoy a sort of success as a cult film. It deserves that status, and probably more. It’s production values and basic problems prevent it from being taken too seriously by those who demand such niceties in their film. For those willing and able to see past its basic flaws, Carnival of Souls is filled with unexpected pleasures and terrors of the psyche.

Why to watch Carnival of Souls: An unexpected head trip.
Why not to watch: It’s got typical low-budget problems.