Film: Morocco
Format: Video from The Magic Flashdrive on laptop. 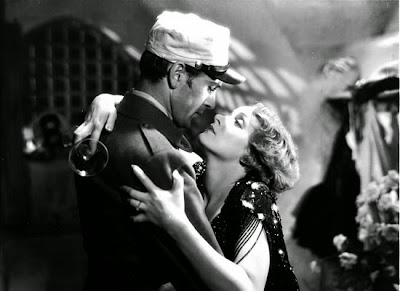 There are plenty of conceits in older films that one learns to deal with, with enough of the films watched. One learns, for instance, that comedy tends toward the physical (which is fine) and that drama tends to mean melodrama. Directors and the talent hadn’t yet learned the art of being subtle with anything. The farther away we get from the silent era, the less this becomes a problem. I can deal with most of these conceits. The one I’ve never really been able to handle is the idea that many a director and moviegoer in the 1930s thought Marlene Dietrich could sing. She couldn’t, and so any film that involves multiple Marlene Dietrich torch songs is alternately comedic and painful for me. That’s what we’re signing up for with Morocco; Dietrich plays a vaudeville singer.

So strap in, because we’re getting a pair of Dietrich numbers before the first thirty minutes are up. We travel by map to exotic Morocco, where Amy Jolly (Dietrich) has arrived in Morocco to perform at a local club for the wealthy residents as well as the common troops of the local Foreign Legion regiment. She is accosted off the boat by a man named La Bessiere (Adolphe Menjou), but Amy Jolly is far too jaded to be interested in some fancy boy who tries to pick her up at the docks. As it happens, as Amy arrives, the legionnaires also return, one of those being a man named Tom Brown (Gary Cooper).

Brown, we soon learn, is a ladies man. One of those ladies that he has a past with is Madame Caesar (Eve Southern). To make things interesting, Madame Caesar is married to Tom Brown’s commanding officer (Ullrich Haupt), who is well aware of his wife’s past indiscretions. In fact, he observes his wife approaching Tom and Tom ignoring her advances. Why does he ignore Madame Caesar? Well, because Amy Jolly handed him her room key during her act. Jealousy causes Madame Caesar to sic a couple of natives on the couple, who Tom handily beats senseless. This doesn’t prevent Caesar (who saw the whole thing) from pressing charges and accusing Tom of a crime.

Ah, but we can’t have Gary Cooper in prison, can we? No—Caesar lets him out specifically so he can send Tom to Amalfi Pass, ostensibly with the hope of getting him killed off (or killing him himself on the way). Caesar is going along this time, which certainly adds to the idea that Caesar wants him bumped off. If nothing else, he can force Tom into the most dangerous and difficult assignments that crop up along the way, which will satisfy his own lust for vengeance and will prevent him from doing the deed himself.

By the time we get to the end, there are a few important things to keep in mind. First, Caesar might be a stick in the mud and officious, but he’s not a bad guy. In fact, the bulk of the nastiness comes from the person of La Bessiere, who wants Amy Jolly for himself, and even he doesn’t swing that close to evil. He just throws his money around to get what he wants. But Gary Cooper is the hero here and Amy Jolly is the romantic interest means that the two of them will be together in some fashion by the end. Anything less wouldn’t be a film from this era. There’s no shock about where we’re going with this film; the only real question is how we’re going to get there by the final credits.

So, there’s nothing here that you haven’t seen before and frankly seen better. Thankfully, Marlene Dietrich doesn’t sing past the first half hour, so that’s a bonus. There’s no doubting that she was a forceful screen presence. It’s also interesting to see Gary Cooper in the role of something of a rakehell rather than a Boy Scout. I suppose it’s also interesting in the sense that the romantic rival played by Adolphe Menjou isn’t specifically a bad guy, but just the guy that we don’t want Amy to end up with.

What the film lacks is any serious conflict or passion. For all of the mooning and swooning Marlene Dietrich does, I never really got the sense that there was anything between her and Gary Cooper. There’s a single action sequence in the entire film, and that runs a couple of minutes long and has no real resolution. We’re supposed to see this as a true romance for the ages, and yet the whole thing comes across as almost emotionless.

You could do a lot worse than Morocco, but you can do a lot better as well. It’s worth seeing if you come across it, but it’s not really worth searching for unless you want to see a very young Gary Cooper or have a thing for Dietrich’s always-off-key singing.

Why to watch Morocco: Gary Cooper before he was Gary Cooper.
Why not to watch: No matter what you’re told, Marlene Dietrich can’t friggin’ sing. And Gary Cooper can’t salute.