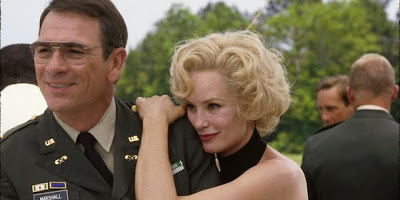 I seem to be saying what I’m about to say a lot lately: the movie I watched for this review has no idea what it wants to be. Blue Sky is one half domestic drama and one half military thriller, resulting in a complete muddle of a film that has a couple of grand performances at the center. But grand performances in the service of what? I have no idea. Blue Sky, which was shelved for four years after wrapping because of Orion’s money problems, is a mess of a film. It tries to be something for everyone and ends up being something for no one.

Major Hank Marshall (Tommy Lee Jones) is one of the players in the American nuclear testing program in the 1950s. His job, more or less, is to monitor radiation, and he has slowly come to the realization that above-ground testing is an increasing issue. This, and the fact that his wife Carly (Jessica Lange) is a “free spirit” who does things like sunbathe topless within sight of the base, much to the enjoyment of the men. After her last display, Hank is transferred to Alabama to start over again. We get the feeling, particularly from the comments of the Marshalls’ daughters Alex (Amy Locane) and Becky (Anna Klemp), that this is not the first time Hank has been transferred because of Carly’s inappropriate behavior.

Once we get to Alabama, it soon becomes evident that Carly isn’t so much a free spirit as mild-to –moderately deranged. She wigs out completely when they get to the base and the long-suffering Hank calms her down. But there’s going to be more issues in Alabama, since Carly catches the eye of Vince Johnson (Powers Booth), the base commander. When Hank is sent out of town to monitor an above-ground test in Nevada, things start to spin out of control. It’s made more complicated when older daughter Alex begins dating Johnson’s son Glenn (Chris O’Donnell) and the pair catch Carly and Vince in flagrante at an abandoned part of the base.

What further complicates things is that during the above-ground test, two cowboys from a nearby range are caught in the blast and irradiated. Rather than deal with the situation, it is immediately hushed up and Hank is prevented from talking about it at all. Everything comes to a head when Hank returns to Alabama and decks Vince. Ccording to Hank, this is because of the two contaminated men, but there’s no doubting that some of his anger comes from Vince sneaking into his bed while he was gone. To cover the whole thing up, Vince has Hank committed, which he claims will have only a minor effect on Hank’s military career. Part of this is to cover his own ass concerning his dalliance with Carly and part of it is because Hank has become more and more convinced that underground testing should be used, which is against the standard policy.

So up to this point, we’ve had both a domestic drama and a military thriller. Now we get a splash of Thelma and Louise as Carly decides to drive from Alabama to Nevada to get the two cowboys to go public with what happened to them. When they don’t she rides out onto the testing site herself before another scheduled test. And everything, well, there’s something like a resolution at the end.

Blue Sky’s biggest issue is, as I said at the top, that it’s completely confused on what it’s supposed to be. It wants to be a domestic drama and explore the relationship between Hank and Carly. It wants to give us glimpses of Carly’s obvious mental illness, not so we can judge her, but so that we can better understand her. But at the same time, it wants to have all of the intrigue of the government and the military doing bad things and one lone man standing against them to see justice done. I think we’re supposed to root for Carly and not hold her responsible for evidently wanting to have sex with every man she sees. I think we’re supposed to see her as she sees herself, which is partly as a glamorous movie star and partly as a tragic case who could have been something other than a military wife.

The best thing about Blue Sky is Jessica Lange, who pulls off the role about as perfectly as it could be done. It required a particular blend of sexuality, naivety, predatory instinct, and detachment from reality, and she has the part down perfectly. Tommy Lee Jones is good as well, but unlike Lange, he doesn’t seem to have a real through line for what Hank is supposed to be, other than a scientist who loves his wife regardless of her behavior.

A great performance is a great performance, though. Lange raises this film in my estimation greatly, but I didn’t like the character. In fact, I really like only Hank (I feel sorry for him) and the daughters (I feel sorry for them, too). And the plot is a muddle. It shoots off in all directions, much like Carly. It’s fine to have a character who turns on a whim and has no plan, but that generally doesn’t work for a plot. It sure doesn’t here.

Why to watch Blue Sky: The two stars.
Why not to watch: It’s a confused mess of multiple plots.