All the World's a Stage

Film: The Dresser
Format: DVD from NetFlix on rockin’ flatscreen. 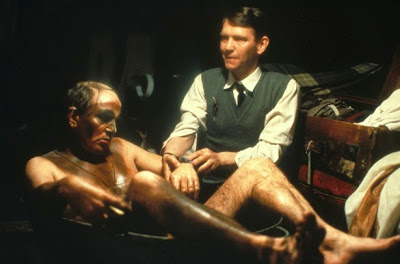 It’s not rare for a film to get multiple acting nominations, but it is rare for a film to get two nominations for the same award. It happens now and again, of course, but it’s pretty unusual. The Dresser is one such film, and I’d be hard-pressed to suggest that the Academy was wrong for nominating both Albert Finney and Tom Courtenay. The film itself is a small one, a little story, but the performances of those two actors are truly grand in the greatest sense.

The plot is almost a nothing. A great Shakespearean actor referred to only as Sir (Albert Finney) is attended at all of his performances by Norman (Tom Courtenay), his dresser. Norman, after years of essentially being Sir’s servant, knows every mood of the man and every possible whim. The troupe has fallen on hard times because of World War II—all of the best young actors are off fighting in the war.

When the film starts, we see the end of a performance of Othello. We learn not that Sir is merely a talented actor, but that he is also an incredible tyrant behind the curtains. He upbraids everyone in the company yells about everything, even when things go well. Even Norman takes some of the heat, but takes it in stride. In part, he deals with this because he’s used to it and in part because he takes frequent nips off a bottle of brandy in his back pocket.

The next day, the company heads off to a new theater and a new series of Shakespearean plays. Once in the new town, Sir seems to undergo some sort of mental breakdown and, for lack of a better word, freaks out in the middle of town. Norman rescues him, but Sir ends up in the hospital, seemingly deranged. It appears that the show for that night (King Lear) is to be cancelled, but Sir checks himself out of the hospital and returns to the theater. But he is not himself by any stretch, and his mental collapse seems almost complete. Left on his own for a few minutes, he starts putting on the makeup for Othello again and begins ranting that despite having performed Lear more than 200 times, he can’t remember any of the lines.

It is Norman who gets him prepared and gets him out onto the stage (with a hitch or two) during a bombing raid. And the show goes on, with Sir performing at his best on the stage and still deranged and manic off, with Norman doing his best to hold everything together for one more show, one more performance. With his frequent pulls off his brandy bottle, it’s evident that this is not something particularly new.

While all of the performances are very good, it is the two men who take (pardon the pun for this stage play-turned-movie) center stage. Albert Finney is all bombast and tragedian. He is larger than life on stage and off, he acts in exactly the same way. He is almost a comic character were he not so terribly tragic. This is a man who has lived his life on the Shakespearean stage and now essentially sees himself as a character in one of the plays. He is, to himself, a great man and while he at least mouths the right words to the audience, in private he believes himself surrounded by incompetence and hatred. He is the sort of man who takes nothing so seriously as himself. Finney could not be better in this role. I tend to like Albert Finney, and I’m not sure he’s ever been better than here.

But for all of Finney’s power, it is Tom Courtenay who is a revelation here. Norman is the long put-upon servant, underappreciated, disliked by almost everyone and doing everything he possibly can to ensure that Sir’s world never shows a crack or a crumble. What this means for us is that Courtenay’s performance is forced to work on two levels. On the one hand, he is all smiles and capering to keep Sir in line and get him ready for the next show. But beneath, he is a seething mass of emotion and pain that only comes out when he is forced to talk to someone other than Sir.

I will not spoil the ending, but the last five minutes of the film belong to Tom Courteny, and it is some of the most riveting five minutes of film I have seen in a long time. There is such anger, such pain, that it all feels completely real, and I can only imagine that he spent the next day in bed trying to recover from it.

This is not a film to watch if you want spectacle. Finney and Courtenay are worth seeing here, but this isn’t the sort of film to rev you up and get you excited. It’s small and perhaps it suffers from being about these two men, one who is small but thinks he is big and one who is small and knows it. But without question it’s worth seeing for what these two men bring to the screen. It’s a remarkable film for that, if nothing else.

Why to watch The Dresser: Two of the best performances you’ve seen in a long, long time.
Why not to watch: It’s slow, which might put some people off.