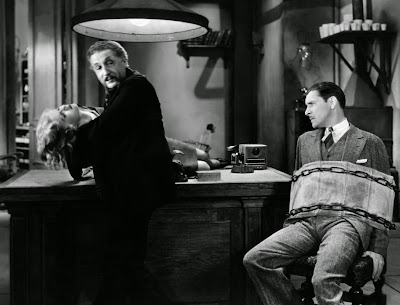 I find that I can only watch the really old films on the Oscars list rarely. There’s a real necessity to, as much as possible, put oneself in the mindset of the time. This is particularly true in the case of early talkies. When the talkies started, silent films were already an established form and had grown and matured. The early talkies are in a real sense the very early childhood of the films we watch today. Because of this, the acting can be a real issue. Any drama in this early days is, more or less, melodrama even if that’s not intended. The over-the-top acting style makes that true. In the case of Bulldog Drummond, this is very true of everyone except the star.

Hugh “Bulldog” Drummond (Ronald Colman) is a retired British military officer, which has a whole series of connotations for the late 1920s. He tells his equally stereotypical friend Algy (Claud Allister) that he is bored. Wanting some excitement in his life, Bulldog takes out an ad in the newspaper asking anyone to send him something exciting and fun to do. Basically, he’s becoming a public, one-man version of the A-Team.

Shortly thereafter, Bulldog and Algy sit around a table opening up envelope after envelope of pleas for help and ideas when Bulldog finds the one he wants. A young woman claims that her father is being held against his will in an insane asylum. Immediately, Bulldog creates a fantasy of a dark, mysterious, beautiful woman in danger and decides that this is the case he wants. Off he goes, with his butler Danny (Wilson Benge) and Algy in hot pursuit, desperate to protect him.

And, of course, Bulldog’s fantasy is the reality. The girl in question is Phyllis (Joan Bennett), who claims that a collection of criminals is holding her father in an effort to steal his property and money. This group of criminals is led by Peterson (Montagu Love) and Irma (Lilyan Tashman). There are a number of comedic moments when Algy becomes infatuated with Irma and all sorts of adventures breaking into the asylum to rescue Travers (Charles Sellon). Over the course of the film, Algy gets involved, Bulldog gets captured, Phyllis gets captured, disguises happen, there are some weird sexual advances from the evil Dr. Lakington (Lawrence Grant) and everything ends with the good guys safe, the bad guys on the run, and Phyllis declaring her love for Bulldog Drummond. Is that a spoiler? It shouldn’t be. There’s really no other way for this film to end.

One of the issues that any film like this from this long ago faces is that it’s incredibly easy to read. There’s not a single surprise here once we have the basic characters set and the scenario figured out. The characters themselves are all broad stereotypes because they almost have to be. The late 1920s were not specifically noted for their subtle shades of character. None of the characters beyond Bulldog Drummond is really that interesting to a modern audience, although I can’t imagine that this wasn’t wildly fun for audiences of the time.

Let’s take Algy as an example. For just a moment, imagine in your head the stereotype of a turn of the century British minor noble. That’s Algy. He never appears in something other than a tuxedo. He wears a monocle. He’s completely clueless in all situations but supremely confident that he knows what is going on all the time. The moment you first see Algy and hear him talk for the first time, you know everything you will ever know about him as a character. He’s that guy and he’s never not that guy.

Bulldog Drummond is hardly the greatest film going. The one real saving grace from a modern perspective is Ronald Colman. It’s obvious that Colman is having a great time making this film. He’s having a blast, and he’s also the only character that is remotely interesting despite toeing the line of the stereotype pretty closely. But again, even here, you know that he’s not really in danger at any time. Everything is going to come out fine in the end because, well, Bulldog Drummond isn’t going to die or anything, right?

There’s no real reason to see this unless you’re a completist. It’s fun for what it is, but there’s nothing here so exceptional that you need to track it down. It’s worth noting, though, that Bulldog Drummond as a character was at least partly the model for James Bond. So if you’re a Bond fanatic, you’ve got a better reason to spend time here.

Why to watch Bulldog Drummond: Ronald Colman is having a great time.
Why not to watch: It shows its age throughout.