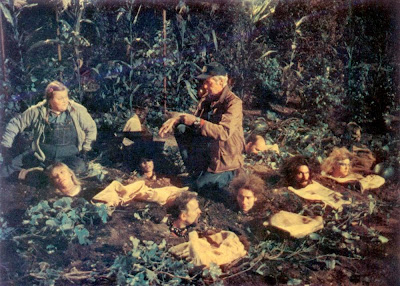 I’d never seen Motel Hell before today, but I remember seeing trailers for this when I was a kid. It was one that never really interested me that much at the time except for the morbid fascination I always kind of have with horror movies. But 1980 was a couple of years before I was interested in horror films. I’m actually a little surprised I haven’t seen it before now. Movies like this were the stock and trade of mom and pop video stores back when video stores were a thing.

So, while I hadn’t seen this before, I knew the basic story. The high concept version is that a farmer/motel owner traps unsuspecting guests and passersby, buries them up to their neck in his backyard, cuts their vocal chords so they can’t scream, and fattens them up. When they are ready, he digs them up, butchers them, and turns them into a variety of smoked meat products he sells to his guests he decides not to turn into jerky. The original tagline for them film was “It takes all kinds of critters to make Farmer Vincent fritters.” You can just feel the ‘80s horror vibe washing off of it, can’t you?

Motel Hell is straight out of that camp section of horror where things happen because they are necessary for the plot and not because they make any sense. In fact, without an astonishing amount of suspension of disbelief, about half of the first 25 don’t make any sense. The movie doesn’t give us any reason to suspend our disbelief; we’re just supposed to.

I should probably go into more detail on that. As the film starts, our main character/cannibal-in-chief Vincent Smith (Rory Calhoun) shoots out the tires on a passing motorcycle. The passenger of that motorcycle is Terry (Nina Axelrod), who is taken back to the hotel and cared for. Her boyfriend Bo (Everett Creach) winds up in the garden with his vocal chords cut. The next day, Vincent explains to Terry and to his brother Sheriff Bruce Smith (Paul Linke) that Bo has died and Vincent has buried him in the local cemetery. And Terry just accepts this after a short explanation.

A little later on, a county inspector named Bob (played by the awesomely named E. Hampton Beagle) shows up to inspect Vincent’s pigs. While there, he suddenly notices the strange stand of bushes on the property, which has almost certainly always been there. As it happens, this is the entrance to Vincent’s “secret garden” where he keeps his victims. For whatever reason, Bob becomes suspicious and shows up again at night, and thus becomes a new entrant in the buried-up-to-his-neck club. But why is he suspicious? He just is.

Then things really start to get weird. Both Bruce and Vincent decide that they have taken a liking to Terry, who goes full Stockholm Syndrome in a matter of days. None of this sits well with their sister Ida (Nancy Parsons, who is very much the best thing in this film), who decides to kill off Terry when she can. Terry goes so far as to attempt to seduce Vincent despite their age difference, who insists they get married before doing the deed. And, of course, this means that Terry will have to be let in on the secret of Vincent’s delicious, delicious smoked meat products.

But it is fun, and really, that’s enough. It’s fun to see Rory Calhoun play a role like this, because it seems so out of character. It’s fun that one of the victims that shows up in the ground is played by John Ratzenberger. It’s fun that we get to hear the gravelly tones of Wolfman Jack and that he plays one of the television preachers. So much of this is comical, whether intentional or unintentional (and much of it feels unintentional), that it’s difficult not to appreciate it on some level.

Just don’t expect it to be anything more than a B-level exploitation film, and you’ll be fine with it. It’s also about 10 to 15 minutes longer than it needs to be.

Why to watch Motel Hell: One of the great goofy horror premises of its decade.
Why not to watch: It’s more unbelievable than most films of this nature.