Two Hours would Overstay the Welcome

Film: One Hour with You
Format: DVD from NetFlix on laptop. 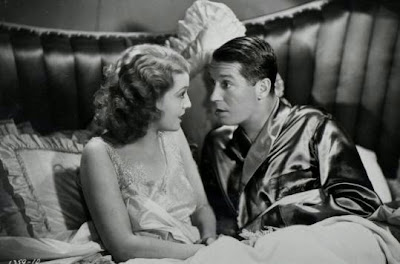 Films like One Hour with You are infuriating to me. On the one hand, it’s a difficult film to dislike. It’s charming and comes complete with the delicate and mildly naughty touch of the great Ernst Lubitsch with some uncredited assistance from the great George Cukor. On the other hand, the people in this film need to all be stood in a long line and slapped repeatedly. I have trouble with fluff pieces like this one because while there’s nothing specifically unpleasant about them, there’s also a constant low-grade irritation for me.

Since One Hour with You is a musical romantic comedy, we can guess from the start that we’ll be getting a happy ending by the time this short little nothing winds up. More than that, we can guess within the first couple of minutes that our main couple is going to experience a series of misunderstandings that would be easily resolved with a couple of words. Really, it’s more or less the chance to look at a couple of pretty people and hear a couple of peppy songs. That’s it. And, since it’s Maurice Chevalier, which means a lot of fourth wall breaks where he speaks directly to the audience.

As the film opens, the police are warning each other about the fact that it’s spring in Paris, which means that lovers are using the local parks for smooching purposes and not spending money in the cafes. So, the cops start rousting couples out of the park when we come across Dr. Andre Bertier (Chevalier) having a dalliance with a young woman. As it turns out, the young woman is his wife, Colette (Jeanette MacDonald). Ah, they are married and still crazy about each other, and we are left to imagine a hearty and robust sex life between the two of them. That night, Colette tells her husband that she is meeting up with her friend Mitzi (Genevieve Tobin) the next day. Mitzi was once her very good friend, but the two haven’t seen each other for years.

Mitzi, as it turns out, is married to a fairly dull professor named Professor Olivier (Roland Young). She’s bored and has been evidently getting her kicks outside of the marital bed, since Olivier is considering having her tailed by a private detective. She leaves to meet with Colette, and as it happens, gets into the same cab as Dr. Bertier. She makes a few not-so-well-hidden plays for him and he leaves, determined to be faithful to his wife. The two women meet and compare notes on their lives, which they do in a series of non-sung rhymes. Then Andre comes home and realizes exactly who Mitzi is and realizes that she has definitely set her sights on him. He becomes a tower of Jell-o, sometimes doing what he can to stay faithful and sometimes wavering.

Colette, in the meantime, suspects that Andre is being unfaithful specifically because he is going out of his way to avoid Mitzi, which means things like sitting next to other women at dinner parties. Mitzi, of course, fuels these fires will attempting to bed Andre herself. Furious, Colette decides to cheat herself, with Adolph (Charles Ruggles), who was the best man at her wedding. And it’s wacky sexual hijinks for everyone until the running time concludes just under 80 minutes after the beginning.

So, here’s my quandary. On the one hand, this is a comical, breezy little film that isn’t intended to be taken seriously for a moment. That’s good, because it would be impossible to take any of this very seriously. The songs are pretty fun and I find it very difficult to really dislike Maurice Chevalier too much. He’s entertaining. Additionally, while I don’t think much of her singing style, I’ve found that I can watch Jeanette MacDonald without too much trouble. She’s a good comic actress, does a lot of her acting with her facial expressions and has excellent timing. So, while this isn’t a film to watch to delve deeply into the eternal questions of Humankind, it’s a pretty harmless way to spend a little more than an hour in front of a screen.

On the other hand, I have a great deal of trouble sympathizing with any of these people. Andre complains of being only human and being subject to temptation, but if Mitzi is his style, he’s kind of an idiot. I find nothing appealing about the Mitzi character. Sure, I know there are people who act the way she does, but that doesn’t make me like her or want anything good for her. If Andre can be so easily lured away from his wife because someone pursues him aggressively, he’s kind of an asshole.

But, it all works out in the end, which is what we expect and kind of what we want. This is a decent little film. If you want a really fun little romantic musical from the period, I’d recommend Love Me Tonight, which continues to be fun and entertaining and shows Maurice Chevalier and Jeanette MacDonald at their best. I guess what it comes down to is that I don't reallly thing marital infidelity is that funny.

Email ThisBlogThis!Share to TwitterShare to FacebookShare to Pinterest
Labels: Best Picture, comedy, Ernst Lubitsch, musical, One Hour with You, romance