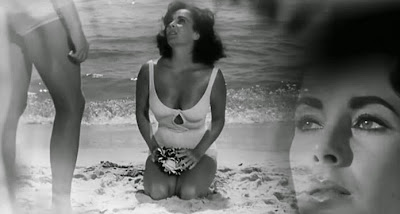 And I do mean dark. While the topic of homosexuality wouldn’t be considered that taboo in this day and age, in 1959 it was still a very touchy topic. In the 1937 the film takes place in, it was even more taboo. But we don’t stop at homosexuality with Suddenly, Last Summer. No, we’re going to delve deep into insanity, lobotomies, family evils, hidden crimes, and much darker subjects of which I will not speak here. Oh, this is a merry-go-round of evil and darkness, power, corruption, and deep family secrets. I had no idea what I was getting into here, but I can’t for a moment say I’m upset that I dove in.

We open in the operating theater of a public New Orleans mental hospital. Dr. John Cukrowicz (Montgomery Clift post-accident and looking like a war victim) is performing a new and radical surgery called a lobotomy. The lights of the theater go out in the middle of the operation because of the lack of funding for the hospital. A solution is in place, though. Cukrowicz is something of a celebrity in the area and has gained the attention of Violet Venable (Katharine Hepburn), an extremely wealthy widow currently in mourning over the death of her son the previous summer. She wishes to meet with Dr. Cukrowicz, who is instructed by the hospital administrator Dr. Lawrence Hockstader (Albert Dekker) to do everything he can to get the woman to fund them.

What the doctor hears is a part of a very disturbing story. It would seem that the previous summer, Mrs. Venable’s dear son Sebastian was vacationing in Europe with her niece Catherine Holly (Elizabeth Taylor) when he died. She seems very much to be avoiding the actual topic of her son’s death. Instead, she wants Cukrowicz to deal with Catherine, who is currently institutionalized, having gone insane from the circumstances of Sebastian’s death. Violet Venable wants Catherine to have a lobotomy, and more or less promises that she will fund the hospital to the tune of $1 million and a new building.

Ah, but naturally this goes much deeper than Catherine being insane. Naturally before performing such a drastic operation on a patient, Cukrowicz wants to examine her, and the more he does, the more he becomes convinced that Catherine may be experiencing some sort of mental shock, but is clearly not insane. But the pressure mounts, and not merely from Violet. Attempting to force the lobotomy, Violet attempts to bribe Catherine’s mother (Mercedes McCambridge) and son (Gary Raymond) by promising them a small fortune if they agree to force her into the operation.

And, of course, we get a final confrontation where everything that actually happened to Sebastian Venable finally comes out. And as dark as the film has been, it drops straight into pitch black until the final frame. Oh, it’s a thing of dark, dark beauty.

Suddenly, Last Summer is based on a one-act play by Tennessee Williams, and it certainly shows. All of the performances are magnificent, although the main three are the anchors that hold it in place. I tend to like Mercedes McCambridge. I didn’t recognize her immediately, but there’s no disguising that voice, even with a New Orleans accent. I was initially surprised by Katherine Hepburn’s nomination because she’s gone from the middle of the film, but no one performs like she does.

There are moments when Elizabeth Taylor’s performance feels affected, but every time it does, these are moments when she is recovering from some sort of sedation or under the influence of one drug or another. It’s Montgomery Clift who is the biggest surprise to me, though. I tend not to like Clift much although I do like him sometimes. He’s magnificent here. I’m genuinely shocked he wasn’t nominated for something here.

For all of the great performances here, though, it’s the story that is the main sell here. This is so much darker and more disturbing and more shocking than I could have imagined for a film of this vintage. It feels far more at home in the era of the mid-1970s. There is a direct line from this film to the horror classics of that decade despite this not being classified as a horror film. With a little tweaking at the end, though, this is absolutely a film right in the heart of that genre.

The best part of this is that while it goes to places that are dark beyond belief for the time, it never actually mentions what is at the heart of the whole thing—that Sebastian was a homosexual and that Violet refuses to admit it or come to terms with it. There’s that constant obvious denial of the thing unsaid throughout the entire film, so strongly hinted at…and then it dives so deep into a sort of mass insanity. Throughout, Catherine essentially states that her entire purpose with Sebastian was to lure men to him. He used her as bait to attract boys for him. It's lurid and tawdry, and fantastic because of it.

Man, am I glad I picked this off the shelf. This is one that’s going to stick with me for a long time. It’s as lurid as anything Samuel Fuller ever directed with the gravitas of some of the best actors of their generation and a story written by the greatest playwright of his.

Why to watch Suddenly, Last Summer: It’s dark in a way that films weren’t dark in 1959.
Why not to watch: If you’re not down for disturbing, you’re not going to be down for this.