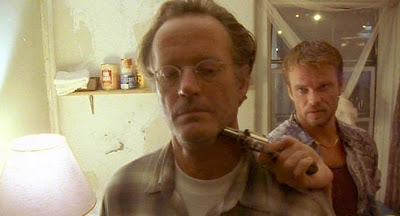 When Ulee’s Gold showed up in the mail, I can’t really say with any honesty that I was excited about it. This is, after all, a film about a widowed beekeeper in Florida. How interesting could it be, right? And, if it really were about beekeeping, it would be a very long two hours. Fortunately for all of us, Ulee’s Gold is about more than bees and about a hell of a lot more than a widowed beekeeper.

Ulysses “Ulee” Jackson (Peter Fonda) is that widowed beekeeper mentioned above. As the film opens, we learn almost organically that he is raising his two granddaughters, Casey (Jessica Biel) and Penny (Vanessa Zima). In the same way, we learn the reason that he has custody of his granddaughters. His son Jimmy (Tom Wood) is in prison for some sort of larceny or robbery. Jimmy’s wife Helen (Christine Dunford) is a junkie hanging around Orlando. The plot starts moving just as Ulee is getting ready to bring in his tupelo honey, the week or two of the year where he makes most of his money.

Jimmy calls from prison. His wayward wife Helen has been discovered by a couple of Jimmy’s old partners in crime (literally), completely strung out. Jimmy asks his father to rescue her, in large part to rescue her from his two friends, Eddie (Steven Flynn) and Ferris (Dewey Weber). And herein lies the problem. Eddie and Ferris are convinced that Jimmy has hidden a large chunk of money from their last job. They want it, and they’ll come to get it whether or not Ulee finds it for them. Ulee discovers all of this when he goes to get Helen, who he brings home to clean up. This involves the next door neighbor, Connie Hope (Patricia Richardson), a nurse, who is not too happy about Ulee trying to detox his sister-in-law.

One of the most obvious knocks against Ulee’s Gold is that it doesn’t know what it wants to be. On the one hand, this is very much a domestic drama. A great deal of the film is about Ulee’s relationship with his two granddaughters and their relationship with both Jimmy and Helen. In no small part, it’s also about Ulee’s inability to get past the death of his wife. If ever this film had a moral moment, it comes a little past an hour in when Penny tells her mother about Ulee’s work with the bees. We see Ulee recover a hive of bees that had been attacked by a bear, and as Penny explains this to her mother, she says that the bees are scared and sting, but you have to deal with the stings and bring them home, because that’s what they really want. Messages don’t come any more packaged than that.

On the other hand, beyond the drug rehab and the learning to connect with his granddaughters, the entire third act is a crime drama when Eddie and Ferris show up at Ulee’s house and tie everyone to chairs in pursuit of the stolen loot. Honestly, it shouldn’t work, but it kind of does. The crime portion of the film is set up early enough that it doesn’t feel terribly jarring when it all happens in the last half hour. But, even though this works as well as it does, Ulee’s Gold still feels very much like two parts of two different movies. This is especially true because the entire third act of the film feels like it should be the whole movie. It happens too quickly to really be satisfying.

Regardless of this, I enjoyed this movie far more than I thought I would. Much of this comes from the performances. Peter Fonda’s nominated performance is prime among these, of course, but his is not the only performance here that’s worth seeing. For the few minutes Tom Wood is in the film, he’s excellent. It’s also a very good performance from Patricia Richardson, who will always be more famous as the mom on Home Improvement. In truth, the one performance I’d like to see improved is that of Penny, who frequently comes across as having memorized her lines.

What I appreciate more than I realized while watching, though, is that Ulee’s Gold doesn’t rely on any cheap tricks. When Eddie and Ferris come for the holdup money, for instance, it’s wedged near one of Ulee’s bee sites. As Ferris goes to get it, Ulee warns him about water moccasins. A lesser film would have Ferris bitten, but we don’t go there. A lesser film, that has established (as this has) that Ulee is a decorated Vietnam veteran, would have him take Eddie’s gun rather than simply kick it into the swamp when he gets the chance. Ulee’s Gold is far too smart for that. It’s even smart enough not to get us to a consummation point of the impending romance between Connie and Ulee.

It’s this intelligence that saves the film. It could have easily been a complete mess, but in the main it works. That’s a function of the performances, but also a plot that doesn’t go for the cheap thrills but plays it for reality. That it goes or something like a scare at the end is forgivable since it does just about everything else right.

Why to watch Ulee’s Gold: Everything you want in a family drama and part of what you want in a neo-noir.
Why not to watch: It’s about three-quarters of one movie and half of another.